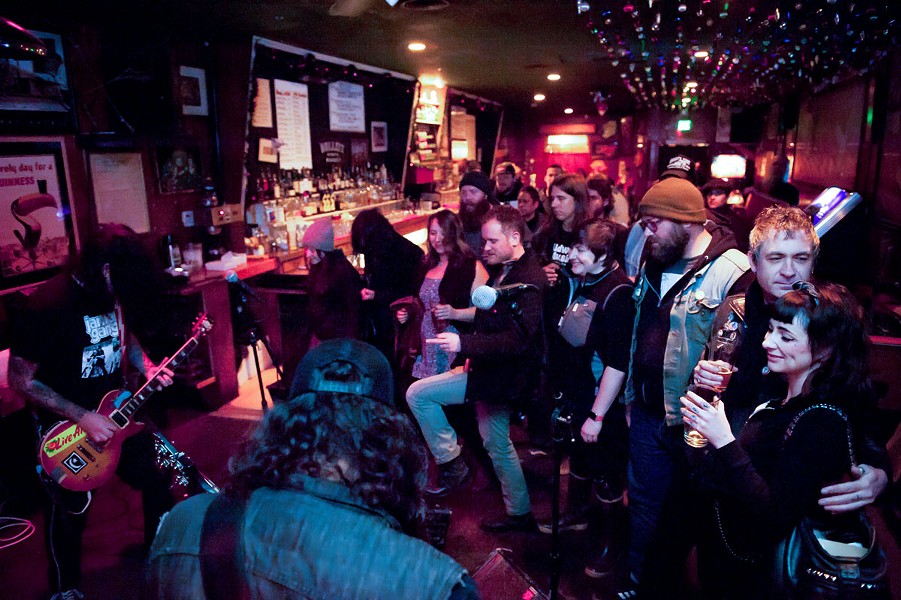 On any given night, you can follow the sound of music and find yourself a good time in Arcata's bars, restaurants, clubs and on sidewalks. Here are five rock-solid places to let the sound of local and visiting acts move you.

The John Van Duzer Theatre on the Humboldt State University campus is the closest thing Arcata has to a concert hall and the diverse schedule dominated by the Center Arts season reflects that. Originally called the Sequoia Theatre, it was rechristened on Nov. 10, 1974, a mere 25 days after the death of its current namesake. John Van Duzer was a beloved member of the theater department and was instrumental in pioneering the technical and stage designs that brought the theater into the modern age. An elegant balconied building with a near 900-person capacity, the venue is renowned for the larger acts which Center Arts has attracted, including artists such as Joan Baez, Marcel Marceau, Joan Armatrading and rising jazz phenome Kamasi Washington's group. In addition to music, the Van Duzer still hosts performances by the University's theater department, as well as acrobatic acts and spoken word performances. Concessions usually include pre-show and intermission offerings of wine, beer and cookies. Certainly on the spendier side of Arcata's live attractions, the Van Duzer's well-curated line-up is frequently still a bargain.

When co-owners Aimee Hennessey and Merrick McKinlay opened Richards' Goat Tavern in November of 2014, they had expansion on their minds. Aimee explains that their vision for The Miniplex, the tiny venue adjacent to the bar, "came when we owned La Dolce Video in Arcata. Customers would frequently bring up what a bummer it was that there was no longer a local theater showing the sort of new independent films we stocked at the shop." Helped by a Kickstarter fund, the Miniplex opened its doors in July of 2015 and quickly became more than just a 32-seat theater for independent cinema. They began booking live music there, as well, moving the rows of seats to the walls for shows to fit a larger crowd. "When you come to a show at The Miniplex," Aimee continues, "you get to see artists like Hawkwind, Imarhan, Abstract Rude or Weyes Blood up close in an unusually intimate setting. One of my favorite musical performances so far was Swedish psych band Dungen performing their soundtrack to a 1926 animated fairytale projected behind them." With a large menu of unique cocktails, teas and local-vore and vegan-friendly food, the bar at the Goat gives Miniplex attendees a refreshment experience on par with the delightful and esoteric entertainment offerings.

Located in the center of Ninth Street's tavern row, The Alibi is a long-running staple of Arcata's music scene. Once just a dimly lit restaurant and bar, recent renovations have seen the addition of a brightly lit dining room and new bar, as well as a patio and smoking area and large, clean bathrooms. However, the dive aesthetics of the old place have not been forfeited, as the original "dark side" of The Alibi has been preserved in all its glory. On a dry-erase board above the pinball machine by the front door, one can find the calendar of upcoming shows booked by long-time promoter and loud-music impresario Ian Hiler. Full disclosure: Hiler used to regularly book my erstwhile New Orleans-born act PonyKiller, and we always had an especially good time playing there. Hiler's tastes trend toward the kinds of music that work perfectly for the Alibi's late-night format: punk, metal and heavy rock bands are generously represented, while lo-fi country groups such as Jenny Don't and the Surs and the noisy astro-blues oddity Bob Log III have a home here, as well. Although Saturday is the traditional night for shows, off-nights are not unheard of if the touring act is good enough. Recently, vinyl DJ-curated dance nights have popped up, too, with tastes trending toward punk, goth and new wave. This large-menu restaurant, bar and venue hybrid is a venerated institution enshrined in the pantheon of Arcata's nightlife.

In 1977 Fred and Joyce Hough started The Jambalaya as a low-key bluesy live music bar just off the Arcata Plaza. In fact, my uncle Jay was one of the first bartenders there, my dad was the in-house carpenter and repair-man and I used to go bird-watching with the late door guy Bert, so the joint has always been dear to my heart. Local drummer and talent booker Pete Ciotti became an owner of the venue in 2009, with its full kitchen, generous stage and room capacity of 219. Thankfully the large Muddy Water painting presiding over the old stage stayed. The Jam, as it is now called, is focused on being a bar and venue now, offering music every night of the week and a schedule which sees a little of everything: weekly comedy shows, reggae groups, electronic acts DJ-spun dance parties, rock and tribute shows, jam bands, funk and rap acts. The Jam's good sound set-up, open dance floor, full bar and prime location make it a great bet for most any party night.

Although the brewery part of the business is long gone, Humboldt Brews — or Humbrews, as the locals call it — offers a broad variety of beers and ciders, many local, as well as a full bar and extensive pub/bistro menu. While half of Humbrews' footprint is dominated by a myriad of screens for the sporting crowd, the medium-sized attached music venue has a large dance floor, an excellent sound system, an intimate but spacious stage and limited raised seating for those not feeling the urge to dance. It also has a full bar and large, clean bathrooms separate from the restaurant; features that all contribute to its rep as one the most enjoyable places to experience live music in Arcata. The schedule is packed with diverse and popular touring acts, with past events, including the indie rock skelter of Built to Spill and the banging lyrical genius of hip-hop royalty's Del the Funky Homosapien. Humbrews also regularly hosts local events, like the hugely popular vinyl-spun dance-stravaganza Soul Party. Humbrews has it all within "Chevro-legs" distance from Ninth Street's bar row.