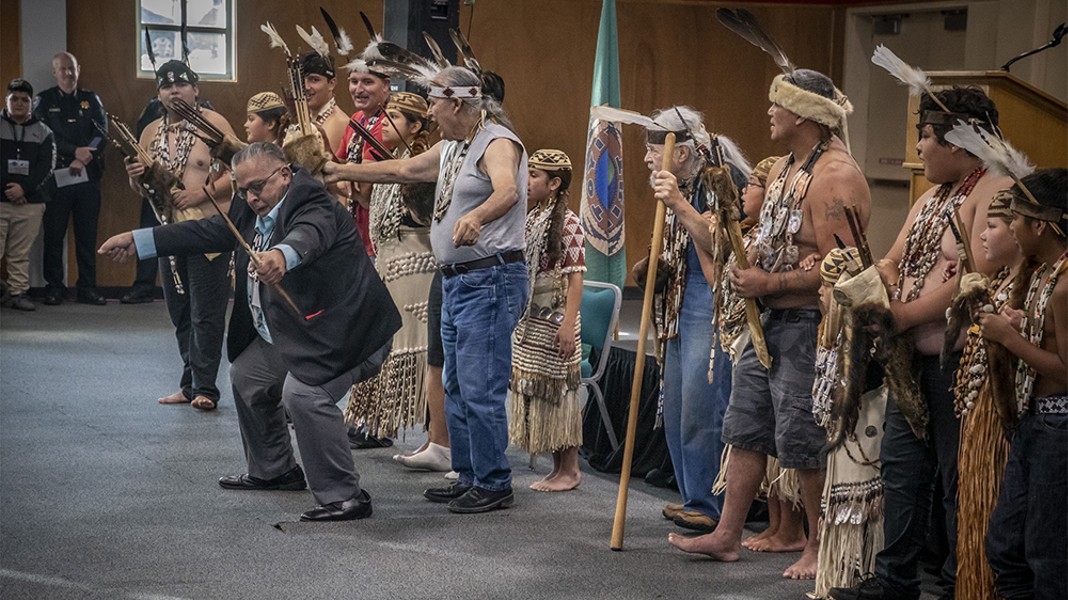 When researching our Jan. 24 cover story "We're Coming Home" about the city of Eureka returning Duluwat Island to the Wiyot Tribe 159 years after it was stolen, we came across a beautiful quote in a 1988 Humboldt Historian article about the island and the egret rookery on its western shore.

"The egrets, in graceful flight, are the spirits of those who were massacred so long ago," reads the unattributed line. "Loathe to give up their island, they hover near, keeping vigil while the island fulfills its time of mourning."

It is with great relief and gratitude that we report in this week's issue that period of mourning is over, that the city of Eureka has finally returned the island to the Wiyot Tribe for whom it is the cultural and physical center of the universe, a place with the spiritual power to bring balance to all else. And while it's important to recognize and applaud the Eureka City Council's courage in taking this unprecedented step — as well as the continued grace the Wiyot Tribe has shown throughout this decades-long process — it's also important to say that this was, in the grand scheme of things, a simple and necessary step.

After all, we're talking about a piece of land that has tremendous significance to the tribe and little value to the city. It's not as though city hall was built on the island or a line of developers was offering seven-figure sums for the land. Quite simply, returning the island was the actual least the city could do.

But that doesn't mean the repatriation came without some courage on the city's part. Quite the contrary, as the city council's act — no matter how morally obvious or overdue — starts a local and national conversation about the return of Native lands. This is an uncomfortable conversation but a much needed one.

There is no skirting the fact that Native people lived for millennia in California until white people came and, with the full blessing of state and federal governments, killed them, removed them and took their land, commodifying it into a pillar of generational wealth. This systematic theft is the foundation for the rampant inequality we see around us. It's why nationally 71 percent of white people own their homes compared to just 53 percent of Native people, according to the American Community Survey, and why the median household income for Native Americans was 31 percent less than their white counterparts.

This foundational theft — not to mention the ensuing 150 years of inequality and discrimination — has ramifications that remain unchanged by attempts to minimize, justify or erase it. Even the former Eureka city attorney's panicked efforts to shield the city from legal liability are nothing in the face of this bare fact of history.

The unalterable truth is that if you own a home in Humboldt County, that house is built on land that was stewarded by generations of Native people until it was violently taken from them. What people individually do with that information and how we as a community make amends for the wrongs of the past is complex. It's also largely unmapped and open to the possibilities of our imaginations, to what we could do and who we have the potential to be.

In reporting that story at the beginning of the year, we asked Wiyot Tribal Chair Ted Hernandez if he'd like to see the three parcels on the island that remain privately owned returned to the tribe, too. He shook his head.

"That's individuals' homes," he said. "We know what it's like to be taken off our land. Why would we do that to someone else?"

Speaking at the repatriation ceremony, Humboldt State University Native American Studies Chair (and Journal contributor) Cutcha Risling Baldy said when she's often asked by well-meaning people what they can to do to make up for the wrongs of the past, her answer is simple: "You need to give all the land back."

These are conversations we need to have. We can't move beyond the atrocities of the past without speaking honestly about their continued reverberations. Eureka has taken a laudable first step. Let's honor that by viewing it as such, the beginning of a local process to put land back into Native hands.

Jennifer Fumiko Cahill is the Journal's arts and features editor. She prefers she/her/hers pronouns and can be reached at 442-1400, 320 extension, or Jennifer@northcoastjournal.com. Follow her on Twitter @JFumikoCahill.

Thadeus Greenson is the Journal's news editor. He prefers he/him/his pronouns and can be reached at 442-1400, extension 321, or thad@northcoastjournal.com. Follow him on Twitter @thadeusgreenson.com.