Tribute to The Band at the Jam, plus music for midwives, Jackstraw and 'something for everyone 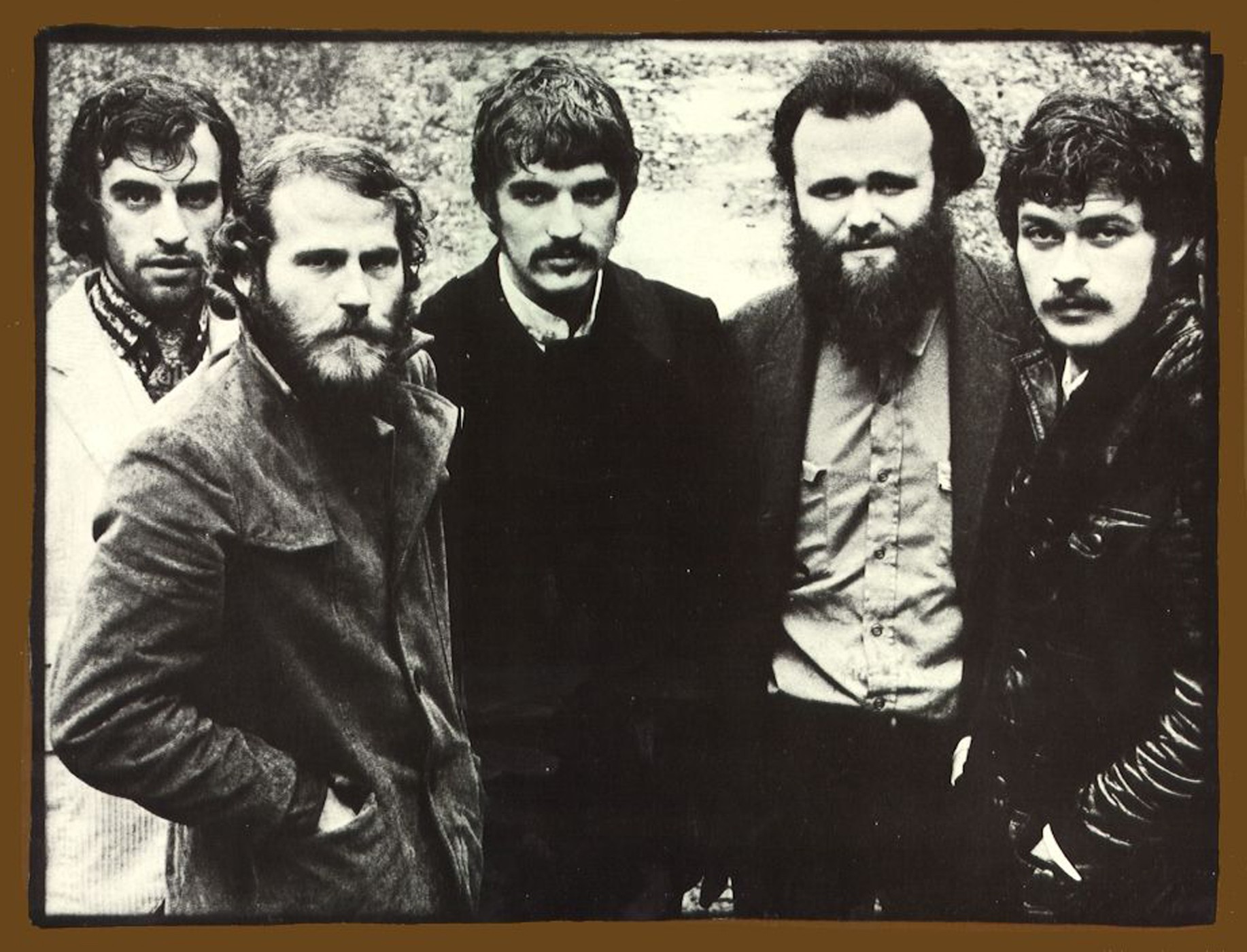 It was hard to miss the sad news earlier this year: Levon Helm, drummer for The Band and the vocalist on classic songs such as "The Weight," "Up on Cripple Creek" and "The Night They Drove Old Dixie Down," died after a battle with cancer.

This Friday at the Jambalaya a group of local musicians offer a special memorial to Levon and a tribute to The Band. Piet Dalmolen, Pete Ciotti, Pat Quinn and Jay Forbes from Full Moon Fever (the Tom Petty tribute) join with Matt Engel and Johnny Fiya from Naive Melodies (the Talking Heads tribute), Rich Kearns from The Bucky Walters and other special guests. Chris Parreira will open with a few solo numbers. "We did a Band tribute a few years ago and have been wanting to do it again ever since," said Dalmolen, "and with Levon's passing, the time seemed right." Indeed it does.

Then on Saturday night, post-Oyster Fest, again at the Jam, Full Moon Fever shifts back into Petty mode for a "farewell for now" show. That's right, after a successful run playing festivals, nightclubs and casinos, the tribute is going on hiatus. "It's ‘for now' because we have no shows planned and we want to focus on other things," said Dalmolen, "but I'd be truly surprised if we never played again. After this weekend it's on to new things."

Ciotti echoed his Nucleus bandmate saying. "We've all been aching to do something original," he said. "One door closes and two open." For example, Dalmolen said he's heading up a new "experimental/instrumental thing" with Ciotti, among others. "Pretty fun for me to have a blank canvas, haven't had that in 12 years," he said. Ciotti filled in more details, saying he'll be one of two drummers in an as-yet-unnamed band that will include members from Moo-Got-2 and Bump Foundation. Pete's also joined another new band led by Bump guitarist Greg Camphuis, "The Motherlode, or maybe just Motherlode -- a huge funk band." Sounds good to me.

The seed for another Friday night show was planted in a Facebook post by obsessive social networker Monica Topping. She wondered what her friends would think if she threw a benefit to help cover the cost of a pending home birth, her own. While she has health insurance through HSU where she works, it does not cover her midwife fees. The resulting conversation soon veered off into advice on childbirth and the like. No one seemed to object to the idea of having a party for soon-to-be-born baby "Peanut" -- in fact, people loved the idea. Thus we have the "Rock Your Body" fundraiser Friday at Arcata Playhouse, a "family friendly" event raising awareness and money for midwives and for North Star Quest Camp, a local outfit "devoted to fostering confidence and self-respect in adolescent girls" via summer camp experiences. The eclectic music lineup includes alt. rock by Splinter Cell, alt. country by Gunsafe, alt. pop/rock/reggae by The Karmanauts, human jukebox Rick Fugate's Unadulterated Accordion, the suave Bret Bailey doing his Neil Diamond thing, "hella gay" DJ Anya and future dad DJ Gabe Pressure. Bring extra cash for food and drink (benefitting NSQC) and for the silent auction benefiting midwifery.

As if that's not enough to do on a pre-Oyster Fest Friday in Arcata, writer/raconteur Jeff DeMark is at Northtown Books accompanied by my friend (and radio co-conspirator) Vinny Devaney on harmonium, percussion, brass horn and his brand new custom-made hurdy gurdy, along with guitarist, blogger, genius graphic artist and occasional Journal contributor Deric Mendes (who, sadly, is leaving Humboldt soon). DeMark notes, "To my sensibility, the golden triangle of communication is songs, stories and poems, and that's what I'm going to offer on this night."

Saturday's Oyster Fest has lots of great music -- read all about it in the calendar. Directly after O-Fest (5-7 p.m.) Mazzotti's has an afterparty featuring new local heavyweight rockers Angel's Cut, a rare all-ages event for the venue. Later on, The Fickle Hill Billies and The Rezonators rock Humboldt Brews, offering completion to the above-mentioned Full Moon Fever farewell at the Jam.

Thursday at the Jambalaya, C-Baker hosts "Something for Everyone," a night of "meaningful, positive, soulful music" ranging from reggae to African to hip hop, with performances by Ishi Dube, Vidagua, Berel Alexander, Ju'drum, Mykal Somer, Damian Quintal and Mr. Ocean, Elephant Dub Brigade Band, Guinea Gbe, DJ Gobi and rapping by C-Baker himself.

The Eureka Summer Concert series runs Thursday evenings for the next nine weeks at the new Fisherman's Plaza at the foot of C Street. This Thursday it has Jackstraw, a rockin' bluegrass outfit from Portland that calls its sound "Northwest mountain music." For the band's last record, Sunday Never Comes, then-Portlander Cory Goldman (of The Water Tower Bucket Boys) was enlisted to add serious banjo chops. As you might know if you follow the local string scene, Goldman left Portland for Arcata earlier this year, causing The Bucket Boys to change their name to Water Tower while downsizing Jackstraw from quintet to quartet. Guess who will be reunited with his former bandmates for their Eureka show?

Also exploring the boundary between bluegrass and rock is Rose's Pawn Shop, a band up from L.A. for a Tuesday show at Humboldt Brews with a sound that's allegedly "a wholesome mishmash of creek mud, rusty nails and your mom's cookin'."

Fans of straight-ahead country will want to check out young Ashley Buchart, a Nashville-based singer playing Sunday at Central Station.

S.F.-based fingerpicking resonator guitar player/songwriter Clay Hawkins is on the road behind a new album, Road Soul One. His tour brings him to Humboldt for several shows: Thursday he's at the Beachcomber in Trinidad, Friday at Fieldbrook Market, Saturday he gets the day off (to eat oysters perhaps), and Sunday afternoon he plays for a "Father's Day Picnic and Musical Celebration" at Mad River Brewing with special guests Tofu and Eddie Arnold Jr.

The Silver Lining at the Arcata Airport has experimental music Friday night, an arty McKinleyville Arts Night show by the amorphous combo thelittlestillnotbigenough. Saturday night (and every Tuesday, and soon every Saturday) owners Damian and Mandala Lakey are trying something new: Good and Evil Twins Karaoke, with Damian and his twin brother Joshua manning the karaoke rig that once belonged to G-Money (who has retired). Says Mandala, "Since we have always had such a great time at karaoke, we took over the equipment from him and adopted the Good and Evil Twins name. We embrace everybody's secret desire to perform on a stage, and forgive any lack of natural talent (and our own!) by filling the evening with lots of cheering and fun."

The folks at Swain's Flat Outpost out Highway 36 near Carlotta are throwing a benefit all day Saturday to help their friend Sky Blue get back on her feet after her house in Bridgeville burned down. They'll fire up the BBQ around noon for chicken, burgers etc., and there will be wine and beer for sale and a raffle -- the usual fundraising stuff. Music is by Lanny and George, followed by The Mountain Yeti and The Hunz, then, around 6 p.m., guitar wizard and one-man-jamband Scott Huckabay. He works the summer festival circuit with his bag of percussion instruments, looping devices and other effects. Coming up later this summer at the Outpost: The Donna Jean Godchaux Band with Mark Karan on guitar and Mookie Siegel on keys (July 28), and New Riders of the Purple Sage (Aug. 11).

The Placebo rides again at Ink Annex next Monday with more fast, hardcore crust-punk: Appalachian Terror Unit from West Virginia, Kontrasekt from Minnesota, Frustration from Washington state and Arcata's Kom(A)Tose. As always it's all ages -- "no drugs/booze." Ride on!