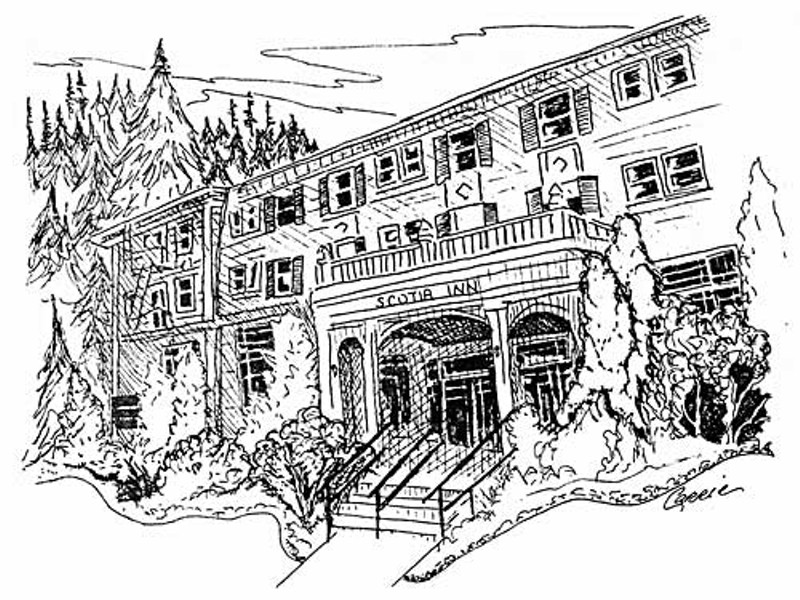 For $2.5 million and a couple of bucks, you can own a pretty chunk of history whose interior décor speaks of a more elegantly boastful time -- a time when it was OK to be a timber baron, or a logger. And, the more romantic among us might imagine, it is like a leftover industrial love-note to the redwood tree. Just look at the wood relief carving of a tall redwood, and the giant black-and-white photographs of old-time forest harvests, sunk into wall panels in the gigantic lobby. See the grand old dining room, the dark-toned pub -- heck, the entire three-story 1923 structure was built of redwood.

Yep, the Scotia Inn, in Scotia, is once again for sale. The inn's been on the block before, and under its former owner, the Pacific Lumber Co., was closed for a few of the last years of PL's dimming reign. PL went bankrupt, and last year the inn and town of Scotia came under the ownership of Marathon Structured Finance Fund LLC, a major PL creditor, under the name of Town of Scotia Co. LLC. The sawmill went to Marathon partner Mendocino Redwood Co, which renamed the operation Humboldt Redwood Co.

"I do a lot of business in Humboldt," said Durham last week by phone. "In the last five years, my company has sold at least 10 motels in Humboldt County."

While one may wonder about that turnover, Durham said Humboldt's actually in a bubble and the hotel business in our neck of the woods is resilient, even in economic doldrums. As of April, he said, hotel occupancy numbers have been ticking up. And the Scotia Inn, despite its tumultuous recent past, remains popular among the wedding, fêting crowd -- its banquet room is booked every weekend through December.

Still, whoever buys the inn will want to come with experience, said Durham. The inn has just 22 rooms, plus a third floor that's stripped and closed but has the potential for 25 to 30 more rooms.

"Twenty-two is cute, but that whole third floor will make it a solid business," Durham said.

Meanwhile, the Town of Scotia Co. isn't letting it moulder. On May 1, local caterer Jeanne Dorris took over management of the inn and pub. And this past Friday, Dorris held the pub's grand re-opening.

Frank Bacik, Town of Scotia Co.'s vice president and director of legal affairs, last week said the inn's sale can help Marathon recover part of the interest it had in Pacific Lumber Co. "It's an integral part of the town," Bacik said. "It attracts tourists and is an amazing facility -- but we're not in the hotel business."

However, Bacik said, nothing can't be sold in fee at this point because a subdivision of the entire 400-acre town -- which exists on one tax parcel -- hasn't been completed. "Separate buildings and homes can't be sold in the usual way. But a long-term lease could be given, contingent upon the ultimate subdivision."

Eventually, the other town assets also will be sold off.

"We have a hardware store and a post office, two churches, a water/sewer treatment plant, a fire department," said Bacik. "Nobody in the world is equipped to operate that wide variety. It was a company town, and it was sort of an anachronism with respect to the sort of patronage that Palco exerted over the entire village here. And all of these things can be run better than Palco ever did and better than any single business can do."

The subdivision process involves an environmental review of the subdivision master plan, a General Plan amendment and a rezone. The final environmental impact report is out -- you can read it on the town's Web site, and elsewhere. And it comes before the Humboldt County Planning Commission on June 4, Bacik said.