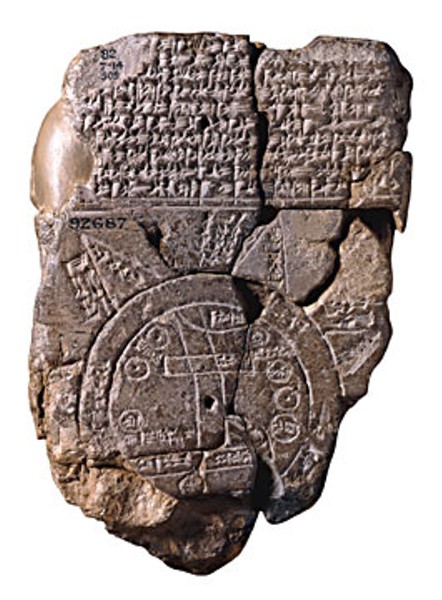 The Babylonian Imago Mundi, dated to the 6th century BC, shows Babylon on the Euphrates surrounded by a circular landmass with a seven-pointed star corresponding to the seven heavenly "wanderers." (British Museum/public domain)

Every seven days, a new edition of the North Coast Journal appears in Humboldt County, regular as clockwork. What's so special about seven that it forms the backbone of our calendar? After all, the week follows no natural cycle, as is obvious when you realize that other cultures have gotten along quite happily with three day weeks (ancient Colombia), four (much of Africa), eight (early Rome), ten (ancient Peru, revolutionary France), and even 19 (Baha'i religion).

When we agree to call the first day of the working week Monday ("moon-day"), we're keeping a particular faith, dating back to at least 100 B.C., that maintains that every seventh day is ruled by the moon: Our ancestors have acknowledged every seventh day to be the moon's for over 2,000 years. Like an endless chain letter, and despite adjustments to the calendar, the cycle of days of the week has been maintained faithfully by the Greeks, Romans, Angles, Saxons, Vikings and all the rest who came before us. We just happen to be the latest generation to keep the faith.

Monday/moon-day might give you a clue why we have seven days in our week. The moon is a bright astronomical object, as is Saturn (Saturday) and the sun (Sunday). That takes care of three of the seven moving sky objects known to the ancients. The other four days correlate to the rest of the bright "wanderers" (= planets in Greek), whose names in English come from Norse theology under the influence of Angles, Saxons and Jutes who settled England in the so-called Dark Ages. Because most of the Nordic gods were associated with Roman gods during the heyday of the Roman Empire, we can trace those names back to Roman and Greek sources.

Tuesday: Old Norse Tiw, the Teutonic god of war, was identified with Rome's Mars. The Old Norse name is cognate with Latin deus (god) which in turn comes from Greek Zeus, "father of gods and men." (To complicate matters, Zeus was identified with Jupiter in the Roman pantheon, but he gets his own day, Thursday.)

Wednesday: The day of Wodan, or Odin, was connected to Mercury by the Roman historian Tacitus.

Thursday: Thor, eldest son of Odin, was the Scandinavian Vulcan, god of thunder. He's associated with the Roman planet and god Jupiter.

Friday: From Freya or Frigga (curiously cognate with ‘free'), Scandinavian goddess of love and wife of Odin. As the female member of the pantheon, she's partnered with Roman Venus, who in turn is connected with Greek Aphrodite.

Seven bright wanderers, seven days in a week: It's written in the stars. See you next week!