Unearthing the lost cuisine of the fantastic Erba Verde Islands 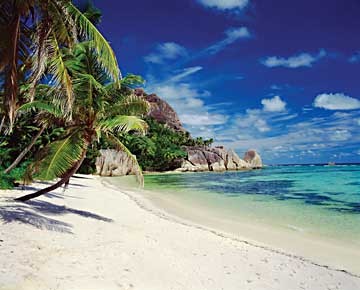 The islands of Erba Verde, reached by secular humanists fleeing the late 15th century Venetian tyrant-priest Girolamo Savonarola, remained a lost, mythical place for centuries. Tales of this magical land, whose name could mean "green grass" or "green herb," fascinated the Portuguese and Spanish, but did not distract them from their obsessive pursuit of gold.

The Italians, mostly educated men, families and servants, found in the archipelago another group of refugees, ones who had escaped the blood sacrifices of the Aztec Empire. The two groups intermarried. The history of the founders' experience with religious excess made secular society seem attractive. Class, race and educational differences were gradually subsumed by consanguinity and the need for communal endeavor.

The settlers, faced with the increasing threat of colonial warships, set about discouraging intruders by making their harbors treacherous and quietly disposing of persistent unwanted guests. Many of the mysterious ship disappearances attributed to "The Bermuda Triangle" were hapless adventurers who got a bit too nosy. A century passed, then another. The world roiled and blustered, colonial empires rose and fell, and Erba Verde went its uncharted way, far from the sea-lanes of commerce and conquest.

Island life seemed good. The agricultures of Northern Italy and Mesoamerica made a felicitous marriage. Wheat and corn alike thrived in the warm air of the Gulf Current, chilies and chicory, avocados and artichokes, cucumbers and squashes, almonds and oranges. A dwarf red banana palm was indigenous, as were bay grape trees (Coccobola uviferal) and juniper. Wild herbs grew, vaguely similar to thyme, epazote, sorrel and basil. A native allium was cultivated and selectively modified.

While beef was not known, the pilgrims had brought goats and turkeys. A strain of wild ducks was domesticated, as was the native warthog (Potamochoerus larvatus bermudamus), providing a slightly gamy alternative to pork. Seafood, of course, was abundant and hugely varied, from conch to giant sea turtle, a meat similar to veal.

Thus over the centuries Erbe Verdan cuisine came to include elements of both Renaissance Venetian and Aztec cookery. Not, of course, the modern traditions of Northern Italy or Mexico. In the absence of tomato, sauces were livened by orange juice, fermented bay grapes or juniper berries. There was no wine or beer, but a strong pulque-like ale was made from palmetto root. Bees were not native, so there was no honey — un-refined sugar was derived from bananas.

Chocolate seems to have been cultivated (the Aztecs had used a monetary system in which a turkey cost one hundred cacao beans and a fresh avocado was equal to three), although at 25 degrees latitude the islands are a bit too far north for optimum¬†production, so the fruit was not abundant. Coffee was unknown. On the other hand, the growing season was equatorial, and the locale out of the main path of tropical hurricanes.

The single source of culinary detail can be found in a slim handwritten journal that somehow found its way to Italy in the late 19th century: La Cucina da Erbe Verde. From it, we can imagine a menu. I've given first the names of dishes and probable sources, then a description of how one might go about preparing a close analog to the original.

Of course, any attempt to duplicate the native dishes must be an approximation. (For instance, the native salsa guajillo uses sour bay grapes, whereas the Mexican version has tomatillos.) But let's give it a try.

The first course is easy. Thinly sliced sashimi grade albacore or yellowtail (Japanese amberjack), with sea salt and very good virgin oil; serve over baby greens, tossed with a tiny bit of oil and a squeeze of lemon.

There are creameries that make true goat's-milk mozzarella, but I recommend Cypress Grove's "Mad River Roll" or plain chevre. Dip half-inch slices in egg, then breadcrumbs and sauté in plain olive oil (not too hot) until brown on each side.

Salsa Guajillo: Put 10 husked tomatillos and three stemmed dry guajillo chilies in a pot, cover with water, bring to a boil, then simmer for five minutes. Add a clove of garlic and a thick slice of onion and let sit five minutes. Transfer to a blender with a slotted spoon, add salt and blend five seconds. There should be some texture.

Mole Poblano is a complex recipe with too many ingredients to attempt here. I would see if I can buy a pint from Carmela's (Arcata and McKinleyville). Goat sausage is not available locally. Try Premiere hot Italian sausage, skinned and cut into inch-long pieces. Brown it in oil, then remove the meat, add onion and garlic, diced vegetables and simmer. When everything is al dente, return the sausage, add the mole and heat until just done. Serve over broad noodles. (Bionaturae pappardelle, available at Ray's in McKinleyville, is excellent.)

Halve small butternut squash, scoop out seeds and pith, then salt and sprinkle with sweet spices like cinnamon, anise, nutmeg and chile powder. Put two teaspoons minced prosciutto, pancetta, or smoked bacon in each cavity, then bake in a 375-degree oven about an hour, or until fork-tender.

Braised chicory is similar to braised fennel. Cut and discard stalks from two fennel bulbs. Cut bulbs lengthwise into 1/2-inch-thick slices. In a 12-inch heavy skillet, heat oil until hot but not smoking, then brown fennel slices, turning, for three to four minutes. Reduce heat to low. Sprinkle fennel with salt and pepper, then add chicken broth and/or white wine. Cover, and simmer until fennel is tender, six to 10 minutes. Sprinkle with vinegar and chopped fresh parsley.

Use not-quite-ripe red bananas if possible (firm). Do not peel, but cut each one into two cylinders, which will bake upright. Discard the ends.

The stuffing ingredients get mixed together to form a thickish paste. Who knows what exotic nuts or seeds the Islanders used? I'd suggest grated coconut (reconstituted with water if dry), toasted, ground pumpkin seeds, almonds and/or pine nuts, orange zest and a Serrano chile, seeded and finely minced. Mix with salt and a small amount of yoghurt, whey, buttermilk, sour cream, whatever. You'll need about a teaspoon of mixture for each banana half.

On top of each banana piece cut a cross about 3/4-inch deep. Using your hands, stuff the paste into the cuts. This will seem awkward; it is awkward. When you have stuffed all pieces, use any remaining filling to shmush around the top, covering the surface as much as possible. Then place the bananas on a cookie sheet or in an oven dish and cover with film until ready.

To cook bananas: Heat oven to 325 degrees. Place pieces on a baking sheet and bake for 20 minutes. The skins should be black and the flesh soft. Serve immediately.

An interesting aspect of Erba Verdan cuisine is that desserts (as with traditional Mandarin food) are not sweet. Who knows why? The Aztecs didn't do dessert — their use of chocolate was as a bitter stimulant and aphrodisiac. In Europe, sugar was part of the main course, with countless medieval recipes for meat stewed or baked with dried fruit. "Mincemeat" and apricot-stuffed pork roast are legacies of that mostly forgettable practice.

Times change. Nowadays, with Bahamas Air providing regular flights to EVX, the culture of the islands may disappear entirely. Already there is talk of offshore banks, casinos, deep-sea tourist adventures, an "Erba Verde Marriott." A celebrity chef is said to be negotiating for a restaurant to be called Bermuda Triangle.

The Erba Verde lesson is cautionary. We are reminded of just how fragile are our lives and our transient culture, and how precious the moments we can savor.