Forging Ethnic Food – The first in a series of culinary fakeries 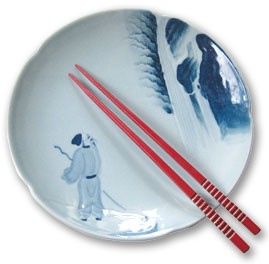 I’m obsessive about culinary authenticity. Even in daily meals at home, I confess to being distressed if smothered pork chops and guacamole share the same table. Or pasta primavera and bratwurst, ouch! The discontinuity is almost painful. My mate indulges this nerdy compulsion. We tend to have ethnic continuity — Spanish, Jewish, Southern American, Italian, French, Mexican, New York Deli, Caribbean, German — usually depending on what’s available, or on special.

If we defrost a pint of Texas chili, we need cornbread, pasta, rice or some other “authentic” form of carbo. If it’s Chile Verde, we go for frijoles de olla and fresh tortillas from our local Mexican restaurant. Fresh ground lamb patties we blacken and have with garlicky hummus and warm pita, maybe a tabouli salad.

I am a slave to ethnic consistency.

But I also love impertinence. And inventive mischief. My idea of a fine culinary prank is to make up imaginary dishes that aren’t — but might be — genuine ethnic cuisine. Today’s column re-imagines the idea of an exotic Asian meal (each dish serves 4).

For this, I prefer Wild Oaks Grill smoked pork loin, which I request rare. Yeah, public-relations-wise, rare pork is absolutely taboo. In actual fact, however, trichinosis is non-existent in today’s hygienic commercial farms. As far back as 1986, according to the federal Center for Disease Control, commercial pork products were implicated in only three isolated cases of trichinosis. Today, virtually the only source of the Trichinella spiralis parasite is wild boar meat. Or bear. (So if you are offered bear carpaccio or wild boar sashimi, pass. Otherwise, don’t worry about it.) However, the dish can also be made with chicken from Porter Street or Wildberries.

To make the Chengdu barbecue sauce , mix the following ingredients, bring to a simmer in a saucepan, let sit a few minutes, and put into a small pitcher, or serving dish with a spoon:

For barbecue mixture, heat oil in a large sauté pan on a medium-high. When hot, add the prosciutto strips, a few at a time, turning after 15-20 seconds, and remove to drain on paper towel (they should be crisp). Keeping oil hot, add chilies, scallions, and bean sprouts, and cook only long enough to wilt the vegetables, then add pork or chicken cubes, toss to coat and empty the whole thing into a covered serving dish, keeping the prosciutto and cilantro aside.

When ready to serve, microwave the dish and serve. Let everyone assemble individual lettuce wraps with the meat mixture, prosciutto and cilantro, adding sauce at the table.

In a heavy skillet, brown all ingredients over medium high heat, stirring. When browned, mixture will begin to smoke. That’s OK. Remove from heat when it begins to clump together like peanut brittle, leaving it in chunks, then stir while it cools, so it doesn’t become a single solid clump. (This is an addictive snack, so if you make more than the salad requires, you win!)

Dressing — combine and shake in a screw-top jar:

To serve, add Cracker-jack to bok choy mix, dress with half the dressing and toss. Add more dressing carefully, bit by bit, not allowing mixture to get soggy.

Of course, depending on how far you might want to carry the joke, you might tell your guests that Chengdu barbecue was formerly panda, but because of endangered species regulations, the actual dish is now made with rat. Genuine Mongolian bacon, of course, is made from cured horse. And mung bean sprouts substitute for the original wild bamboo shoots (which are now reserved for the protected pandas). As for the salad, legend tells us that a case of American Cracker-Jack was found floating in the South China Sea by fishermen from Haiphong — the rest is history.

I realize that I’m being offensive to only a couple of ethnic groups, but I hope in the future to be more inclusive.

After I sketched out this column, we dined at Arcata’s Three Foods Café, and I discovered that I’ve been scooped again. Three Foods does a marvelous job of inventing ethnic food that never was, and they do it with panache and humor. Their “Satchmo,” for example, implies New Orleans without getting into the down-and-dirty of ham-hocks, red beans and rice.

Instead, they make a cheddary polenta. (Which they call “grits.” Senator, I know grits, grits are my friend, and these are not grits. The only way to make good grits is to first get them properly stone-ground, imported from Virginia). The polenta is topped with thin strips of linguica sausage, pan-fried shrimp and sautéed baby green beans. It’s brilliant. Totally not Southern, of course, but it captures the essential concept beautifully. Other dishes betray a similarly insouciant shrug regarding “authentic.” [ Ed. note: Three Foods very recently updated its menu (a regular thing) and Satchmo has been replaced by another faux Cajun dish, a pasta invention called Hibernation Preparation. ]

This represents, I think, a much-needed impudence toward the restaurant concept known as “Pacific Rim” or “Fusion.” The West Coast has been a proving ground and test market for a lot of what is becoming mainstream in American restaurants. The marriage of such preparations as sushi, sashimi, foie gras, caviar, tempura, samosas, pot-stickers, crisp-skin preparations, kimchee, chutneys, exotic seafood, Kobe-style beef, wild mushrooms, local produce and local cheese has led to an explosive growth in inventive menu items.

But none of that’s what I’m trying to do with Forged Food. Rather, I’m talking about something that is a deliberate fake, more like Three Foods Café, something in the spirit of whimsy, rather than extravagance and genius.

Well, because too often we care more about the provenance of a creative work than its intrinsic value. For instance, there’s a little girl in upstate New York whose abstract paintings sell to serious art collectors. A recent documentary suggests that she’s actually being coached by her father. In the former instance, her works sell for thousands of dollars; in the latter, they might not be worth more than any college student’s.

This is a close-up view of the innate hypocrisy of aesthetics. Surely the intrinsic value of something is what we should care about — is it beautiful, does it sound fascinating, does it taste great? But more often than not, we don’t care about that. What we do care about is: Was it truly painted by Jackson Pollack, was it really written by Avril Lavigne, was it the actual wine from Thomas Jefferson’s cellars?

Why should it matter?

So forged dishes are one way of gently treading on the edge. Of course it’s not fraud, since they aren’t for sale. But I like making them, because I get to be playful, and because they are reminders that preconception is as important as perception in how we think.

Of course, there are fortunes to be lost if a previously authenticated work turns out to be faked. But the people who spend those fortunes deserve to be defrauded. Because in the larger sense, the whole idea of “forgery” devaluing something is absurd. If it was good, it’s still good, whether it was made by Pablo Picasso or Pablo Moskowitz.

Does this contradict my entire opening premise about authenticity in cuisine? Probably it does. Good.