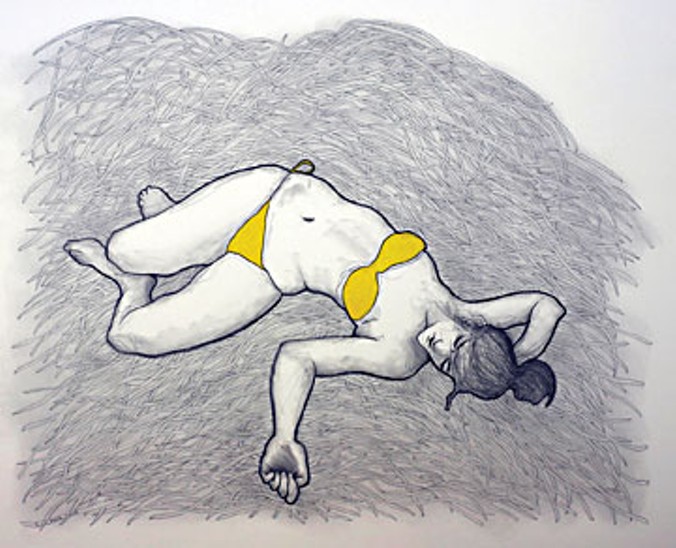 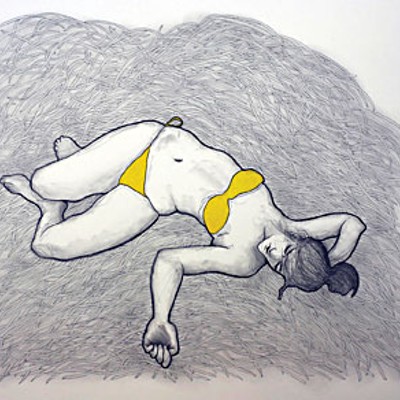 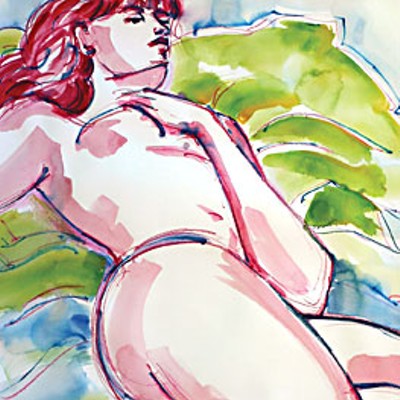 When I got an e-mail from Steven Vander Meer about the Life Drawing show at Good Relations in Eureka, it occurred to me that I haven't written much about one of the most popular of artist's subjects: the human form. On the surface, the reasons for painting the figure are pretty obvious. We like to look at ourselves. But upon closer reflection, there is more to it than pure narcissism.

For the artist, the human form presents the greatest challenge. No other object do we know so intimately, and thus every complicated detail must be rendered accurately in order to be convincing. Ronald Reagan once said that if you've seen one redwood you've seen them all. While the vacuous stupidity of this statement is undeniable, it is true that few of us are so familiar with any one tree that we would recognize it if a limb was drawn too short, or a leaf was out of place. Make a human arm too short, however, and the viewer will not be able to get past that proportional error.

There's another aspect of drawing the human figure that separates it from everything else. The human being is the only artist's subject that has an understanding of what is happening. No other subject can engage with the artist and develop a relationship with them. The human model has an awareness of being looked at, both by the artist and ultimately by the artist's audience. This awareness, however subtle, is as much a part of the painting as the curves of the body or the colors of the skin.

Vander Meer explained that his favorite models are the ones who are interested in what's going on and actively collaborate with the artists. It's a relationship, and a unique one. “It's lovely to capture the essence of someone,” says Joyce Jonté, who teaches life drawing as well as practices it. Although she's drawn hundreds of figures in her career, she hasn't tired of it yet. “It's different every minute,” she says. “The more you draw, the better you get.”

The artists that will be showing at Good Relations are all part of the Arcata Life Drawing Group, which has been meeting weekly for over 10 years. “It's like a workout session for artists,” is how Vander Meer describes a drawing session. The group meets in a cramped space in the Stewart Building in Arcata where a model poses for the group. Longer poses are sometimes employed, but artists often work with a series of short poses, maybe only 30 seconds apiece, in order to flex their intuitive drawing muscles and turn off that part of the brain that wants to micro-manage.

Normally, the models are nude, but for the Good Relations venue they decided to try something different. In keeping with the spirit of the place, the work in this exhibit will include drawings and paintings of models wearing lingerie.

Now artists will tell you, and there is truth to it, that drawing the nude figure is not about sex. As I said, it presents an enormous technical challenge that engages the artist's mind, and the aesthetic beauty of the body stirs the artistic soul. But we're all grown-ups and we know that you can't look at a nude figure without making connections to sex and sexuality. Throw in the lingerie, and you've definitely moved yourself into the realm of eroticism.

Which brings us to another question. We've looked at why artists want to draw the figure, but why do the rest of us want to look at it? Whether we want to believe it or not, sexuality has a lot to do with it. Biology has a lot to do with it. In his book The Undressed Art: Why We Draw, Peter Steinhart writes, “Our brains are programmed to give us an intense interest in faces and figures.” He describes a Bay Area Models' Guild benefit in which 25-30 models pose for a large group of artists in a gymnasium-sized studio, and says that if you were to see the display, whether or not you are an artist, you would find yourself “fascinated with the variety and immense range of difference in bodies” and eventually realize that “there is something fundamentally human in your curiosity.”

Our inhibitions about the nude figure stem from tired religious dogma that never fully explains what the problem is. What's wrong with lustful thoughts? Sex feels great, releases tension, promotes loving relationships and it's free! Sounds like a good thing to me. So even if this show were all about sex, I'd be for it.

But the aesthetic beauty of the figures transcends sex. I have long been an admirer of Jonté's elegant paintings, which emphasize the languorous lines of her models. She uses color minimally and her lines are strong and captivating. In contrast, Rick Tolley emphasizes color and textural detail. He's much more of a landscape painter than Jonté, and that sensibility shows up in his work. Steven Vander Meer has taken his art into an interesting medium -- he makes fine art rubber stamps. In this show, he's not working with the stamps, but the cartoon-like, heavily outlined style of a stamp is present in his renderings. All in all, it will be a varied perspective on the ubiquitous nude.

The show will be up at Good Relations in Old Town (223 2nd St., Eureka) through the month of October, with an opening reception during Arts! Alive from 6-9 p.m. Saturday, Sept. 6. The artists are: Nancy Ensign, Paul Fabian, Joyce Jonté, Jim McGee, Megan Sandstrom, Rick Tolley and Steven Vander Meer.