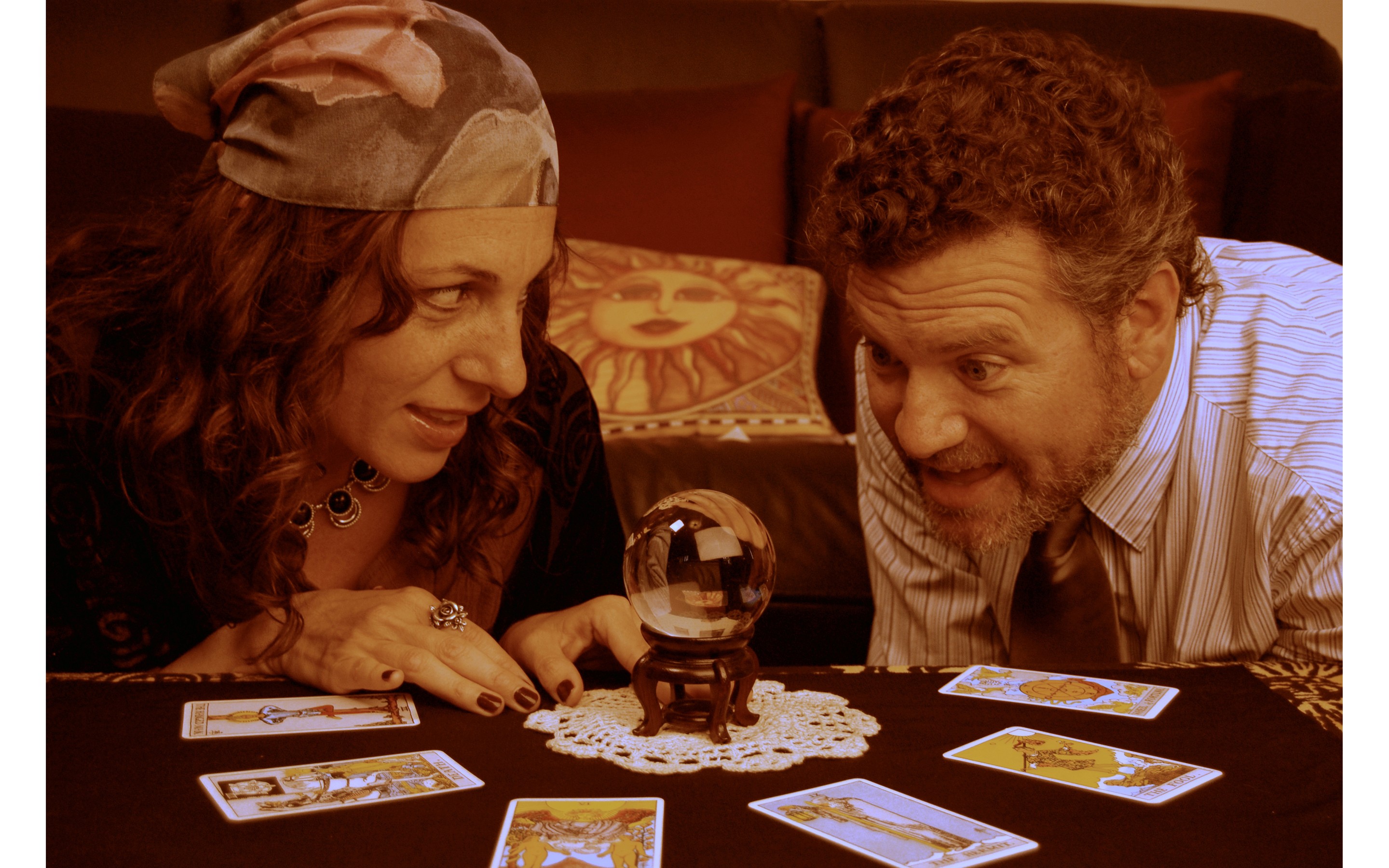 The mysterious Madame Rosa, whose unveiled name is Maude, is a young fortune-teller with a phony accent and an identity crisis. Her mother and grandmother, predecessors in the divination biz, convinced her of ironclad fate. But she longs for other possibilities.

Jeremy is a sweet but suicidal accountant, tired of being unloved and apparently unlovable, at least since his mother died when he was a child. But before ending it all he hedges his despair by consulting Madame Rosa. She foresees his bitter end, but out of fear and pity (and later other emotions), she lies to him and promises he'll find love with a red-haired woman he will meet on the nearby Brooklyn boardwalk.

That's the premise of Fortune, the comedy now on stage at Redwood Curtain, and you can pretty much write the rest of it yourself. But as directed by Jyl Hewston, and performed by Clink Rebik as Jeremy and Cassandra Hesseltine as Maude, the fun is in the journey.

Though Rebik is an accomplished director as well as Redwood Curtain's artistic director, and Hesseltine directs RC's acting conservatory program, they've rarely appeared on stage hereabouts in recent years. Which is too bad, as this show demonstrates. Rebik proves himself a magnetic comic actor from the first moment, and Hesseltine navigates the changing moods of her character with grace -- as well as her redheaded variations (her Southern coquette reminded me of Irene Dunne in My Favorite Wife.)

Between farcical boardwalk impersonations, the two build a delicate relationship back in Maude's apartment, where she maintains her Madame Rosa disguise. But the scene on the boardwalk when Maude appears as herself to the unsuspecting Jeremy is magical, and Hesseltine especially is wondrous. It suggests what these two actors might do if given more than comic clichés and murky subtext to play.

For Fortune, at least in this man's eyes, is a play with its own identity crisis. Written by Deborah Zoe Laufer, a much-lauded young playwright, it is not fast enough for farce and not dimensional enough to be romantic comedy, combining predictable jokes and situations with a more serious subtext that clouds the action more than it illuminates it.

Essentials about the time, place and story are revealed so slowly and obliquely that the audience must do too much thinking to be carried away laughing. And too much thinking about why an accountant in 2010 would put his faith in an old-fashioned fortune-teller, or why she has such a ready collection of red wigs, doesn't help.

Even one of the funnier lines (when Jeremy, playing hard-to-get as a hard-as-nails macho man, claims his drink is "whiskey -- no ice, no glass") is a throwaway by Minnesota Fats in The Hustler that's been parodied before. Although Laufer does contribute an apt topper: "No straw," Jeremy adds.

But even though their innocent awkwardness is part of the comic effect, there is little apparent connection between the characters and their role-playing. Based on the first preview, the show must be carried by the actors' charm, and the sitcom expectations of the comedy. These actors do their best, as does director Jyl Hewston and scenic director Dan Stockwell in using the wide Redwood Curtain stage. Dianna Thiel provides costumes for quick changes, and the effects (including sound by Jon Turney) are mostly effective. For many theatregoers this probably will be enough for a pleasant summer evening.

Fortune continues at the Redwood Theatre in Eureka (220 First Street, between C and D) on Thursdays, Fridays and Saturdays through July 31 at 8 p.m. with one Sunday matinee on July 25 at 2 p.m. The new Redwood Curtain theatre has only 80 seats, so reservations are recommended.

Coming Up: The inter-generational family comedy Over The River And Through The Woods by Joe DiPietro opens at North Coast Rep in Eureka this Thursday, July 22. Directed by Rae Robison, the cast features Linda and Lou Agliolo, Evan Needham, Laura Rose, David Sims and Brittany Morgan Williams.