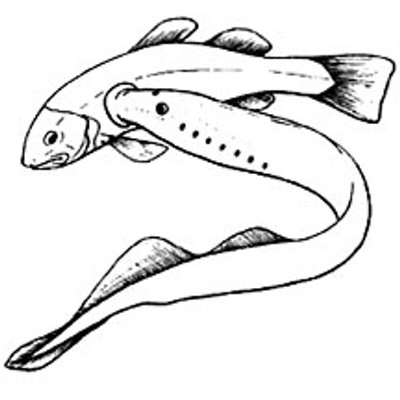 Living fossils" are living species that resemble ancient fossils. In some cases, an organism was thought to be extinct until a modern specimen was discovered. The lobe-finned coelacanth is an example.

Thousands of free copies of a lavishly illustrated book by Harun Yahya have been distributed to many schools in Europe. Their purpose is to refute evolution by highlighting similarities between fossils and existing species. However, fossils cannot preserve much beyond gross structures. Fossils cannot adequately record biochemical evolution. Furthermore, there's no reason why a successful body plan should not persist for millions of years.

Fossils support Darwin chiefly by revealing credible sequences of first appearances spanning vast expanses of time: jaw-less fish, jawed fish, lobe-finned fish, amphibians, reptiles, dinosaurs and then birds. Jaw-less lampreys with skeletons of collagen are exemplary living fossils. Our Eel River is named after these parasites (drawing courtesy of P. Janvier). A 360 million-year-old fossil lookalike is described by Gess and others in the Oct. 26, 2006, edition of Nature (see my sketch of their photo). Among invertebrates, the horseshoe crab provides a good example of a living fossil: A 445 million-year-old lookalike was recently discovered (see Science Daily, Aug. 2, 2008).

Horsetails are widely considered to be living fossils. Cattails, in contrast, are more recently evolved flowering plants. Horsetails resemble plants that were abundant and larger during the Carboniferous, contributing to coal deposits. They produce spores that grow into tiny plants which then produce sperm and eggs. Fertilized eggs develop into the familiar plants shown in the photograph.

Here's a question for you: Are blood-sucking lampreys the persistent products of billions of years of blind evolution or are they the cruel creations of some infinite intelligence?