A redundant Scre4m, Rio's not bad 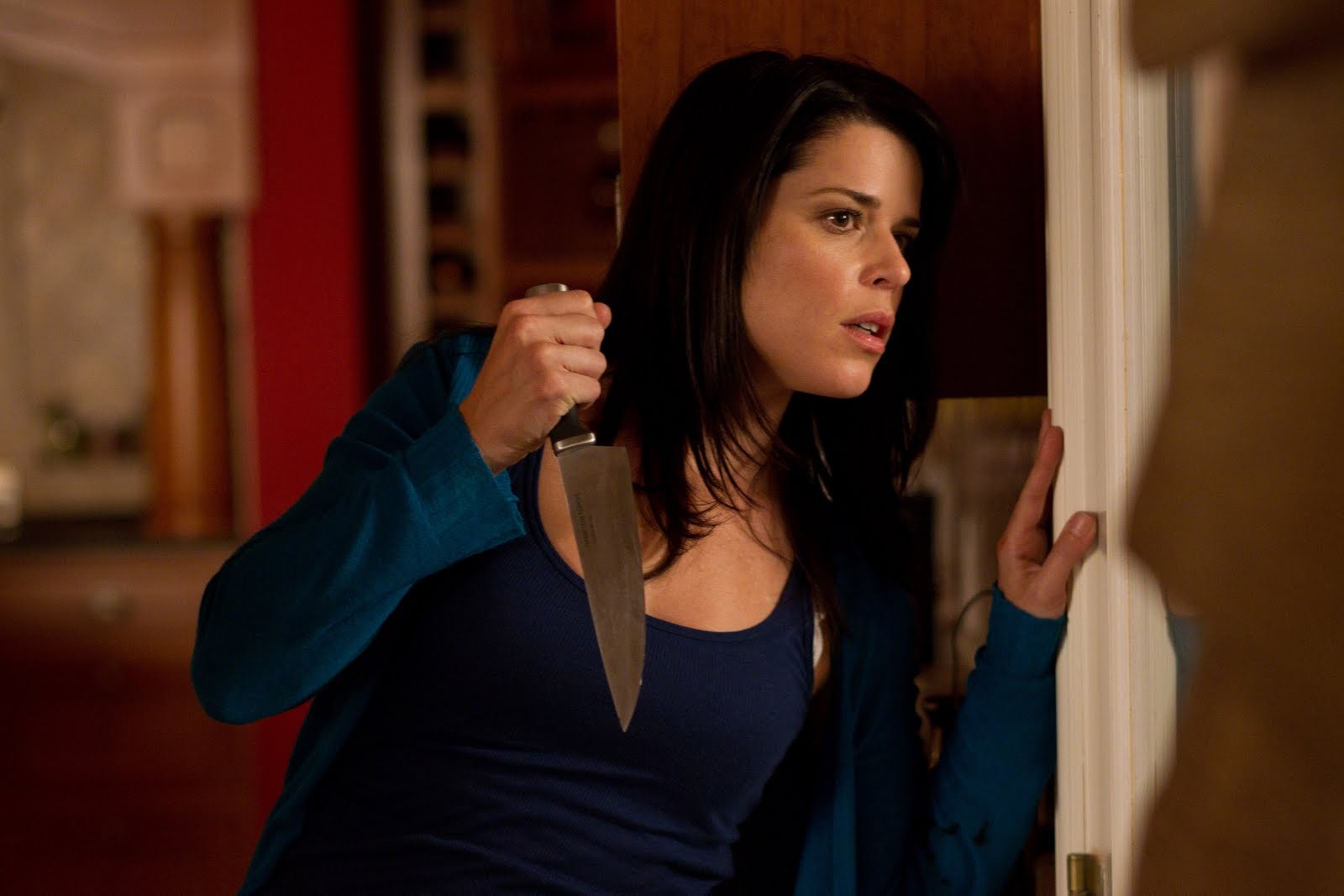 SCRE4M. You might ask, when confronted with another Scream sequel, all these years later, what's left to say? What new, original take on the formula could there possibly be? Is there a motive beyond profit for producing such a movie? You would be right to ask these questions, to which the answers are: nothing, none, and apparently not.

Admittedly, it's kind of a neat trick that Wes Craven et al were able to rope the original principals into a reunion. Neve Campbell, Courtney Cox and David Arquette seem to slip back into their respective roles effortlessly, even though they are by now a generation older than the rest of the would-be murder victims who round out the cast. And, it must be said, the younger players acquit themselves pretty admirably --specially Hayden Panettiere, who steals every scene she's in, nearly walking away with the entire movie in the process.

The filmmaking is effective enough, but it would have been tough to blow it on that front. This looks and sounds like a Scream movie, so done and done. Ghostface is back, wielding the same Buck Knife and popping unexpectedly out at his victims just often enough to keep the audience guessing. And Craven exercises restraint by only including a few truly gruesome bloodbath death scenes. Kudos to all for that.

My main beef with Scre4m is that it's another Scream sequel, and if you've seen one Scream you've seen them all. Sure, each time the plot shifts a little and there's a different, equally inconsequential framing story to contain all the bloodletting. At the end of the day, though, it's always just a matter of waiting for the killings to start, then worrying a little about the welfare of Campbell's Sydney Prescott, then watching the supporting cast get sent to the charnel house, then learning who's picked up the spook mantle this time.

I can forgive the redundancy, and acknowledge that the movie is competently shot and acted, but I can't call the new movie a masterpiece or a return to form -- I don't have strong enough feelings about Craven's oeuvre. At least it's consistent and focused.

My second complaint is in regard to the movie's clumsy, campy post-modernism. Granted, this franchise has been tongue-in-cheek since the beginning, so I'll allow some leeway, but in this case it's too much. The movie opens with multiple false starts, all of which are jokey, self-referential nods to the notion of a jokey, self-referential horror sequel. The impact of the movie is softened by fact that it can't seem to find its own tone, ending up caught between the horror conventions on which it was founded, and mishandled attempts to comment on the new school of American horror.

Ultimately, there probably wasn't a better way for the filmmakers to approach another installment in this series, and there's the rub. Maybe they should have just left well enough alone. 103m. Rated R for strong bloody violence, language and some teen drinking. At the Broadway, the Minor, Mill Creek and the Fortuna.

RIO. While decidedly unlike Scre4m in content and execution, Rio shares with it an air of the unnecessary. It is definitely pretty and likeable and fun, but ultimately it's just another fish-out-of-water/unlikely love story.

Our hero Blu (voiced by Jesse Eisenberg) is an extremely rare blue macaw who, having been separated from his family as a pre-fledgling, never learned to fly. Rarer still, he grew up in rural Minnesota, constant companion to the adorable, bookish Linda (Leslie Mann). One day a bumbling Brazilian ornithologist named Tulio (Rodrigo Santoro) shows up at their doorstep, entreating them to travel back to Rio, where Blu will be introduced to Jewel (Anne Hathaway), apparently the only other blue macaw in captivity. The hope is that sparks will fly and the pair will repopulate their species.  But then some exotic bird thieves get involved, and Jewel, Blu, and comic-relief sidekicks are on the run through the city, with the sinister cockatoo Nigel (Jemaine Clement) in hot pursuit.

You can probably guess how the whole thing turns out, so I won't belabor the point. My only real disappointment is that the movie doesn't do more visually with its setting. There are some lush, gorgeous jungle sequences, and a few panoramic views of the favela, but the city ends up feeling sterile and homogeneous. Even the scenes set at Carnival lack the chaotic energy and vibrant life-force that I would imagine saturate the place.

The voice performances are sturdy and predictable, much like the movie's well-worn plot structure. Clement seems to be having fun, but then the villain always gets the most opportunities to ham it up. Tracy Morgan gets some laughs as a silly, salivating bulldog.

Rio, like most of the animated features I've seen recently, is diminished by the exceedingly high standard set by Pixar. There isn't anything markedly wrong with it, but compared with the consistently excellent movies the other guys are putting out, it lacks emotional depth, visual flair and original storytelling. 96m. Rated G. At the Broadway and the Fortuna (in 3-D) and Mill Creek (2-D).

WATER FOR ELEPHANTS. Sara Gruen's best-selling novel hits the big screen, helmed by Francis Lawrence, a music video director who graduated to I Am Legend. Robert Pattinson (Twilight) stars as Jacob, a veterinary student who ends up working for a circus run by cruel animal trainer August (Christoph Waltz), who is married to the beautiful horse trainer Marlena (Reese Witherspoon). Guess what happens. 97m. Rated PG-13 for moments of intense violence and sexual content. Opening at the Broadway and Mill Creek.

JANE EYRE. Charlotte Brontë's 1847 coming-of-age novel has been adapted for film and television dozens of times. The latest, a BBC/Focus co-production, is directed by Cary Fukunaga, best known for the Sundance award-winner Sin Nombre. It stars Mia Wasikowska (In Treatment, Alice in Tim Burton's Alice in Wonderland) as Jane, with Michael Fassbender (Inglourious Basterds, Hunger) as Edward Fairfax Rochester, master of Thornfield Manor. 121m. Rated PG-13 for some thematic elements including a nude image and brief violent content. Opening at the Minor.

AFRICAN CATS. "True life adventure" from DisneyNature about a family of cheetahs and two lion prides trying to keep it together in the savanna. Samuel L. Jackson narrates; American Idol winner Jordin Sparks contributes a stirring song. The cats are in turn cute and tough; life in the Kenyan savannah is not easy. Rated G. Opening at the Broadway.

TYLER PERRY'S MADEA'S BIG HAPPY FAMILY.  The latest from writer/director/producer Tyler Perry, who you'll notice has included his name in the title, is adapted from his similarly titled play. The sixth in the Madea franchise stars Tyler Perry himself, in drag, as family matriarch Madea, once again applying tough love to help her family through trials and tribulations. 106m. Rated PG-13 for drug content, language and some mature thematic material. Opening at the Broadway.

Tuesday the Native American Arts Gallery at HSU presents a free film screening of Native American director Chris Eyre's EDGE OF AMERICA, based on the true story of culture clash when a black teacher moves to the Three Nations Reservation in Utah to teach high school English and ends up coaching the girls' basketball team. Also showing: a short animated film by Karuk filmmaker Julian Lang.

Elsewhere on Tuesday: the final movie in the Humboldt County Library's April Based On The Book Film Series at the Eureka branch, John Ford's THE SEARCHERS with John Wayne as a Civil War vet searching the West for his kidnapped niece. Wynston Jones serves as host.

HANNA. A young girl is trained by her father as the world's greatest assassin and then travels across Europe kicking ass. Rated PG-13. 111m. At the Broadway, Fortuna, the Minor and Mill Creek.

HOP. The Easter Bunny's son travels to Hollywood in hopes of becoming a famous drummer. No, really. Rated PG. 95m. At the Broadway, Fortuna, Garberville and Mill Creek.

LIMITLESS. If you take revolutionary pharmaceuticals to combat your writer's block, beware the consquences. Rated PG-13. 106m. At the Broadway and Mill Creek.

THE LINCOLN LAWYER. Matthew McConaughey plays a lawyer. He drives a Lincoln. There you go. Rated 119m. At the Broadway.

SOUL SURFER. True story of teen surfer Bethany Hamilton who lost her arm to a shark. Rated PG. 106m. At the Broadway, Mill Creek and Fortuna.

SOURCE CODE. A soldier wakes up in the body of an unknown man and discovers he's on a mission to find the bomber of a Chicago commuter train. Rated PG-13. 94m. At the Broadway and Mill Creek.