It's not alive, but Spike & Mike is 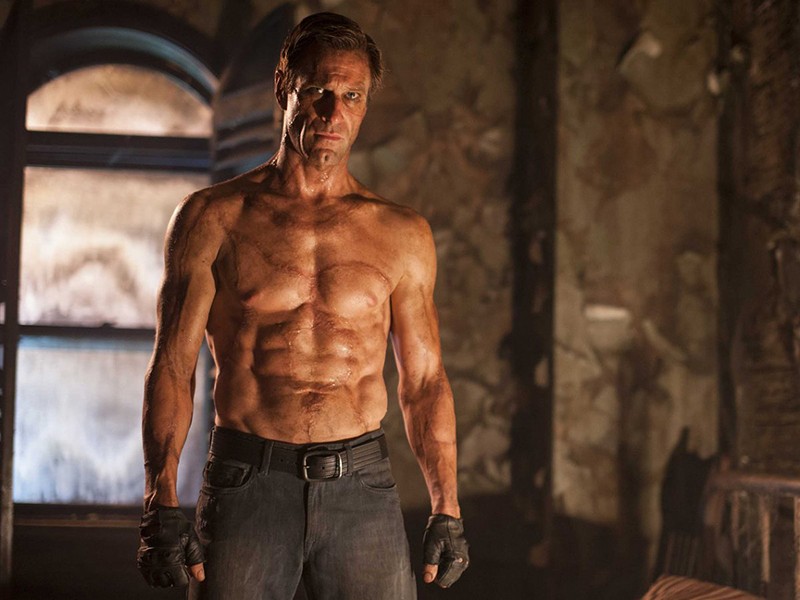 No carbs for the undead (Aaron Eckhart in I, Frankenstein)

I, FRANKENSTEIN. It would be a deliciously nasty irony if this movie were as horrendous, as cobbled together a monstrosity as its famous protagonist. But alas, it isn't even bad enough to be enjoyable. Instead, it's bad in a cold, dully familiar, unremarkable way: the white noise of crappy graphic novel adaptations.

This extrapolation of Shelley's classic puts Frankenstein's creation (Aaron Eckhart) in the middle of a holy war. Shortly after murdering Frankenstein's wife, then outlasting his creator in the frozen wilderness, he's set upon by demons. He manages to disappear a few of them in self-defense, but soon they prove too much for even his formidable combat talents. In swoop a couple of flying gargoyles to his aid. Eventually they give him the lay of the land: The gargoyles are God's hidden army on Earth, defending it against the Devil's horde, who masquerade as humans. After cutely renaming him Adam, the gargoyle leader Leonore (Miranda Otto) attempts to enlist the corpse-man in the cause. He declines the offer, deciding instead to spend 200 years wandering around in the woods, killing demons with sanctified lead pipes when the opportunity arises.

For reasons unknown, now-Adam wanders back to civilization some time in the mid-'90s. The war wages on apace, but now a sinister rich dude (Bill Nighy), who may or may not be a VIP demon, is financing reanimation research for his own nefarious ends. And of course his lead scientist (Yvonne Strahovski) is attractive and terminally naïve in equal measure. Adam gets caught up in the combat all over again, managing to piss off both sides in the process. Humanity remains oblivious to all these supernatural goings on.

There's a lot of pointless claptrap about souls and sacred purpose strung together by mostly forgettable CGI action sequences, and none of the characters rise above sketch dimensions. Nighy seems to get a kick out of playing the baddy, but the fun of his performance gets buried in all the overblown fight scenes and under-written story. He belongs in a movie with a sense of humor to offset the self-seriousness, and this ain't it. PG13. 93m.

SPIKE & MIKE'S ANIMATION FESTIVAL. I've been hearing this name for years, but I never took the time to check it out for myself. Fortunately, I came into possession of a screener copy for this year's fest — set to take place at HSU next week on Feb. 7 — and it served as an almost ideal intellectual palate cleanser.

I'm not an animation aficionado by any means, but I celebrate visual storytelling and independent filmmaking, be it live action or cartoon. Spike & Mike have been fostering a certain brand of indie movie for a couple of decades now, and I can finally say that their festival is worth the price of admission.

There are two sets of movies on offer here: An early, all-ages screening will showcase the "Classics," to be followed by an 18 and over "Sick and Twisted" collection. The former is the stronger group, perhaps not surprisingly, with a refreshing blend of animation types, ranging from '30s style black and white to surprisingly polished, epic-scale CGI, with a few tripped-out exercises in form and iconography to round things out. None of the individual movies run longer than a few minutes, most with little or no dialogue, but they all showcase the inventiveness and unique vision of their creators. I won't highlight any of my favorites, because the element of surprise is a big part of the fun of a festival. But the whole thing is liberally salted with gems. "Sick and Twisted" is a little spotty, veering into semi-gross, wanna-shock territory more often than I would like, but it still holds some delightful moments.

Spike & Mike only pops up in so many town and cities, and we're lucky to have them. Especially looking out over the wasteland of Hollywood's winter offerings, a bright, colorful, challenging collection of original art is a welcome, vivifying thing.

THAT AWKWARD MOMENT. Zac Efron rom-com vehicle about a trio of dudes in relationships. Also Michael B. Jordan probably not getting shot for once. R. 94m.

LABOR DAY. A mother and her son pick up a stranger on the road (as one does) who turns out to be an escaped con. With Kate Winslet and Josh Brolin. PG13. 111m.

12 YEARS A SLAVE. Chiwetel Ejiofor is a free-born American sold into slavery in this crushing period piece based on a true story. With a sinister Michael Fassbender. R. 134m.

AMERICAN HUSTLE. David O. Russell takes a stellar cast, including Bradley Cooper and Amy Adams, back to the '70s for an ambitious and entertaining ABSCAM-inspired caper. R. 138m.

FROZEN. Kristen Bell in some standard Disney Princess fun with a Josh Gad as a slapsticky snowman. Disney-oke showings available for those who need to burst into song. PG. 108m

THE HOBBIT: THE DESOLATION OF SMAUG. Impressive beards and exciting action as Bilbo and the dwarves go after a treasure-hoarding dragon. Director Jackson ups his game with this sequel. PG13. 161m.

THE NUT JOB. An urban squirrel voiced by Will Arnett attempts to rip off a nut store. With Brendan Fraser, Liam Neeson and Katherine Heigl. PG. 86m.

RIDE ALONG. Ice Cube is a scowling cop with plans to terrify his sister's mouthy fiancé Kevin Hart by taking him on patrol. R. 89m.

THE WOLF OF WALL STREET. A raucous cautionary tale of greed, girls and schadenfreude with Leonardo DiCaprio as double-breasted douchebag Jordan Belfort, a self-made '80s stock tycoon who runs afoul of the Feds. R. 180m.