A promising work in progress at the Arcata Playhouse 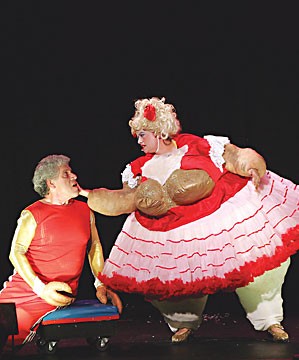 Theatre can be most alive when it is rough and unfinished. Some of the most exciting performances I've witnessed have been staged readings, script-in-hand or living room cold readings. But what I saw and heard last week at the Arcata Playhouse is more than the raw and even intuitive attempt to explore dramatic material — it's the living process of creating a play through collaboration, which can include the audience.

The piece under construction is Crawdaddy: A Freak Tragedy, produced by Dell'Arte, together with Arcata's Four on the Floor Productions and a troupe from Canada that specializes in mask work and puppetry, the Calgary Animated Objects Society, or CAOS. As is often the case here, all these roads lead back to the Dell'Arte Company and school, which many of the participants have in common.

Script and song lyrics are by Toby Mulford, music by Tim Gray; the director is Stephen Buescher, and head designer is Xstine Cook, the founder of CAOS.

Only an insider could accurately describe the nature of the ongoing collaboration, but, as most group efforts do, it results in iterations — successive versions that reflect new creative insights, responses to observations of performances by insiders and audiences, as well as technical improvements. So each performance at this stage is likely to be different.

As might be expected with these particular companies, this production is developing puppetry, costumes, props, sound and lighting effects right along with the script, so there is plenty to see and hear (including singing and instrumental performances). Beginning last Saturday and continuing this Thursday, Friday and Saturday (April 10-12), audiences are formally brought into the process with question-and-answer sessions after the show.

Crawdaddy is about a troupe of sideshow "freaks" that is also a family, with San Francisco Mime Troupe veteran James Griffiths as Crawdaddy (which may be a pun on "claw-daddy," because he's got crab claws for hands, and he becomes the patriarch of the clan); Jacqueline Dandeneau in an immense fat suit as his Fat Lady wife; Zuzka Sabata and Esther Haddad as their Siamese Twin-daughters; Tyler Olsen as the son-in-law Val, and David Ferney speaking through a sinister puppet as The Barker. Jerry Lee Wallace is the Outside Talker (who was literally outside talking up the performance before it started, promising "David Spade live," which is certainly my idea of a freak show).

I caught a dress rehearsal and the opening night performance, and there were changes even in the day between. At least one wasn't planned. Jackie Dandenau, who had been so expressive and animated in rehearsal, had become so physically disoriented by the fat suit that she almost didn't go on for opening night, and her performance was more subdued, especially at first.

The knowledge I brought with me to that rehearsal concerning "freaks" — people with real, exaggerated and fake deformities who made their living as exhibits or performers — was pretty limited. There were still some freak shows attached to traveling carnivals when I was a child, though I never entered one, and in the '70s I did see the 1932 Todd Browning film (Freaks) with actual freak show performers as the actors. In that movie, the "freaks" were the honorable ones, while a couple of "normal" people in the circus were the villains.

Things are not so simple in Crawdaddy. For one thing, there are no "normal" people in it — their presence is felt only as showers of coins and greenbacks. Crawdaddy describes his show in lofty terms, as "extraordinary people doing extraordinary things" and promising "magic and mystery." But also "the transcendent and the twisted."

Early on, Veronica has dreams of creating an excellent troupe, but that creation turns out to involve murders and perhaps other violent acts (the degree to which these are specified appears to be an ongoing experiment), as well as the grotesque exhibits of stillborns, who can still be "useful."

The most unexpected element of this show, and the one that most impressed me at the rehearsal, was the central story of a family. The play begins with Crawdaddy telling about a hard lesson his father taught him as a child. Then the relationship between Crawdaddy and Veronica develops, and leads (after several stillborns) to the twins, who appear to be literally joined at the hip.

I was taken with Veronica's innocence and her powerful maternal feelings, and especially the performances of Sabata and Haddad as the twins, literally quivering with life and energy, two girls becoming young women. The courtship of one of the twins by Val, the somewhat dimwitted young man who sweeps up after the show, provides humor, vitality and then a sexual tension running between innocence and perversity.

Perhaps it was additional makeup and Dandenau's necessary restraint, or maybe just because I was sitting farther from the stage, but on opening night even these scenes seemed darker, less "human," whatever that may mean in this context. And the play certainly gets very dark later.

Without giving more of the story away, this darkness brings to a climax another central theme: the identity and morality of the characters and their world, in relation to the audience. How does the audience define them, even to themselves? In starkly reciting Shakespeare's Sonnet No. 121, Crawdaddy echoes the God of the Old Testament, as well as St. Paul, the poet Wyatt and of course the poet Popeye, in asserting, "I am who I am." Yet he justifies his evil in the eyes of observers: "All men are bad and in their badness reign." But is that reality, or denial and evil itself?

In the end I was struck by how much these "freaks" resemble the freakish gods of the Greeks, especially in their grotesque family relationships. I've just started reading Karen Armstrong's The Great Transformation: The Beginning of Our Religious Traditions, and I was intrigued by her suggestion that the Greek myths of gods who murder, rape and torture each other, present a family model that was more perverse and tragic than any in nearby civilizations, and this may have been a product of the preceding "dark age" — four centuries of chaos and privation.

This in turn focuses something I noted about Crawdaddy. Though the Dell'Arte press release said it takes place in the 1930s, I detected no indication of time or circumstance or any outside world in the production itself. I wonder if that is an avenue yet to be explored. In any case, this piece has extraordinary potential, and it may do extraordinary things.