From Eohippus to Percheron 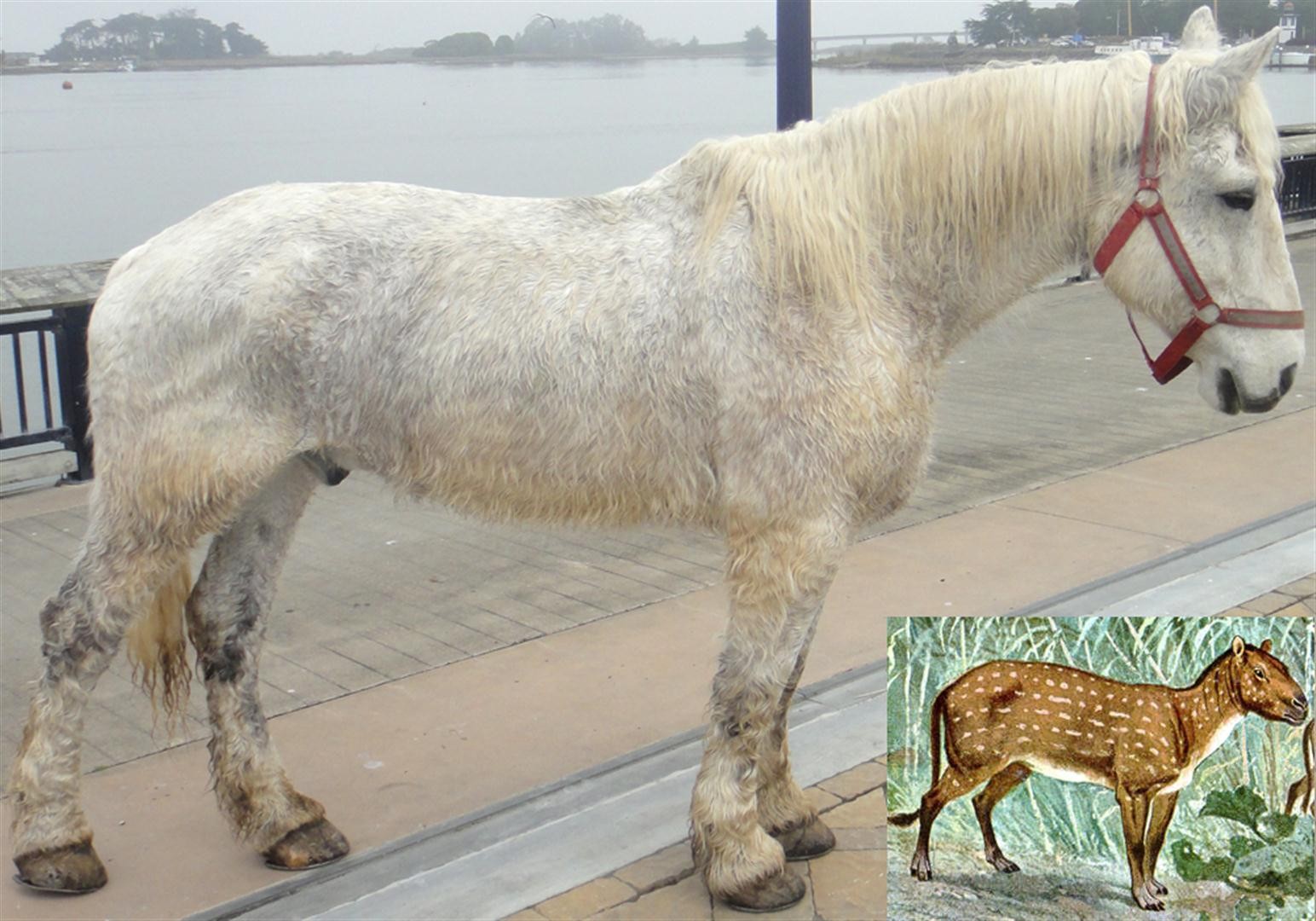 Soon after Charles Darwin published On the Origin of Species in 1859, Thomas Huxley ("Darwin's Bulldog") claimed that an unbroken 52-million-year-long sequence of fossils, cumulating in the modern horse, demonstrated unarguable proof of evolution. Would that it was that easy! Since the discovery of the original succession of proto-horse fossils by American paleontologist Othneil Charles Marsh in Wyoming's Wind River Basin in the 1870s, the number of "equid" fossils has multiplied exponentially. Today, the progression from the earliest proto-horse, Hyracotherium -- popularly called "Eohippus" or "dawn-horse" -- to the modern horse is seen as much more complex and multi-branched than Huxley's 1-2-3 version. The modern horse is one of the few surviving twigs on the messy "bush" of evolution that originated 52 million years ago with Eohippus.

In addition to the great difference in size (see illustration) and weight (Eohippus weighed about 50 pounds, while a modern Percheron draft horse typically weighs in at around 2,000 pounds), modern horses walk differently than their ancestors. A horse walks on what was once the middle toe, while the "splint bones" -- metacarpal remnants of Eohippus' second and fourth toes -- can still be seen as "buttons" a few inches above the fetlock.

As long as the great continent of Beringia connected Asia and the Americas, horses roamed freely between what we now think of the Old and New Worlds. Based on fossil records, the genus Equus (which includes modern horses, zebras and asses) originated in North America about 4 million years ago and spread to Eurasia within a million or so years, with additional to-and-fro migrations that ceased when rising sea levels created the Bering Strait 15,000 years ago.

At the end of the Pleistocene, around 12,000 years ago, horses, mammoths, ground sloths and other large mammals became extinct in North and South America. Because of the synchronicity of two major events (1) a geological cooling period and (2) mankind's expansion into the Americas (both in population and territory), the question of what killed them off is much debated. It may well be that the changing environment and the pressure of human hunting both contributed to extinction. Incidentally, Dakota/Lakota tradition holds that aboriginal horses survived the end of the Ice Age and were always part of the pre-conquest culture.

According to most authorities, horses next appeared on these shores in 1493, transported across the Atlantic by Columbus on his second voyage to "the Indies." Within a few decades, herds of feral horses were roaming the plains, and horses became a part of the cultural history of modern North and South America, yea even unto the farthest reaches of Old Town Eureka.