From Kiln Shed to Skate Park 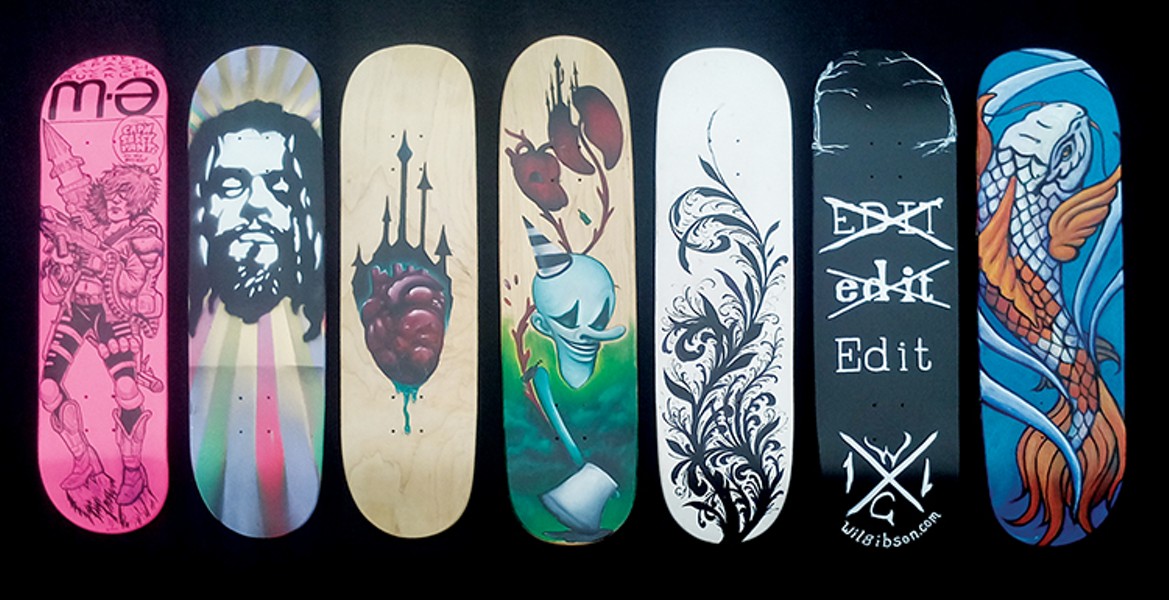 Julia Finkelstein Skate decks on sale for a good cause at Arts Alive! 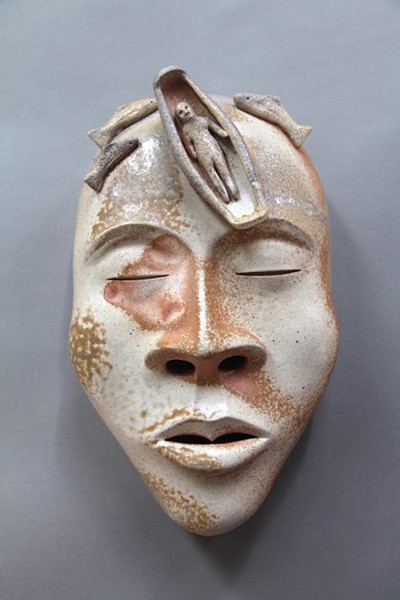 One person throws a pot, one rides a board. Yet the subcultures that have grown up around ceramics and skateboarding center around membership in a group or tribe. This month's Arts Alive! provides two opportunities to contemplate this dynamic. Piante Gallery features work by ceramicist Conrad Calimpong, who has been firing pots in his self-built Ferndale kiln since the 1970s. Meanwhile a skate art fundraiser features skateboard decks painted by local artists on display at seven Old Town venues.

Julia Finkelstein, a skate enthusiast and member of Eureka arts collective Empire Squared from 2000-2011, said profits would support the purchase of skateboards, pads and helmets for local youth. "Skateboarding is important to kids in this area, especially kids who grow up poor," she said, "but I know that there are lots of families that just can't afford to buy skateboards for their kids." She and Brad Hooper, co-owner of Humboldt Skatelab, organized the charity event in response to this need, soliciting exhibition entries from 20 artists with connections to the Humboldt skateboarding community, "most of whom grew up skateboarding." Skateboard artists live complicated lives and at press time the roster of exhibition participants was still in flux, although Finkelstein was able to confirm that several artists from NorCal Tattoo would be part of the event.

Originally conceived in southern California as a thing for surfers to do when the tide went out, skateboarding became an incubator for street style in its own right by the 1970s. Its mainstream popularity peaked in the 1990s, thanks to films like Thrashin' (1986); in 2002, its decadence was reflected in teen-pop singer Avril Lavigne's hit "Sk8r Boi." Soon afterward, the documentaries Dogtown and Z-Boys and Lords of Dogtown packaged skating's underground origins for a mainstream audience.

A skate deck is a conveniently sized piece of street culture that elite culture can feel good about wanting to embrace. It's vital, with kinetic potential rising up from street level — a platform for personal style so free and unselfconscious it speaks to viewers across the class spectrum. Today skate decks come up regularly on fine art auction sites. The nonprofit Skateroom works to bridge the worlds of skateboarding and fine art by holding auctions and commissioning limited edition decks from contemporary artists. Skateboarding brings the elite and the grassroots into conversation, even now — maybe that's why political artists Ai Weiwei and Shepard Fairey made protest skateboards to mark the first 100 days of the Trump administration, with sales proceeds going to selected NGOs.

In his first show at Piante Gallery, Ferndale ceramic artist Conrad Calimpong shows sculptures, pots and sculptures of pot forms fired in his hand-built kiln, which is loosely based on Southeast Asian kiln designs. In his statement, the artist emphasizes the slow and social nature of his firing process: "My kiln firing takes three days, with wood being fed into the kiln every few minutes around the clock. In this time we toss more than three cords of wood into the firebox. The labor-intensive and unpredictable nature of wood firing forces me to slow my pace and consider all aspects of the process."

Calimpong is drawn to the slow, laborious wood firing technique because it allows endless possibilities within a single process. "As the flame moves through the kiln, it touches each piece differently, leaving its mark and ash on the surface. The effects can be controlled somewhat by the way pieces are placed into the kiln and how the firing is controlled, but in the end you can never really control the entire process. This is the attraction for me: having control, but also allowing the process to have a part in the final outcome."

The artist's earth-toned vessels and sake ware display gnarled, characterful surfaces and the unpredictable splatter patterns characteristic of wood firing. The flowing contours of his ceramic sculptures resolve into the shapes of goddesses, owls and halibut. The works in his long-running series In Classical Shape use materials like firebrick, baling wire, driftwood, ceramic shards, paint cans, caulking tubes, cans and plastic bottles to recreate the form of a particular Sung Dynasty Tz'u Chou vase. "We as potters and ceramic artists have had to come to grips with living in a society where the articles that we make are no longer an integral and necessary part of life," Calimpong writes. The sculptures in this series speak to how indelibly the ideals of proportion incarnated in great vessels may impress themselves on viewers' minds, especially now that the sense of necessity originally prompting such vessels' creation has lost much of its urgency.

The exhibition Conrad Calimpong will be on view through July at Piante Gallery, 620 Second St., Eureka. Call 441-1322 or visit www.piantegallery.com. See more of Callimpong's work at www.thekilnshed.net.