From the Ashes of Congress 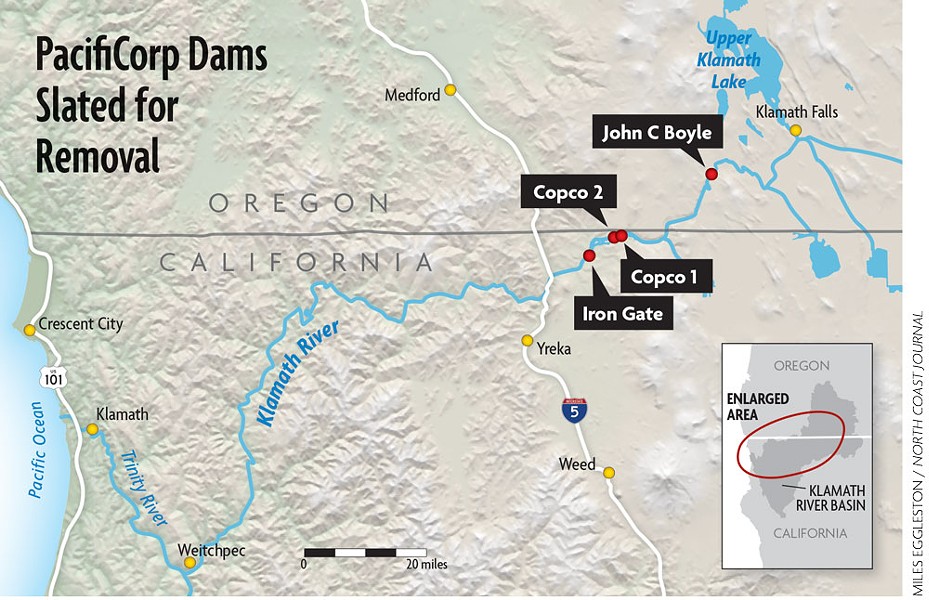 The largest dam removal project in U.S. history appears to be back on track.

According to a joint press release issued Feb. 2, the federal government, the states of Oregon and California and PacifiCorp — the energy company that owns the dams — have reached an agreement in principal to amend the historic Hydroelectric Settlement Agreement (KHSA) and remove the four dams that clog the upper Klamath River in 2020. The plan, as laid out by officials, is to submit the amended agreement to the Federal Energy Regulatory Commission's process on dam decommissioning. If approved, the agreement would see PacifiCorp transfer title of the four Klamath River dams to a third party that would assume liability and take the appropriate steps to remove the dams.

As reported in our cover story "Uncharted Waters" last month, the Klamath Basin Restoration Agreement — the cornerstone of three accords to settle water disputes, remove four hydroelectric dams and restore fish habitats along the 255-mile long Klamath River — expired at the end of 2015, when Congress failed to pass legislation that would have enacted the agreements. The deal's unraveling left stakeholders — some of whom spent years negotiating the agreements — facing an uncertain future.

Meanwhile, PacifiCorp still seemed open to the idea of the dams coming out, knowing they were operating on expired licenses. Relicensing through the Federal Energy Regulatory Commission was going to prove costly, as modern environmental laws would require the company to install fish ladders into the dams, which currently provide just 2 percent of the company's electricity. According to company spokesman Bob Gravely, that's why the company was — and is — open to just taking the dams out entirely. "Dam removal for a lot of people means a lot of things, and for us, we just need an outcome for an expired federal license that's a good outcome for our customers in the eyes of our regulators," Gravely said. "With the protections provided by the Klamath Hydroelectric Settlement Agreement, removing the dams and replacing the power was going to be a better way forward for our customers than relicensing with the new requirements that it would [include]."

PacifiCorp's two primary concerns were the cost of removing the dams and the potential liability associated with pulling them out. The new agreement in principle seems to address both.

The pact signed onto by the company, the feds, Oregon and California states that, if approved by FERC, PacifiCorp would transfer title of the four Klamath River dams to a third-party, which would assume liability and take appropriate steps to decommission and remove the dams in 2020. The removal would be funded with money already allocated and collected through the stalled Klamath agreements, including some $200 million PacifiCorp collected from rate payers in recent years and another $250 million from the water bond California voters approved in 2014. (It's interesting to note that even while the Klamath deals appeared to crumble in late December, California Gov. Jerry Brown still included the $250 million to "meet the state's commitments under the Klamath agreements" in his January budget proposal.)

While the agreement in principle only pertains to the KHSA — the only of the three Klamath pacts to specifically outline a path to dam removal — officials seemed poised to salvage other aspects of the agreements as well, including some measure of water security for Oregon irrigators and ranchers, and river restoration funding. "The states and the U.S. are actively working with all Klamath Basin stakeholders — members of Congress, tribes, farmers and others — on a comprehensive resolution to restore the basin, advance the recovery of its fisheries, uphold trust responsibilities to tribes, and sustain the region's farming and ranching heritage," states a joint press release from the U.S. departments of the Interior and Commerce.

North Coast Congressman Jared Huffman inherited the Klamath agreements from his predecessor, Mike Thompson, and has staunchly supported them, even as he grew frustrated with his Republican colleagues in the House who refused to enact the legislation needed to move them forward. In a press release issued Feb. 2, Huffman intoned that all the work that went into the initial agreements wasn't wasted.

"This agreement is the reflection of all the hard work done by tribal, fishing and environmental communities who have long fought to tear down these dams and bring the Klamath River back to life," he said. "I am committed to working with the people of the Klamath basin, the state and federal governments, and PacifiCorp toward rebuilding the once-famous salmon and steelhead runs of one of the West Coast's most iconic rivers."

The Hoopa Valley Tribe — which has long condemned the Klamath agreements, alleging they didn't guarantee enough water for salmon and took away tribal water and fishing rights — also appears to be in support of the new accord. In the press release from Huffman's office, Tribal Chairman Ryan Jackson said the tribe is pleased to see other parties come around to Hoopa's "long-held view that dam removal should move forward separately from the other basin issues that have created controversy in Congress." While it's debatable which aspect of the deals created the paralyzing controversy in Congress — their price tag and fear of creating a dam removal precedent were both popular culprits — many now agree that a settlement through the FERC process is the most direct path to dam removal, especially now that the initial Klamath agreements have set aside a pot of funding and reams of environmental studies that can serve as the foundation. "The available funding and environmental work creates an opportunity for the administration and the states to dramatically help the river," Jackson said.

Where this agreement leaves other KBRA parties is unclear. Irrigators and ranchers in Oregon have long feared that dam removal without water and power deals in place would leave them with water uncertainty and the prospect of a spike in electrical costs. In the press release from the feds, numerous officials pledged to work with all interested parties in the river system to ensure everyone's cultures and livelihoods stay intact. "We'll continue to work ... on a comprehensive plan," said Kathryn Sullivan, assistant secretary of commerce at NOAA. "Too many people have worked too long to let this ... opportunity to slip away."

While the announced agreement was received warmly in most pro-dam-removal circles, some of the original parties — hardened by both the years of intense negotiations to reach an accord and the years of disappointment and pitfalls that followed — took in the news with a jaundiced eye. In the words of Karuk Tribal Chairman Russell "Buster" Attebery, "The agreement in principle is basically an engagement ring; we won't celebrate until the wedding."