The lives of elephant seals 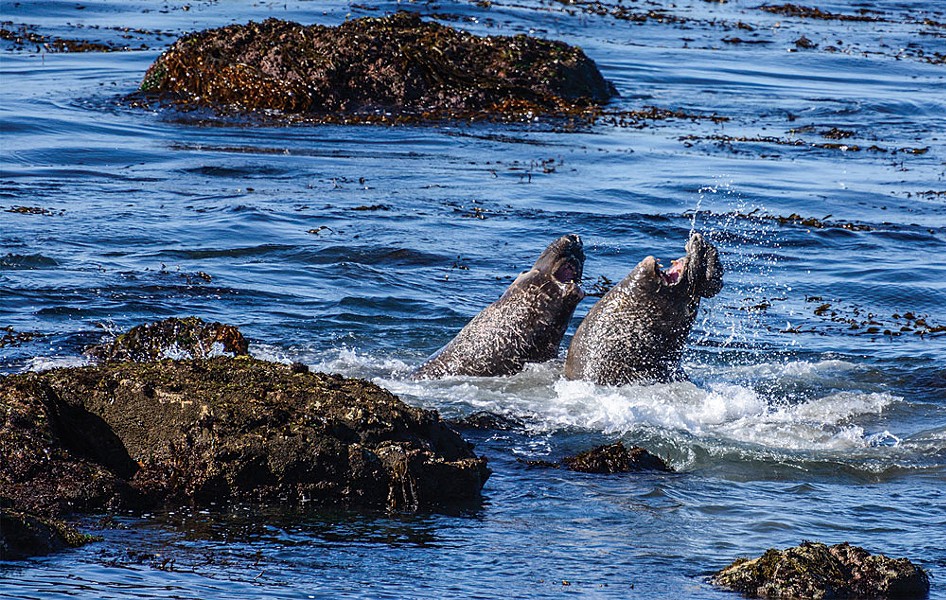 Photo by Mark Larson A throwdown between two males might be physical or all talk and posturing to conserve energy. 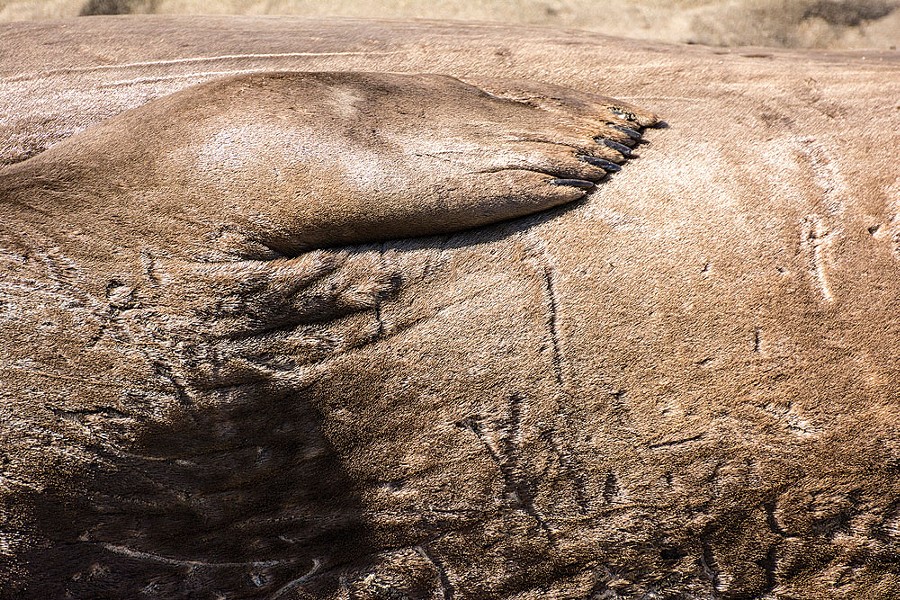 Photo by Mark Larson This close-up of an elephant seal's flipper and belly reveals the hair and scarred skin. Molting elephant seals often come up on local beaches, looking sickly to to the untrained eye. 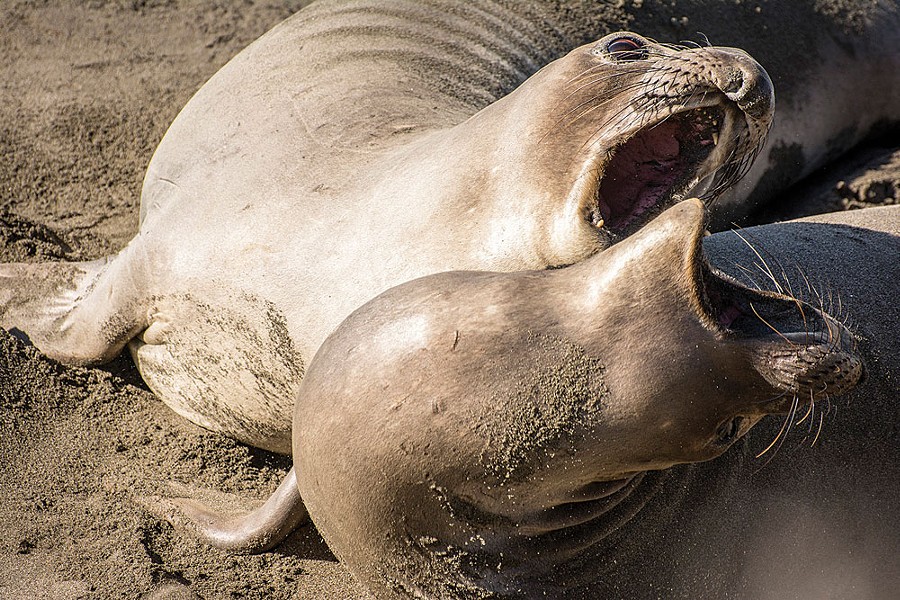 Photo by Mark Larson Juvenile elephant seals spend a lot of time sparring with each other on shore or in the shallow water. 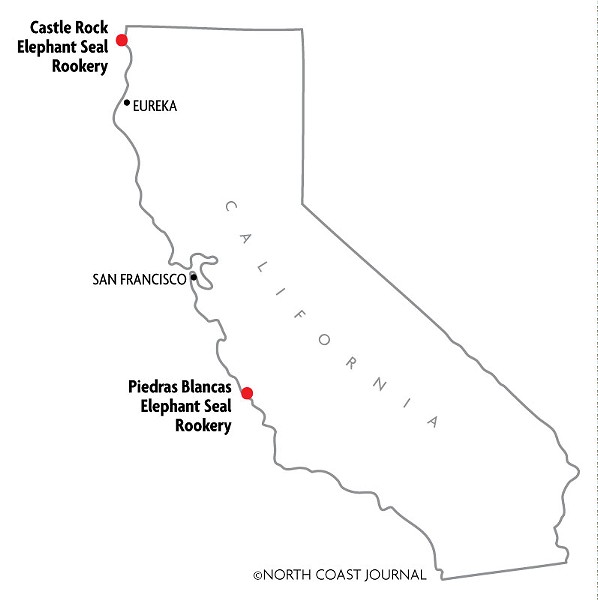 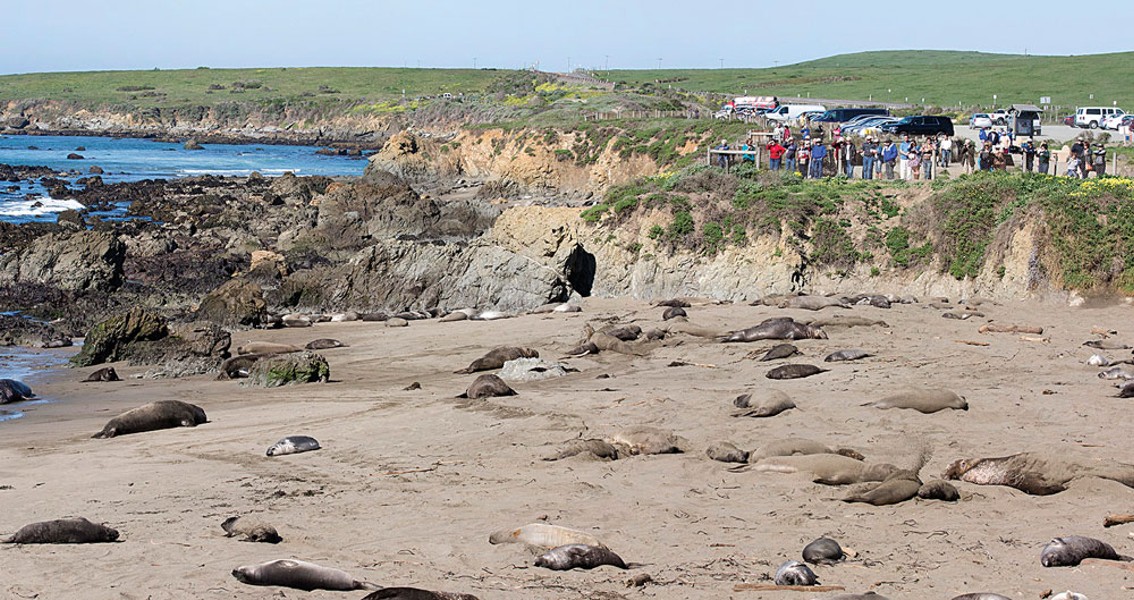 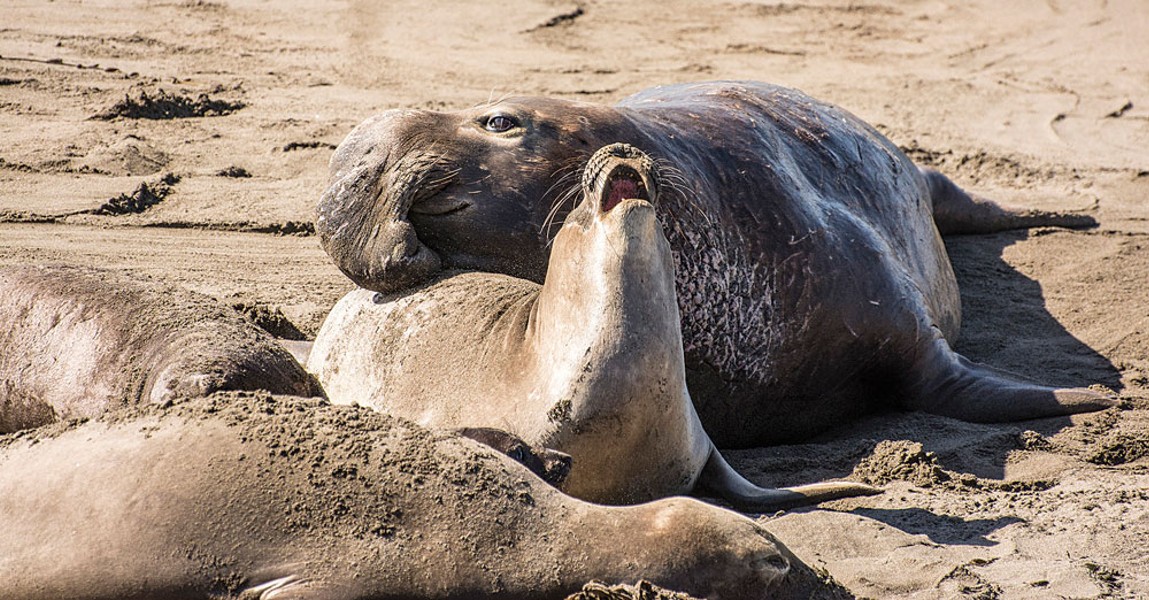 Photo by Mark Larson Adult male seals arrive at the rookery in late November and early December to stake out territory for a harem. 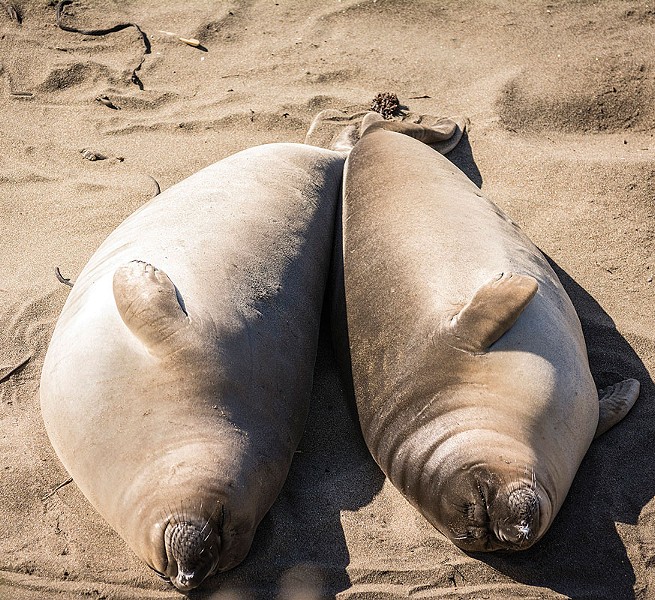 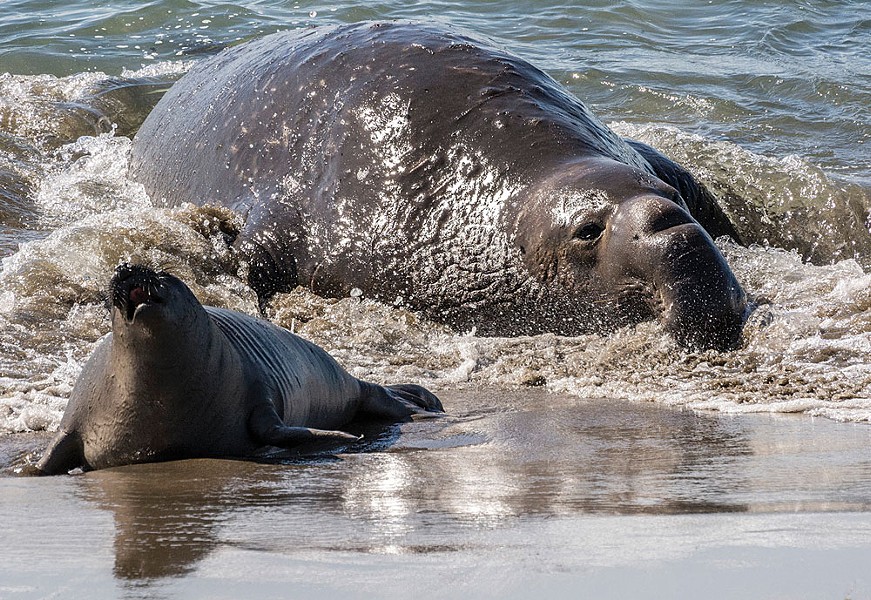 Photo by Mark Larson Elephant seal males, which can grow to 5,000 pounds and 15 feet long, lose around 40 percent of their weight during breeding season. 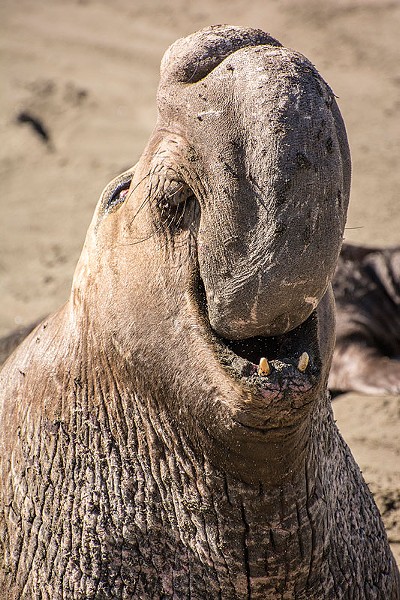 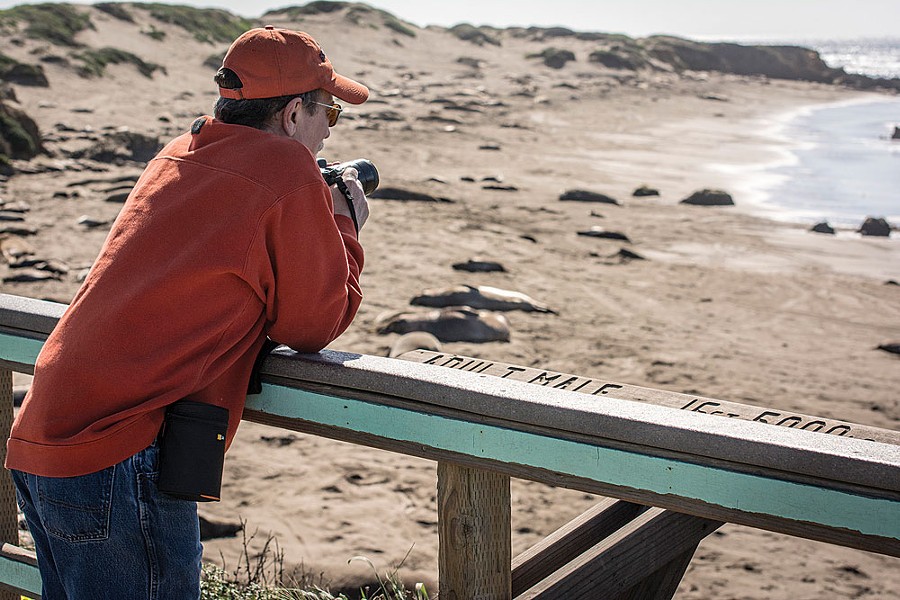 Photo by Mark Larson Hundreds of tourists and photographers stop to observe elephant seals at the Piedras Blancas rookery beaches. 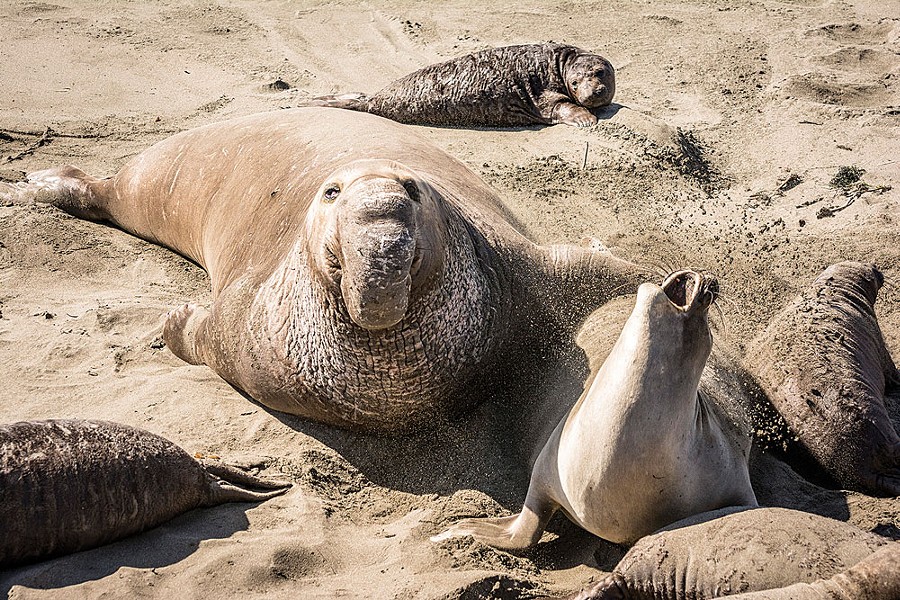 Photo by Mark Larson Elephant seals live on the North Coast and reproduce on Castle Rock off the coast of Crescent City, but the nearest place to see them up close is Piedras Blancas.

Back in the mid-1990s, on a late February drive on U.S. Highway 1 near Big Sur, I saw a strange sight ahead of me. A very large adult elephant seal was crossing the highway to reach the nearby dunes. I pulled over to investigate and when I looked down at the Piedras Blancas beach above the surf line, I was surprised to see at very close range hundreds of adult elephant seals, along with many rotund baby seals who looked like over-inflated footballs.

The elephant seals had been expanding their range north for decades and began arriving at this beach in 1990, with the first pup born in 1992. Once hunted to near extinction (their population was estimated at fewer than 50) in the 18th and 19th centuries for oil from their blubber, the seals received protection from hunting in Mexico and the United States in the early 20th century. Thanks to those regulations, as well as the emergence of kerosene and refined oil, their population has rebounded to around 175,000 today.

In fact, their comeback has been so robust that they are now regular visitors to the North Coast. Professor Dawn Goley, an expert in marine mammals at Humboldt State University, said a young adult male was recently seen at the beach below the Seascape restaurant in Trinidad. She said the unusual number of recent local sightings might be attributed to it being an El Niño year, meaning Pacific waters are warmer than average off the North Coast.

"We do have elephant seals that breed here locally," Goley said, "but they don't play a large role in our local marine ecosystem. When out in a boat offshore here, you will often see them resting at the surface, with their heads sticking up out of the water.

"The only rookery [breeding ground] is at Castle Rock, offshore from Crescent City, and you need a spotting scope or binoculars to see them," Goley said. "Their reproductive rates are not very high or successful at that location, due to the high seas and other factors. As a result, the weaned pups are often found starving on the beaches near Crescent City." Rescued pups are often taken to the Northcoast Marine Mammal Center in Crescent City.

Goley said molting elephant seals also often come up on local beaches in other seasons, looking sickly to onlookers due to the large patches of shedding skin and hair. She cautioned that while elephant seals can appear docile on the beach, they're quite big and can cover long distances in a very short time.

North Coasters have to travel to see them up close and within camera range due to the inaccessibility of the Castle Rock rookery.

On a visit to Piedras Blancas in February, I found the elephant seal rookery beaches lined with fences and boardwalks for the hundreds of tourists and photographers who stop to observe these most unusual-looking marine mammals. The bellowing of the huge adult males fighting or posturing over breeding rights assaulted my ears, along with loud cries from the large number of adult females and hungry seal pups looking to find their mothers and nurse. Sea birds and crows filled the air and patrolled the beach.

On one warm, sunny morning, the elephant seals spent most of the time napping in the sand, occasionally flipping dry sand over themselves. A dominant, or alpha, male could be seen dozing off, but apparently with one eye open for lower ranking males seeking to mate with a harem member in estrus. When that happened, the massive male would move remarkably quickly toward the intruder and all sorts of bellowing and posturing would result. The less-dominant male typically would quickly retreat in front of this onslaught. But occasionally it would lead to the males slamming their long necks and heads into each other and their bodies showed scars from prior battles.

The adult male seals arrive at the rookery in late November and early December to battle over a portion of the beach. The clashes can be physical, with slamming bodies and slashing teeth, but to reduce injuries and avoid wasting energy (they won't eat for the next two months), many simply involve posturing and vocalized threats. The males, which can grow to 5,000 pounds and 15 feet long, lose around 40 percent of their weight during breeding season before returning to the ocean to eat for the next nine months. Only males grow the "elephant" proboscis (its nose), which begins to appear after puberty in year five.

The females, already pregnant, then arrive at the rookery in mid-December to give birth and form the harems. Recent research shows that the females choose the beach location with its dominant male, rather than the males choosing the females. The fertilized egg carried by a female isn't implanted in the uterus (to develop a fetus) until after the female returns to the rookery to molt hair and a layer of skin in May. The females then return to the ocean for seven to eight months in a row before returning to the rookery to give birth.

Elephant seal pups are born in late January or February and weigh around 70 pounds, measuring 3 feet long. The pups and mothers vocalize to form a bond, which is useful when finding one another on a crowded rookery beach. Pups nurse for four weeks on mother's milk rich with fat (it's 12 percent fat at the start and increases to 60 percent at the end), quadrupling the offspring's weight to around 300 pounds. The fasting mother loses twice as much weight as the pup gains. After week four, the mother goes into estrus, mates several times (a dangerous time for the pups, which are prone to being crushed by the huge males) and heads to sea, leaving the weaned pup behind. Typically in March, the "weaners" then begin entering the sheltered rocky tide pools for "play time," building their muscle, swimming and diving skills and endurance, and losing some of their buoyant baby fat. When ready, they head to sea to forage for food and eventually return to the rookery in October and November.

The sub-adult males return to molt in the summer months, followed by the adult males in August and September.

Goley said a recent discovery found the elephant seals' unusual "elephant" proboscis contains resonant chambers that generate low-frequency sounds used for communication. The seals are super-sensitive not only to these low-frequency sounds in the air while on the beach, but also to vibrations in the beach sand — another reason to avoid human or vehicle disturbances.

Research going on at University of California at Santa Cruz had Goley enthused. She said researchers are attaching telemetry devices to the deep-diving seals to collect a wide variety of data via satellites on ocean conditions. Scientists are getting much better insight into oceanographic research variables this way, compared to sending humans out on boats.

"The tagged seals are functioning in kind of an ambassador role as ocean sensors," Goley said, "and giving us insights we've never had before."