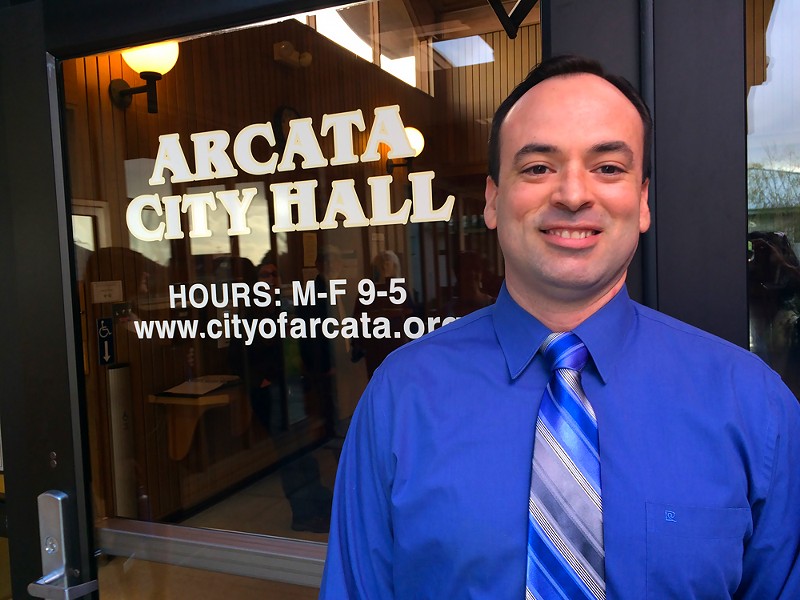 While few details have emerged about misconduct allegations facing former Arcata Mayor and sitting Councilmember Brett Watson, text messages between his fellow councilmembers show a growing frustration about his conduct.

Things spilled into public view when the city called a special Oct. 20 session to discuss selecting a new mayor. Though Watson, who had been arrested for driving under the influence and drug possession in August, had not formally resigned his post, City Manager Karen Diemer said the move was being considered "in communication" with him and for "personal reasons."

Shortly after, Watson announced he was entering a treatment program "to focus on depression and personal issues." He has returned to the council dais but allegations of unspecified wrongdoing remain, and the city recently hired of an outside firm to investigate Watson's possible violations of its anti-discrimination and harassment policy.

While the city has declined to further explain the allegations, which Watson denies, or who's involved, the little information released seems to indicate it involved staff.

Watson did not immediately respond to a request for comment for this story and previously said he wasn't aware of the nature of the claims against him.

The documents also show that Watson's removal from the mayoral role was originally his idea. But, according to the texts, the same day he appears to have broached the subject, councilmembers received apparently shocking news from City Attorney Nancy Diamond regarding Watson.

Just before 8:45 p.m. that day, Watson sent a one-line email to then Vice Mayor Stacy Atkins-Salazar and the city clerk.

"You should put 'selection of a new mayor and vice mayor' on the next agenda if you haven't already," he wrote, adding a smiley emoticon and signing: Brett.

According to Diemer, Watson had already informed her and the city attorney that he "had informally stepped down as mayor as he considered his options."

The next day, Oct. 13, Watson attended a closed session meeting about the allegations and the city's potential exposure to litigation.

While what was said in that closed door session is unclear; texts indicate the four other councilmembers thought the situation was resolved.

"Hey, hope you are OK," Matthews wrote Atkins-Salazar afterward. "This was a rough night."

"I'm just so grateful it's out in the open and that all 4 of us are on the same page," Atkins-Salazar responded. "I think this is going to make us so much stronger as a council."

But the mood of the exchanges would shift over the next 24 hours as Watson indicated he was considering remaining in office. His fellow councilmembers' initial relief seemed to unravel into frustration and anger.

On Oct. 14, Atkins-Salazar wrote to Matthews that Watson told her he would resign and intended to do so at the beginning of the Oct. 20 meeting.

"Huh," Matthews responded. "That's not what he told me."

She then sent Atkins-Salazar a screenshot of a message Watson sent her that day indicating he was rethinking his resignation.

"My therapist says I shouldn't resign," Watson had written. "She says [name redacted] led me on and tried to keep me addicted to [redacted] so [redacted] could control me."

Watson added his attorney said he shouldn't resign, as did two others he reported talking to. Later, Watson texted that his psychologist said "[name redacted] was enjoying the relationship and having me dependent on [redacted]."

Atkins Salazar asked Matthews to forward Watson's message to the city attorney, adding she was "starting to get angry."

"We've been trying to be very gracious and give him an easy way out," she wrote. "But this is not OK."

Matthews agreed, responding that she was "not sure what his endgame is."

Atkins-Salazar wrote she was "done as well."

"And if he's going to be dishonest and continue to manipulate us I'm going to be a lot freer with what I say to the public," Atkins-Salazar wrote, adding she didn't plan to sit in chambers like "nothings going on."

Just after noon the day before the meeting, Atkins-Salazar told Matthews she still hadn't heard from Watson.

"At this point some of it is still up in the air. ... Especially since we haven't received a letter of resignation yet," she wrote. "So I'm thinking we won't 100% know what's going on until we actually get to the meeting."

Matthews responded that Watson texted that he'd checked into a treatment center and she told him to "focus on his demons."

"I doubt we will get anything from him," Matthews wrote.

The two discussed having Diamond check in with each of the councilmembers about what to say if no letter materialized.

"It will be an interesting meeting to say the least," Atkins-Salazar said, finishing with a shrugging emoji.

"Very annoying to be left in the dark like this especially when all we asked for was clarity," Schaefer wrote.

Goldstein responded that she was sending Diamond a statement on the vote of no confidence to review and would be asking the attorney if she could share it with the rest of the council.

"If that is how you all want to move forward then I am comfortable making the motion and reading the statement but I want to make sure it's how we all feel is best to move forward," Goldstein wrote.

Schaefer responded she was "100% comfortable" with that.

The next night, Oct. 20, with no resignation in hand, Atkins-Salazar was selected in a special session to replace Watson as mayor.

Goldstein, who was appointed vice mayor at the same time, then read her statement before moving that the council cast a no-confidence vote. She noted Watson had been informed it would happen.

"We have no legal ability to remove him from the city council. However, I believe we owe it to the people of Arcata to make it clear — we do not align ourselves with the actions of Councilmember Watson," Goldstein read, saying that a week earlier "information came to light regarding alleged behaviors of Councilmember Watson that negatively affected the city and some of its staff members."

"It is our responsibility now, as the council, to protect the well-being of our employees and the ability of our city to run smoothly," she continued.

Two days later, around 7 p.m. Watson responded from his personal email, that he was entering the 30-day residential rehabilitation program.

Watson's choice to use city letterhead — making his statement appear sanctioned by the city — chafed his fellow councilmembers.

"I'm blown away," she added. "Every time I think he can't go farther he does."

Matthews agreed: "Super disrespectful to do it this way, without taking any responsibility."

Three months later, the city announced its hiring of an outside firm to investigate allegations against Watson. According to the agreement with Kramer Workplace Investigations, the city is paying $15,000 for the Danville firm to conduct the inquiry, which must be wrapped up by June 30.

In a Jan. 11 news release on the investigation, the city also stated that under normal circumstances an employee facing similar allegations would be placed on administrative leave or reassigned, but Watson's status as an elected official makes that impractical.

Instead, the release states, "The city council adopted special protocols through which he may interact with city staff to continue performing all of his duties as an elected official while having restricted contact with potential victims and witnesses."

The city declined to provide the Journal with a copy of any complaints filed or to provide a timeline of the allegations made, citing the need to "protect the integrity of the investigation and protect the privacy of the involved individuals."

Watson has previously denied the allegations in a statement, saying he has "not done anything to warrant such an allegation" and fears "these allegations are motivated by my continued efforts to hold city staff accountable with timely answers to my questions on behalf of my constituents."

The Jan. 11 city release notes "no finding has been made as to whether a violation of the city's policy has occurred, and we are committed to due process throughout this investigation. ... Once the investigation is completed, the city will determine what, if any, additional information can be disclosed to the public."