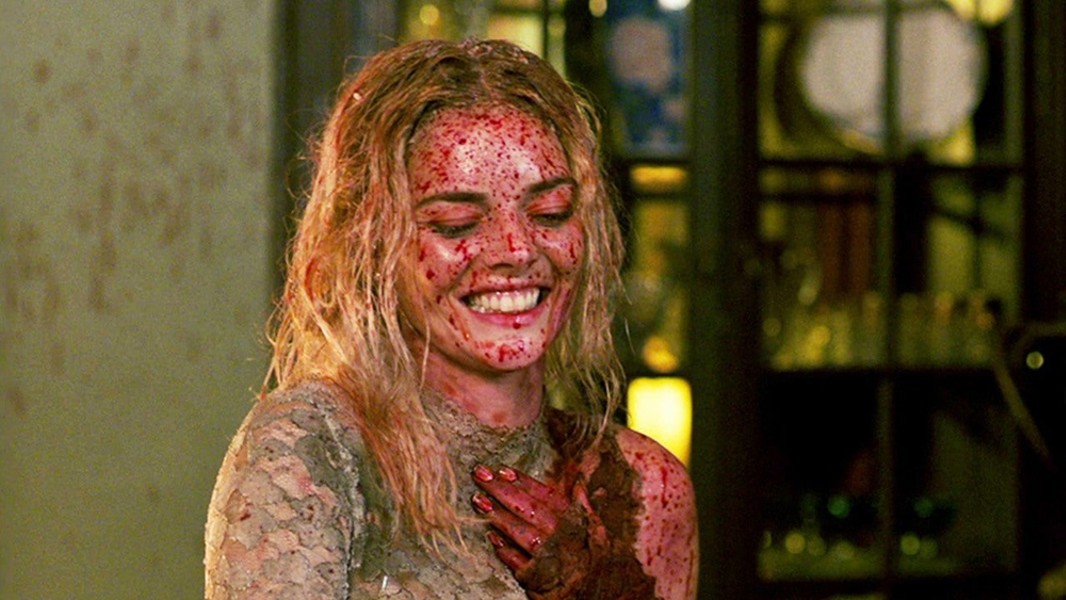 Ready or Not When men tell me to smile.

READY OR NOT. It did not escape me that David Koch, half of the political juggernaut that was the Koch brothers, died the same sunny Friday afternoon this film about the viciousness of an uber-wealthy family opened in Humboldt. The impact of the fictional Le Domas dynasty, built on family-friendly board games, is nothing compared to the legacy of the climate-denying Kochs with which our grandchildren will be shackled. But Ready or Not does give us a cathartic parable about what the worst of the rich and powerful will do — selling their souls despite wringing their hands — to keep what they've got. It's also an entertaining, darkly funny horror-thriller for those of us who don't mind a little blood. Well, a lot of blood.

In the opening flashback, a couple of pajama-clad boys stumble upon a man the rest of their relatives, in black tie and grotesque masks, are hunting down. The elder boy, Daniel, hides his brother Alex in an armoire and gives the man up to the mob. Fast forward 30 years to the same opulent mansion, where bride-to-be Grace (Samara Weaving) is having a pre-ceremony smoke in her Kate Middleton-esqe wedding dress before venturing down to marry Alex (Mark O'Brien) on the lawn of his family's estate. Expecting garden variety in-law drama, she enumerates the awful qualities of the family Alex himself calls "horrible people" but she is still eager to marry. She scoffs when Alex and his cynical, Scotch-brined brother Daniel (Adam Brody) offer one last chance to back out.

Alex's father, Tony (Henry Czerny), questions whether she's "one of us" and there's some epic glaring by old-money-Rumpelstiltskin Aunt Helene (bow down before Nicky Guadagni), but Alex's mother, Becky (Andie MacDowell in a terrifying beehive), offers a warm welcome and advice as a fellow outsider: "Fuck 'em." Once the vows are taken and the house is left to the family, their creepy butler (John Ralston) and a trio of Robert Palmer maids, the literal games begin. It's a Le Domas tradition to retire to a clubroom full of hunting trophies and vintage weaponry (a less gilded version of the décor the elder Trump sons likely aspire to) to play a randomly chosen game at midnight after accepting a new member. When Grace pulls the hide and seek card, the mood shifts; unbeknownst to Grace, it's the only game they play to the death. What Tony only hints at in introducing Grace to the tradition is that the Le Domas family's seafaring progenitor made his fortune in the game industry the old-fashioned way: by pulling himself up by his own bootstraps and making a pact with a demonic entity requiring the occasional blood sacrifice. As Grace totters off to hide, all but Alex arm up like a game of Clue meets The Purge, some with furrowed brows, others licking their chops. (Cheers to whoever winkingly assigned Aunt Helene the battle ax.) Once she gets wise to the true nature of the game, the unarmed Grace has to use her wits to escape the estate. As Daniel reminds her, crystal tumbler in one hand, antique gun in the other, "The rich really are different."

The swearing, lightly tattooed Weaving makes a solid updated final girl with grit, who is gradually transformed by her ordeal. As her gown goes from winter white to bloody and muddy, Grace grunts, screams and grows more feral in reasonable proportion to her circumstances. But her final form recalls Heathers more than your average slasher heroine. How members of the Le Domas clan take to the hunt is fodder for cutting banter and the blackest comedy, between coked up spaz Emilie (Melanie Scrofano) and grim Helene, who calls to mind Cloris Leachman's iconic Frau Blucher as a Troll doll. MacDowell, who at last shows her age here, seems released from the confines of her career-long role as the object of desire and is far more interesting to watch for it. As for the help, well, anyone considering proximity to power as a political strategy in our dark times should pay attention to how that pans out for the staff and every Bond villain's henchman who ever zipped up a jumpsuit.

The directorial pair of Matt Bettinelli-Olpin and Tyler Gillett, who have directed other supernaturally bloody stuff together (V/H/S, 2012; Southbound, 2015), and writers Ryan Murphy (no, not that Ryan Murphy) and Guy Busick have, between them, penned scripts about moneyed excess, werewolves and hot teens pursued by inbred cannibals. Honestly, I would not have looked at the schlocky back catalogue of any of these guys and seen something this sharp and clever coming. Throughout, the pace is quick and the tension is high, with narrow escapes and gory (sometimes humorously abrupt) deaths aplenty. There are Hitchcockian moments of voyeuristic nail biting as characters watch scenes unfold via security and cell phone video feeds, along with dizzying shots of the mansion's sinister staircases and passages. The camera also pays teeth-clenching attention to each new wound Grace collects and one scene definitely gave me tetanus. Whether or not the team behind Ready or Not intended a metaphor for the ossified politics and wealth gap of our times, an indignant Tony shouting that he has done everything right (according to the pact, anyway) hits a nerve and does make one smile at the thought of burning it all down. R. 95M. BROADWAY, FORTUNA, MILL CREEK.

LORD OF THE RINGS: THE FELLOWSHIP OF THE RING. (2001). The even longer extended edition with, I don't know, breaks for fifth breakfast or whatever. R. 218M. BROADWAY.

PEANUT BUTTER FALCON. Shia LaBeouf, Dakota Johnson and Zack Gottsagen star in a drama about a young man with Down syndrome who dreams of becoming a wrestler. PG13. 95M. BROADWAY

THE ART OF RACING IN THE RAIN. Racing as a metaphor for life. As told by a dog. Voiced by Kevin Costner. PG. 109M. BROADWAY.

THE FAREWELL. Lulu Wang's beautiful, understated drama about a Chinese family's decision to lie to their matriarch (Shuzhen Zhao) about her terminal cancer. With excellent performances by Awkwafina, Shuzhen Zhao and Tzi Ma. PG. 98M. MINOR.

FAST & FURIOUS PRESENTS: HOBBS AND SHAW. A Fast and the Furious spin-off with an unlikely alliance. Is it OK for me to root for the bad guy (Idris Elba) in this one? PG13. 134M. BROADWAY.

THE NIGHTINGALE. Writer/director Jennifer Kent's brutal drama about the violent colonization of Australia, following the trials of an Irishwoman prisoner (Aisling Franciosi) and the Aboriginal man (Baykali Ganambarr) who aids her. R. 136M. MINOR.

ONCE UPON A TIME ... IN HOLLYWOOD. Quentin Tarantino's bloody drama about a washed up actor (Leonardo DiCaprio), his stuntman (Brad Pitt) and the murder of Sharon Tate (Margot Robbie). R. 165M. BROADWAY, MINOR.

WHERE'D YOU GO, BERNADETTE? Cate Blanchett stars as an architect-turned-homemaker who runs off to work in Antarctica for her second act. PG13. 130M. MINOR.