But outdoor dining and some masking rules linger 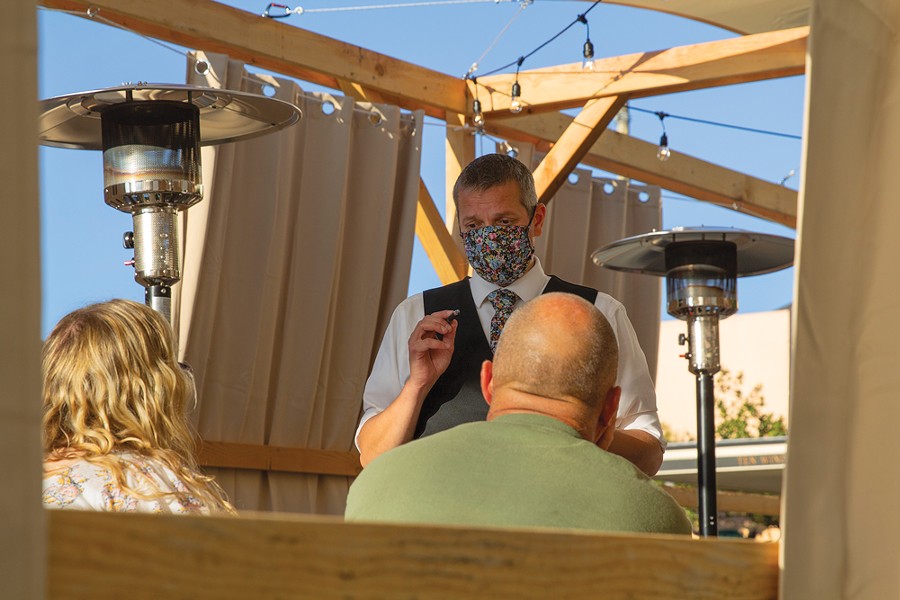 Photo by Thomas Lal The Sea Grill's outdoor dining setup in the adjacent parking lot will likely remain all summer.

Sea Grill owner Holly Blackwood has come to love the wooden structure in the adjacent parking lot — "the pavilion," as she calls it — that has allowed the Eureka restaurant to operate fully and partially outdoors during the pandemic. She says guests have enjoyed it, too. "It's a lot to put up and a lot to take down," between attaching the swaths of canvas that form its walls and setting up the tables and chairs. But while she waits for a planned parklet to be built out front, the restaurant will likely keep using the pavilion through the summer, despite the June 15 rollback of indoor dining restrictions throughout California.

Under the newly revised state guidelines, restaurants are allowed to open at full capacity indoors. Masking, no longer required for fully vaccinated staff or customers, is left up to each private business to decide on and enforce — such as whether to continue to require customers to wear masks when moving about the restaurant or to allow vaccinated guests to skip facial coverings on the honor system. CalOSHA followed up with its own revised workplace rules June 18, allowing fully vaccinated employees to work unmasked indoors. But how different things will really be dining out in Humboldt depends on which restaurant you visit.

Eureka's Director of Public Works Brian Gerving says, "We will continue to facilitate ... restaurants using space for dining." The city will continue to issue permits, which he anticipates will remain without fees, as they have been during the pandemic. According to Gerving, the city is also preparing to install four more parklets and is discussing longer term dining space in alleys.

As for parking lot spaces, like the Sea Grill's, some may remain after the end of the year, depending on how much they're used. "If they aren't going to be used, then we want them to be available for parking," says Gerving, who notes that while it can get crowded at times, generally "there isn't really much of a parking problem." Walking a little farther to a parking space, he says, can be good for creating foot traffic past and into shops, as well. Some pandemic adaptations have been "kind of a silver lining this past year and I think some will continue in the long run because they make the area more vibrant and increase economic activity," says Gerving.

Arcata City Manager Karen Diemer says Arcata will keep offering sidewalk permits, too. "We've been running them in six-month increments but we have every intention to keep offering them through December," she says, noting Gov. Gavin Newsom's executive order has extended the outdoor Alcoholic Beverage Control allowance to serve to-go drinks through the end of the year. "We certainly want to continue to support that as long as restaurants want to serve outdoor dining."

The Jam in Arcata, according to General Manager David Pate, is taking full advantage, holding onto its sidewalk space as long as it's allowed. Inside, it's seating at full capacity and booking DJs and bands. "We're hitting the ground running," he says, though a few more staff are needed to get brunch service going again. Whomp Wednesday returned last week, with some 150 tickets sold for the 230-person capacity venue. "Not bad for the first night after restrictions were lifted."

Pate says he spotted a few masks in the crowd that night. "We're not requiring guests to wear masks," and the same goes for staff. "We have to take it on faith if someone's been vaccinated. ... I've been wearing a mask religiously since March or April of last year and I've had my vaccination, so at this point I feel comfortable." Still, he says, "We're not going to make anybody feel weird or bad if they're comfortable wearing a mask. We just want you to have fun and be safe."

Even though she anticipates a busy summer, Blackwood is taking a slower approach. "We're not going up to full capacity, yet, I don't think ... . We want to wait it out, plus we don't really have the staff." She knows the Sea Grill is hardly alone in struggling to fill positions and train new hires, as job postings online, in newspapers and in restaurant windows demonstrate. The wait-and-see approach extends to masking, too, with staff still wearing them and asking patrons to wear face coverings when not seated and eating and drinking at their tables.

At Fortuna's Taco Loco, owner Lupe Rodriguez isn't ready to jump all the way in yet, either. The restaurant has fewer than half its tables set up for dine-in service and she's keeping some space clear for customers to pick up takeout orders, a system that's worked out during the pandemic.

"We still require masks, I still have my signs up. And some people aren't respecting that," says Rodriguez, who adds that her cousin was infected despite being vaccinated. She and her staff try not to make a big deal when their requests are ignored but, "It makes it hard on businesses. Some of us have little kids who haven't gotten vaccinated. And I have a grandma who's vaccinated but if she gets COVID she's probably gonna get really sick."

She hasn't gotten a chance to sort through the updated CalOSHA guidelines and she's concerned about how to keep a pair of unvaccinated employees safe.

"I honestly don't wanna wear my mask anymore, I'm tired of it," says Rodriguez with a light laugh. Still, she says, "I believe I might still take care of myself. I'll still wear a mask ... just because someone says you don't have to wear a mask doesn't mean COVID is gone. It's still out there."