Was it necessary to water down Mayor Jager's letter to the Wiyot?

Photo by Terrence McNally Tuluwat, on Indian Island, where Wiyot people were massacred 154 years ago.

This is the letter Mayor Frank Jager wrote to the Wiyot Tribe. 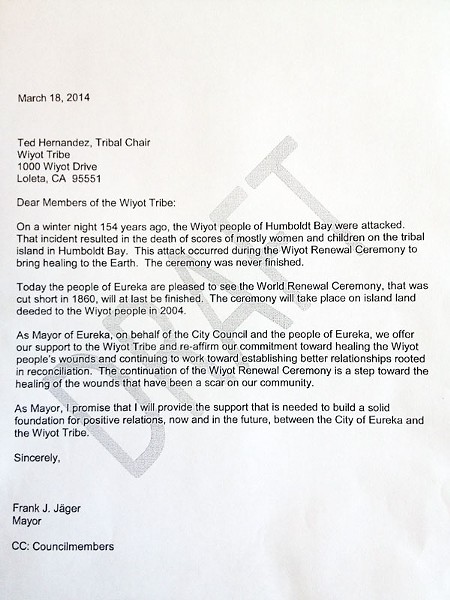 This is the second draft of the letter, crafted by city staff.

This is the third and final draft of the letter, based on the second draft with an error fixed: The Wiyot ceremony will be on land the tribe purchased, not on other land deeded to the tribe by the city.

This weekend, the Wiyot Tribe is holding its first World Renewal Ceremony since the last one, in February 1860, was cut short when white settlers massacred as many as 100 tribe members as they slept on Indian Island. And so the city of Eureka has voted to send the tribe an official letter of ... well, it started out as "apology" for the massacre but later morphed into simply "support" for the tribe after city staff decided an apology might expose the city to lawsuits. Which is nonsense, said Cornell University professor of law and social psychology Jeffrey Rachlinski, who has studied the effects of apologies on legal proceedings.

"Their concern with liability is unfounded," Rachlinski said in an email, adding that the law offers no source of liability for a massacre that occurred so long ago.

Furthermore, he said, taking back an apology can sometimes backfire.

On Monday, March 17, after drafting a letter of apology to the Wiyot Tribe over the weekend, Eureka Mayor Frank Jager had the city clerk send out the draft — noting it would be voted upon at the city council meeting that coming Tuesday night — to the media, who then reported on it. Then, that Tuesday, in the hours before the council meeting, legal eyes latched onto the letter and perceived trouble. A second draft was speedily written in time for the meeting that night and also lobbed off to the media. The changes were dramatic — and the media reported on them.

Some of the language that was eviscerated from the first draft included "citizens of Eureka participated in" and "massacre of unfathomable proportions" and "formal apology" and "nothing we say or do can make up for what occurred on that night of infamy." The second draft, though on its own nice enough, was a somewhat stranded piece of work, afloat in oddly minimalist bureaucratese with no mention of who attacked the Wiyot nor of anyone's being sorry for it. (Both drafts offered the tribe the city's support.)

At the council meeting, Jager said his letter was inspired by the upcoming Wiyot World Renewal Ceremony and the fact that his two young granddaughters are members of the Wiyot Tribe. He said he'd taken them to several of the Wiyot vigils over the years memorializing their murdered ancestors.

During public comment, which occurred before the council compared the merits of the two drafts, praise was plentiful for the mayor's gesture. Bruce Kaye, a substance abuse counselor for Humboldt County and a member of the Navajo Tribe, called the city's "taking responsibility" like this "unprecedented." Several people offered their own personal apologies for the 154-year-old crime. Some of the commenters seemed unaware the word "apology" had been removed from the letter.

After public comment, the council discussed the two letters (the second of which they'd received just before the meeting). Councilmember Mike Newman, saying he had no problem with an apology but feared financial liability, asked city attorney Cyndy Day-Wilson to clarify the danger.

"There's always the potential when you put something in writing that someone's going to take it and use it for purposes you did not intend," Day-Wilson answered. That's why, she added, she and staff rewrote the letter, taking a "different approach."

Councilmember Linda Atkins said she was drawn to the first letter, and later added, "My concern is that, as people, we are unable to take any steps in this world without a concern about liability."

Councilmember Melinda Ciarabellini, who helped Jager draft his first letter, wondered if at least the second draft could be labeled "letter of apology."

Before the council voted unanimously (some members reluctantly) for the apology-less language of the second draft, Ciarabellini said it was appropriate to read that second draft to the public, and she read it aloud.

So how big a deal is this? Perhaps not very, in light of the more momentous occurrence: the revival of the Wiyot Tribe's annual World Renewal Ceremony. And it seemed clear at the council meeting that sincere feelings of regret drove Jager to draft his letter and caused several of the councilmembers to agonize over the changes to it. As councilmember Chet Albin explained his take on the matter, "even if [the second draft] is not the mayor's words, the intent is still to apologize."

But this smudge on an otherwise joyous moment didn't have to happen.

"No matter how tragic the events, or egregious the conduct, no one alive today is a sufficiently close relative that they can recover for the death of a family member killed at the massacre, nor are any witnesses alive who might have directly suffered emotional distress," said Cornell professor Rachlinski. "Furthermore, the apology identifies the wrongdoers as unnamed citizens of Eureka whose liability died with them. The apology also admits no wrongdoing on the part of the City Council (whom they represent and for whom they can speak)."

He said lawsuits brought against corporations for the role they or their predecessors played in the slave trade have been uniformly rejected for similar reasons. Lawsuits by Native American tribes against states and municipalities over treaty rights are common, he added, but those usually concern details of a treaty.

"The research on apologies suggest that once an apology becomes expected, the failure to offer one makes someone seem more culpable than had no apology been considered," he said.

Day-Wilson did not return multiple Journal calls seeking clarification on her specific concerns with the first letter. Mayor Jager also did not return calls. Tribal members, preparing for the ceremony, were unavailable for comment.

On Monday, Jager will present the city's letter to the Wiyot Tribal Council where — the psychology of near-apologies notwithstanding — gracious acceptance is expected.

"I think the feeling is we are going to respond to the letter that is presented to us," said Tom Torma, the tribe's culture director.