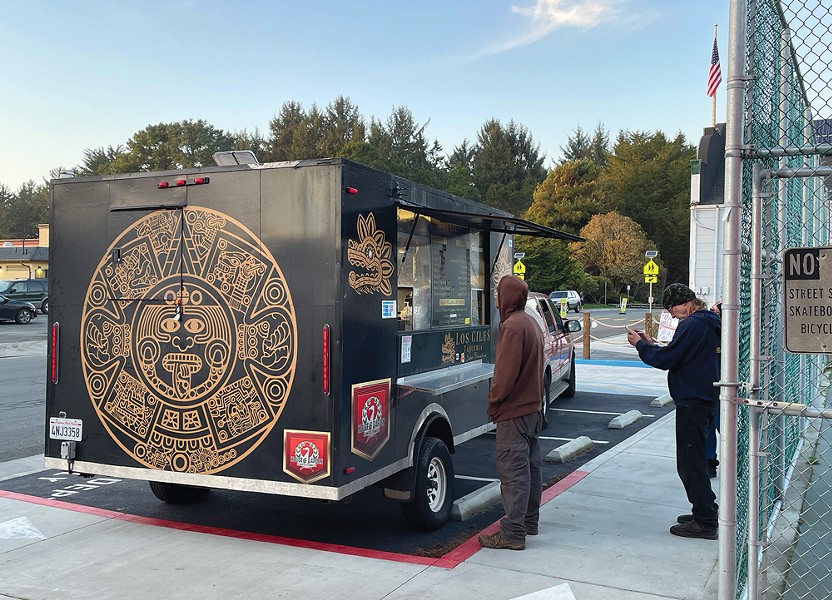 Co-owner Esmerelda Hernandez and the rest of the Los Giles Taqueria truck crew woke at 5 a.m. on Monday, Jan. 9 to start prep for more than 700 meals — around five times their usual day of sales. But this day, the black and gold truck will be posted up at Trinidad Town Hall, cooking burritos, tacos and quesadillas for folks left without power following stormy weather and high winds. "Right now, we're prepared to serve over 700 meals, ... I do have my family going over there to serve but I'm staying behind to cook," she says. The flier for the free meal lists a 1 to 5 p.m. window but, "I'm sure if there's still people who need food, we're gonna be there longer. ... It's definitely gonna be a long day," she adds with a small chuckle.

It's not Los Giles' first time feeding people in need. In the wake of the Dec. 20 quake, its owners and staff turned out hot meals for people in Rio Dell who still didn't have potable water or power. Until the end of December, that effort was sponsored by World Central Kitchen, which sends relief teams and organizers to set up meal distribution in disaster-stricken areas around the world ("Food Trucks and World Central Kitchen to the Rescue," Dec. 29, 2022). But the torch has since been taken up by local organizations Humboldt Area Foundation, Wild Rivers Community Foundation, Humboldt Community Organizations Active in Disaster and Humboldt Made. Now the effort includes Rio Dell and Trinidad, and it's looking to head north to Orick.

Nick Bown-Crawford, executive director of Humboldt Made and a member of the food access group within HCOAD, explains how the Jan. 1 aftershock hit Rio Dell just after World Central Kitchen had left town. He says, "I saw a very significant need to restart the hot meals program because [the aftershock] just double set people back." The World Central Kitchen model, which often includes sending local food trucks with their own power and water sources to areas without working utilities, wasn't new to him, having worked with the international aid organization in the past. In fact, Bown-Crawford says he set up a similar operation mobilizing local food vendors to feed people in need due to the pandemic in Atlanta. "I've done this close to a dozen times before. ... It was just a matter of finding a fiscal partner."

With funding from HAF and WRCF, in a couple days, some of the same food trucks that had been serving meals through Christmas, like Taste of Bim and Manzanilla, were back to feeding 600 to 800 people per day in Rio Dell. As under World Central Kitchen's sponsorship, Bown-Crawford says the vendors receive per-meal payment, and since Rio Dell restaurants are open again, he's able to buy meals from DJ's Burger Bar, Rio Dell Pizza Factory and the Patron Kitchen to be delivered to affected households in Loleta, Redcrest and Ferndale. Some of those meals came with treats from Eureka's Happy Donuts, too.

Trinidad City Manager Eli Naffah explains that within city limits, residents lost power Wednesday and Thursday due to the storm and its severe winds, and then again from Friday to Sunday, spoiling perishables in refrigerators. Naffah says he called Ryan Derby at the Office of Emergency Services to ask what services were available and if there was a way to get hot meals like those being provided in Rio Dell. He says Derby then connected with HAF and Humboldt Made to set it up.

Naffah says city work crews printed fliers and distributed them to neighborhoods without power in the northern unincorporated areas to make sure word got to those hardest hit. Some neighborhoods around Big Lagoon sent a driver down to pick up as many as 40 meals to bring back and distribute. Trucks going north may be racking up a few more miles in the coming days, according to Bown-Crawford, as the operation is moving up the highway to better reach those unincorporated areas and will land in Orick.

The line for burritos and tacos has been busy, says Naffah. "We've had a lot of people coming in from the county area."

"We kind of started learning ever since we were contacted by World Central Kitchen," says Hernandez, "and now we're getting better at it." The pared down, three-item menu still has vegan, vegetarian and gluten-free options, and they've shifted from passing food to volunteers to hand out to making meals to order. "A person might come with one big order for their family," she says, but they're ready. "We're not doing it for the money. We're trying to help."

The Los Giles truck will go south to Rio Dell for a last round of meals on Friday. But if Bown-Crawford or another organizer asks, the team is up for it. "We're just on call right now," says Hernandez, "if they need us, we'll be there."

Jennifer Fumiko Cahill (she/her) is the arts and features editor at the Journal. Reach her at (707) 442-1400, extension 320, or jennifer@northcoastjournal.com. Follow her on Instagram @JFumikoCahill and on Mastodon @jenniferfumikocahill.