Mega-corporations ready the harness for Humboldt's wind and waves 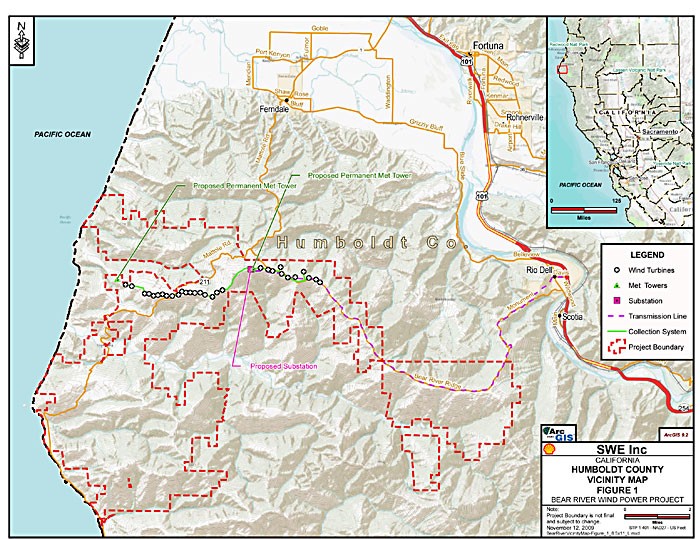 We Humboldtians pride ourselves on being an eco-groovy lot: We've got cars that run on French fry oil. We pedal ourselves to the farmers' market. We wear hemp. But with the possible exceptions of HSU's Behavioral and Social Sciences Building (where rainwater flushes the toilets) and the Arcata Marsh Wastewater Treatment Plant, we have yet to install a satisfying Earth-savior showpiece -- something we can point to and say, "Booya, Copenhagen! Wussup?"

That's about to change. Next week the public will get a first look at two major renewable energy projects proposed for the North Coast -- Shell WindEnergy Inc.'s wind power project, a string of 25 energy-harnessing turbines slated for installation on private property along Bear River Ridge, east of Cape Mendocino, and PG&E's WaveConnect pilot project -- does fusing words somehow reduce carbon emissions? -- which would allow wave energy converters to be tested off our coast. Both companies are soliciting public input early in the development process, hoping to avoid surprise objections down the line.

Along with biomass energy, which is already in operation at plants in Fairhaven and Scotia and will soon be generating power in Blue Lake, wind and waves represent the best renewable energy sources for Humboldt County according to David Boyd, executive director of the Redwood Coast Energy Authority. RCEA has partnered with the Schatz Energy Research Center and PG&E to develop a renewable energy strategic plan for Humboldt County, financed through a $200,000 California Energy Commission grant. Boyd says wind energy in particular has tremendous potential.

"It's perhaps the most mature of the large-scale renewable energies," Boyd said by phone last week. The two main challenges here, he said, are the transmission bottleneck, i.e. getting power from the wind resource site to the main transmission lines, and environmental concerns, particularly the marbled murrelet. Just last week the U.S. Fish and Wildlife Service denied a petition to remove the shorebird from protection under the Endangered Species Act.

Conservationists have long worried about spinning turbine blades acting as revolving birdie guillotines. The 4,900-turbine wind farm on Altamont Pass, east of Oakland, has drawn particular ire, and for good reason: Built in 1981, smack-dab in the middle of a major migratory route, the farm kills nearly 5,000 birds per year, including roughly 70 golden eagles, a federally protected species.

But technological advances have lessened the danger. Modern turbine blades have larger surface areas and therefore spin slower -- like the pedals of a bike in high gear. Also, construction is no longer permitted in migratory pathways. The American Bird Conservancy estimates that wind turbines are responsible for 10,000-40,000 bird deaths per year. By way of contrast, cars kill 60-80 million and power lines kill up to 174 million birds annually. Both the ABC and the Audubon Society have signed off on wind energy, provided appropriate precautions are taken during development.

"I generally think [wind energy projects] are good," said Jim Clark, president-elect of the Redwood Region Audubon Society. "Whether a bird is smashed by a blade or killed from a mosquito bite due to global warming, the result is the same -- a dead bird." Still, Clark cautioned, the local chapter will reserve judgment on the Bear River Ridge project until more data comes in.

Humboldt County Community Development Services will work jointly with the U.S. Fish and Wildlife Service to prepare an environmental impact report/statement. Construction, if approved, will include five miles of new access roads, up to three permanent meteorological towers as well as new and upgraded transmission lines connecting to the PG&E regional system in Rio Dell. Once complete, the turbines could produce up to 50 megawatts of energy, enough to provide power for 7,500 homes, said Shell spokesperson Tanika Vital.

Wave energy, on the other hand, is still in its natal stages. "People say it's where wind energy was 20-25 years ago," said Jim Zoellick, a senior research engineer with the Schatz Energy Research Center and member of a local public advisory group for PG&E's WaveConnect pilot project. "This is really an important project PG&E is doing to take the next step," Zoellick said. Once (or if) permits are approved, PG&E will have just a five-year window to study the effectiveness of wave energy converters (WEC) -- up to four of them, each produced by a separate manufacturer. PG&E will then use the most effective WEC technologies in future wave energy projects.

The draft pilot license issued by the state is limited to five years, Zoellick said, because the technology is unproven. "Part of [the purpose of] this project is to study not only how the devices work ... but also, what are the impacts?" The license stipulates that, should the devices prove detrimental to fisheries, whale migration or any other oceanic system, PG&E will either have to mitigate the problem or remove the equipment from the water. Under the project's current schedule, operation and testing will begin in 2013.

The public meetings for both projects have essentially the same goals: to inform and to get informed. Company and county representatives will share information on the respective projects and also gather feedback from the public, which will help determine the scope of the environmental documents. "Tell us what impact topic areas you would like analyzed," said Humboldt County Senior Planner John Miller. When the draft documents are ready, the public will get another opportunity to comment, Miller said.