Neighbors band together to find creative solutions for problem properties 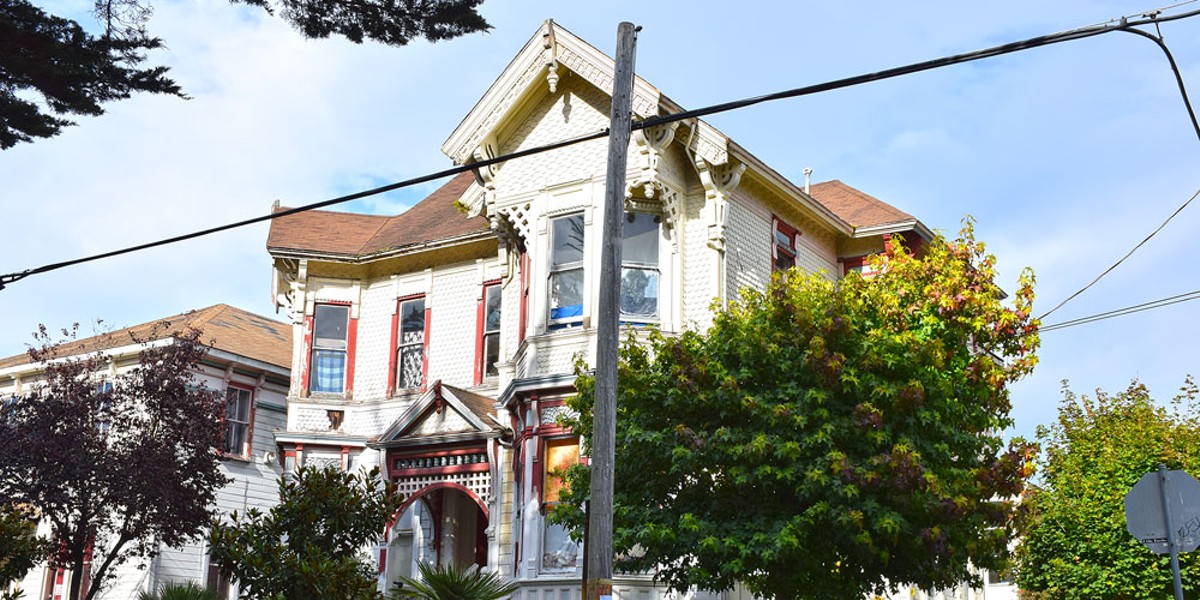 Thadeus Greenson A close-up of the repairs needed at 1625 G St.

Submitted Graffiti in the house.

The Eureka Police Department has visited the old Victorian at 1635 G St., and the neighboring property, at 1625 G St., 60 times in the last six months. The types of calls range from complaints about noise and suspicious people to welfare checks on suicidal residents. The front door of 1635 G St. has been battered and reinforced with plywood. Public works staff have been called repeatedly, both visiting and doing drive-bys on a regular basis.

"There are a ton of broken windows. One of the tenants called me two months ago and asked me to do an inspection because Floyd [Squires] keeps taking his door away," said Matt Morgan, the city's code inspector. "I counted multiple people in the house — upwards of 30 people. There was a girl who was running around naked and on drugs. Other guys were doing heroin in the hallways, or in the rooms smoking it."

Morgan asked the resident how many people living there were actually paying rent. He said about four people. Many unrented apartments and rooms had been boarded off, only to have the plywood torn down and people come in off the street to squat there. Public works sent the property owner, Floyd Squires, a citation notice.

"They're totally trashing the place," said Morgan. "No one wants to go in there."

But several people — the paying tenants of the building — feel they have no other place to go. (Because of their fear of eviction, the tenants declined to speak to the Journal.) Some are in fragile physical or emotional health, and at least one has an eviction record that is preventing him from renting from a different landlord, a familiar story with Squires' tenants. Along with the unsecured front door that allows people to squat in the hallways and empty rooms, the city's code enforcement team has issued citations for inadequate heating and sanitation, hazardous wiring, leaning and buckling wall supports, and a lack of emergency escapes. (A call to Squires' lawyer went unreturned.)

Since these violations were first noted in 2010, some work has been done on the property. But it, along with 26 other Squires properties, is currently in receivership, meaning the landlord's negligence reached the extremes of requiring the intervention of a judge to place the properties in the hands of a third party to take out loans and make needed repairs. But, as noted in the Journal's Sept. 1 cover story, "Suing Squires," Judge Dale Reinholtsen instituted a strange, hybrid system to address Floyd and Betty Squires' properties, allowing the couple to continue to act as landlords and also to oversee any repairs on the sites. The Squireses have drug their feet on pulling permits and requesting inspections, leading to a backlog of work as tenants continue to pay rent on buildings that are falling down around their ears. So while public works continues to cite the landlords for code violations, it has essentially used the last and most drastic weapon in its limited arsenal — receivership — and still failed to win the war.

"We have exhausted every resource," said Brian Issa, the city's code enforcement manager. "When people ask me what they can do, I say, 'Move.'" That's not be being flippant, that's me giving them the best advice we can."

But the tenants cannot, or will not, move. Instead a different, unlikely, army has been mustered to defend them.

On the evening of Nov. 9, close to 30 people squeezed into the community meeting room at the Jefferson Community Center for the initial meeting of the G Street Neighborhood Network. Heidi Benzonelli, co-director of the Westside Community Improvement Association, facilitated the meeting in her customary hearty shout.

"I am your employee," she told the eclectic crowd as they snacked on enchiladas prepared in the Jefferson kitchen. "Tell me what you would like to do and I will work on it."

To begin the meeting, Benzonelli first explained the purpose of a neighborhood network, which is similar in structure to a traditional Neighborhood Watch program, with neighbors looking out for one another and making their presence felt to help deter bad actors.

"The problem is that, if you're only looking at crime, once the crime goes, the organization goes too," she told the Journal. A neighborhood network is intended to focus on a wider, more holistic array of issues. The population of Eureka's Westside also tends to be more transient, with more renters than homeowners. Persistent community engagement and unification could create a set of guiding principles so that when a person joined the neighborhood, there would be standards and expectations in place.

Benzonelli went door to door speaking to Westside residents, asking them what changes they would like to see in the area. She found a perception that the neighborhoods were unsafe. Residents deemed addressing blight and chronic nuisance properties a priority, and among those nuisance properties, the apartments at 17th and G streets drew particular concern. Benzonelli invited the entire neighborhood to get together and brainstorm solutions.

"I'm afraid to take my dogs out at night," said one woman, adding that people staying at 1635 G St. were often loud and erratic, and there were dilapidated cars parked up and down the block.

"I am scared to come home after work," said her neighbor. "I know some of these people and they're fine. But other people are yelling. I don't want to come home at night."

Next to the two older women, two of the tenants spoke up. It was the first time they had met their neighbors. They were not, they explained, inviting people into the building. They were scared too.

"The problem is that squatters have taken over the building," said one man. "We want to be a trusted neighbor, but we need help from the city and county."

Benzonelli encouraged the room to come up with creative solutions. Could one of the tenants act as an interim property manager? Could the neighbors help with the garbage that was overflowing? Has anyone been going to city council meetings? Would it be possible to purchase the building and renovate it? Several people suggested filing a lawsuit, which Benzonelli said she would investigate. But in the meantime, what would make the neighbors and tenants feel safer? The meeting-goers found several points of accord, including a streetlight that had been out of commission for more than a year. Simply restoring some light to the street might abate some crime. Councilmember Kim Bergel, who attended the meeting, promised to take their concerns to the city manager and to investigate fixing the streetlight. Benzonelli also pledged to help tenants and neighbors coordinate with EPD's Problem-Oriented Policing unit, which could document ongoing issues with crime and drugs.

A second meeting to discuss progress has been scheduled for Dec. 1. In the meantime, tenants in the building say there are still issues with theft, with squatters and difficult living conditions. Morgan continues to drive by and check on the building. One small accomplishment? The neighbors now appear to be looking out for — not just looking at — the tenants.

"We got a call last week from a neighbor saying he hadn't seen any movement," said Morgan. "He asked, 'Will you go make sure they're OK?'"

Morgan and the POP team went to check on the tenants. They were, for the time being, doing OK.

Editor's Note: This story has been updated from the original version, which gave an incorrect address. Two properties owned by the Squireses -- 1625 and 1635 G St. -- sit next to each other. 1635 is the address for the Victorian house that has been overrun with squatters. The Journal apologizes for the error.