Gardening in the Snow 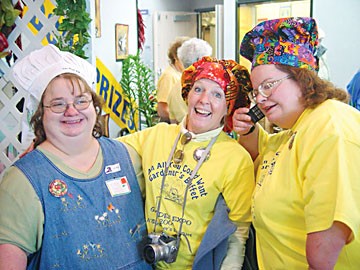 I don't belong to a garden club, and the reason for that is, I'll admit, pretty stupid: I can't stand appointments. The thought of having to add something else to my calendar, of having to be somewhere next Thursday at 7 p.m., just wears on me. So I don't sign up.

But sometimes I get invited to go hang out with another garden club. That happened last week in Spokane, a snowbound city in the American West whose residents, it seems, have an endless enthusiasm for discussing rose propagation or the benefits of perennials over annuals, even while their own gardens lie dormant under a blanket of snow. The Spokane gardeners invited me, so I showed up, even though it required me to actually be somewhere at 7 p.m. on a Thursday. In the snow.

Here's the amazing part about Spokane gardens: They really do just go to sleep under all that snow. My garden is in a perpetual state of sulk, withering away to green mounds and brown sticks in fall, rotting in the winter and rousing itself reluctantly in spring for some kind of halfhearted blooming season that is always hampered by harsh winds and the lack of that liberating, glorious heat that allows most plants to finally stretch out their legs and really show us what they can do.

In Spokane I visited the home of a notorious Martha Stewart-esque gardener who very much wanted to show me her garden, but all she could do was point to the mounds of snow that drifted around her house and ask me to imagine an herbaceous border. A few twiggy rose canes peeked above the snow; some of them, incredibly, sported green leaves. "All that snow insulates them," she said, and I nodded, pretending to have an understanding of chemistry or physics or earth science that would allow me to understand how being packed in ice could keep you warm. "In fact, the more snow we have, the better the garden will be in the summer."

I hate icy weather, but I was glad to get out of the rain and see some real snow. The prospect of cataclysmic climate change worries me all the time, so a good old-fashioned snowstorm is comforting. In fact, while I was in Spokane I dreamed that a giant whirlpool formed in the Pacific Ocean and quickly drained the entire sea away, like water flushing out of a porcelain bowl. Somehow, standing on the shore, watching this horrible event, I knew that it was my fault. I awoke to find myself in room 203 of Spokane's Holiday Inn Express drenched in sweat because I had turned the heater to "high" and fallen asleep while it was running. At home, we don't heat our drafty old house at all at night, both to save money and to save the planet. We sleep in a cold room and the first one up in the morning checks the thermostat and calls upstairs, triumphantly, to report on the temperature in the hallway. Our record low is 45 degrees.

But at the Holiday Inn, where I wasn't paying the heating bill, I surrendered to the siren song of the heater and that liberating, glorious heat that my own plants long for. I let the temperature rise to a decadent 75¬? — so warm that I kicked off my socks and sat on top of the covers, barefoot, if you can imagine such a thing. I paid for my misdeeds with scary eco-nightmares.

So I was really okay with the fact that I had arrived in Spokane during a snowstorm. This was nice, normal, winter weather. People up there expected it. They strapped little rubber cleats onto their shoes and tramped cheerfully across the ice. The woman who brought me to the garden club meeting carried a bottle of de-icer around with her and sprinkled it in front of her as she walked from the car to the community room. She was worried about slipping and re-injuring an already-injured leg, but she wasn't that worried — not enough to miss a meeting of the garden club.

And to my surprise, over 100 people agreed with her. If the snowplow had made it past their house that day, they showed up. All these people drove across the black ice to get together and talk about plants. Amazing. One member staged an impromptu fundraiser by organizing a betting pool around the question of when the last of the snow would melt away from his garden. Club members gamely lined up and put a dollar on March 20 or May 7.

It would melt eventually; they knew that much, and the tough white roots that had been hiding in the dark would rouse themselves and unfurl green leaves and put on another show. The president of the garden club took the podium and called the meeting to order. She announced that the theme of next year's lecture series would be "magic," and I looked out at the snow and wondered if there was ever a year when magic wasn't the theme of the gardening season.