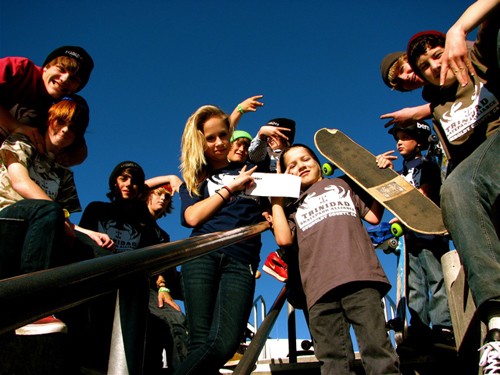 Lately, a growing population of young skateboarders has been doing ollies and grinding rails all over the sleepy, idyllic harbor town of Trinidad, but last Wednesday the skaters showed up somewhere unexpected -- a city council meeting. More than a dozen teens and pre-teens in hoodies and stocking caps filed into the rustic town hall, decks tucked casually under their arms, and slumped into the back row of folding chairs. They were joined by an unusually large crowd of townsfolk, some 60-odd people including parents and seniors, surfers and artists, nearly all there for the skateboarding issue.

Many folks wanted to address the boisterous skate park fundraiser that had taken place the previous Saturday night, prompting a flurry of complaints to the city council. Mayor Kathy Bhardwaj confronted the issue head on. "I've been trying to assemble facts about how it happened," she said. "The first I heard about it was when people called up to say there were fire cannons in the school parking lot."

Yes, fire cannons in the Trinidad Elementary School parking lot: propane combustion guns that shot massive, thundering fireballs into the night sky, scaring unsuspecting neighbors. But let's back up a minute. Why are there so many skaters in Trinidad all of a sudden?

With its gorgeous coastal views and tiny population (just 311, making it one of the smallest incorporated cities in the state), Trinidad has long been a haven for artists and retirees looking for peaceful escape. But in recent years the demographics have begun shifting as families moved in, attracted to the natural beauty, falling home prices and well-regarded public school. Bucking a countywide trend, Trinidad Elementary School has seen enrollment grow by more than 50 percent in four years, rising from 119 students in the '06-'07 school year to 182 today.

Many of these new kids have taken up skateboarding, which, in the time-honored tradition, has irritated some locals who complain that the skaters are dangerous, do damage to public property, litter ... and they don't wear helmets! A 2001 city ordinance prevents skateboarding on two of the only streets in town, and several local business owners, concerned about liability, have put up "no skateboarding" signs, leaving the kids with few legal skating options.

Enter Lisa Espejo, a 38-year-old SoCal native, HSU student and employee of the Murphy's Market in town. Last fall she took a class that required students to come up with a grant proposal, and since she sympathized with the plight of Trinidad's maligned skaters, she decided to write her proposal for a skate park. Soon she was consulting with the kids themselves, meeting them on weekends outside Salty's Surf N Tackle, where they'd sit on crates and discuss their plans. "At first I bought 'em pizzas and root beer," Espejo said. "That died off but they kept showing up."

The group, which came to be known as the Trinidad Skatepark Alliance, enlisted the help of Trinidad City Clerk Gabe Adams, a young adult with compassion for the kids and the know-how to help them. Through his side business, a customized clothing company called Harbor Pride Outfitters, Adams designed a logo for the alliance featuring a crab and a half-pipe. He adhered the logo to hoodies and hats and distributed them to the skaters.

"That sorta sealed the deal for me," Adams said. "I decided I was gonna follow these kids." Together, he and Espejo have raised about $2,000 for the effort, and they've reached out to nonprofits like the Tony Hawk Foundation and potential corporate sponsors including Vans and helmet company Pro-tec. They've also worked with the kids to clean up litter around town, and they arranged for a school presentation about helmet safety from Making Headway, the Eureka-based center for traumatic brain injury recovery.

Skate park initiatives have been tried before in Trinidad, to no avail. Adams said there's simply no city property sufficient for such a park, so success will depend on a partnership with a private property owner. On the plus side, a Trinidad skate park has never had as much enthusiastic public support as it does now. Which brings us back to the fire cannons.

The event in question, held Feb. 5, started as a simple fundraiser arranged by a group of artists and musicians, but as the date approached it grew into an impromptu festival of sorts, with music by Woven Roots and DJ Lobsta, dancing by sambAmore ... and a fire arts performance from the Humboldt Spin Collective in the parking lot across from town hall. By all accounts, their performance was a thing to behold, with acrobats twirling and contorting, hanging by their legs from aerial rigging while the cannons breathed fire to the crowd's delight.

Not everyone approved, however. Over the next few days, Adams was flooded with complaints from irate neighbors who said they'd been traumatized by the noise. A rumor spread that these people were blaming Adams, and maybe trying to get him fired, since he's the one responsible for renting out the town hall, where the event was supposed to be contained. Local resident Tom Sebourn posted on his blog, "URGENT ... the wrath [following the event] has been thrust at our hard-working, beloved City Clerk, Gabe Adams, who had no idea how BIG things were going to get."

Word of the controversy spread quickly, resulting in the best-attended Trinidad City Council meeting in years. When the agenda item arrived, a stern woman approached the podium. "To have something like that go off Saturday night -- we were ill prepared," she said. "Our pets were ill prepared; my mind was ill prepared." Another speaker concurred. "I want to second the objections to the cacophony of noise and reverberations," he said. "Most of us don't live in Trinidad to hear a noise like that on a Saturday night."

Fortunately for Adams -- and the skate park effort -- the crowd turned out to be overwhelmingly supportive. Parents applauded Adams and Espejo for their efforts; they confirmed the need for youth activities in town; and they urged the city council to help however possible. Ultimately, the council decided to form a committee to examine the feasibility of a multi-use public park, including skate park facilities.

Adams and Espejo know that considerable challenges remain, but they're encouraged by the community's response. As the meeting wound down, the skaters quietly stood up, grabbed their boards and walked back outside, smiling and laughing in their matching "Trinidad Skatepark Alliance" hoodies.