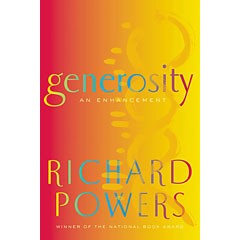 Several reviewers of Richard Powers' last novel (including Margaret Atwood in the New York Times, me in the San Francisco Chronicle) lamented that his recognition in the form of major awards was long overdue. The Gold Bug Variations, Galatea 2.2 and Plowing the Dark were among the deserving, while his 2003 opus The Time of Our Singing had Pulitzer Prize written all through it. Then that 2006 novel, The Echo Maker, did win the National Book Award. So now it's okay to take him seriously.

Powers' M.O. is the literary novelist who writes about science, but he examines business, music, race and other subjects with equal amplitude and alacrity. He interrogates computers or genetics because they are important to the times, for his true subject is the historical moment and its meaning for those living in it.

Generosity involves the genetics of human temperament, in the figure of a young Algerian woman with a troubled history, but who nevertheless seems always and infectiously exuberant. (Powers quotes Kay Redfield Jamison's study of Exuberance, which I also reviewed for the Chronicle -- those were the days.)

After dazzling her repressed professor and her entire evening class in creative writing at a Chicago university, she comes to the attention of the hip host of a TV tech news series, and especially a genetics expert (an apparent cross between tech prophet Ray Kurzweil and genome guru Craig Venter) who wants to isolate and reproduce the gene for happiness.

Like most of his novels, this one involves the collisions of at least two worlds, through defined and textured characters and places. Generosity has a more unified story, a continuous more than contrapuntal narrative, but there are some subtle complications, too, involving the ways we communicate today, and the enterprise of storytelling itself.

Powers' novels typically start with sparks flying -- with the possible exception of our own Jim Dodge, nobody's novels begin with more dazzling virtuosity. Several of his most recent novels ended with a mind-bending and emotional twist. This one starts more deliberately, and ends less exuberantly. In between, he nails our world with challenging, disturbing and almost beatific precision. The characters are alive, which keeps you reading and wondering.

In The Echo Makers there was a background sense of deep environmental crisis. In this novel a few words slip to indicate that the battle is essentially over, and lost. Powers belongs in the company of Pynchon and DeLillo as literary analysts of the Zeitgeist. But the focus here is not on science or the times, but on the people living. With a sweet weariness, a brush-painting economy to the prose, there is a kind of acceptance, a final generosity.