What Antiques Roadshow left out of Seth Kinman's legacy 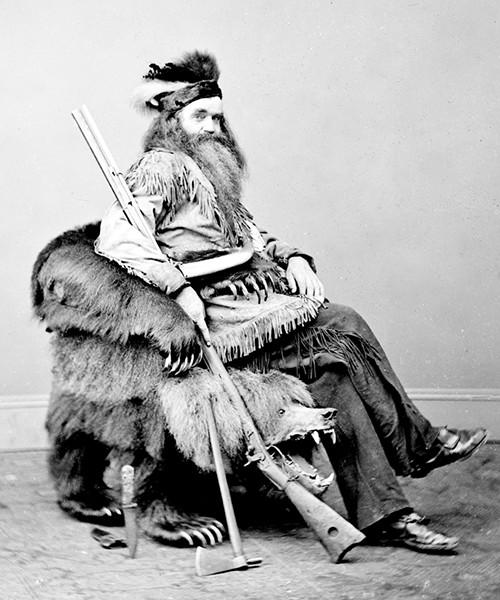 Public Domain The monstrous Seth Kinman in one of his monstrous chairs.

Recently, Antiques Roadshow did an appraisal of a Colt Model 1851 pistol that apparently belonged to early Humboldt County settler Seth Kinman. Spoiler alert: It's supposedly worth $50,000. During the show, the appraiser took the opportunity to wax poetic on the value of the gun because of its known tie to Kinman who is described as a "frontiersman," a "mountain man," a "scout" and as someone who worked "with and against the Native Americans." Cool story, bro.

Sometimes when I go and do lectures about Humboldt County and California Indian history I end up mentioning Seth Kinman. I often describe him like this: "Seth Kinman was an early settler of Humboldt County. He murdered Native people. He also made ugly chairs." Unfortunately, Kinman occupies an almost mythological space in Humboldt history. He fit the part of "early settler" well — the agile frontiersman, avid hunter and long-bearded man of the land came to settle this region that is currently called Humboldt County.

He looked the part. When I talk about Kinman, I usually put up a photo. It's easily found online but I came across it the first time when I was researching in the archives. In the photo, Kinman poses for a still portrait with his son. He is surrounded by his "curiosities" (as they are often called in histories about him). These are the things that made him famous: butt ugly chairs (often made of horns or bones), a lot of dead animal skins and scalps. That's right, scalps. Native American people's hair, which he forcibly removed from their (probably) massacred dead bodies after he (likely) killed them. They are trophies to him, the same way the dead animals are treated as trophies. And we are supposed to celebrate along with him as he poses for us, saying "look at all the things I collected (look at all the things I killed)."

I never show the entire photo. I deliberately cut it off so that it doesn't show the scalps of Native people — Native people who were likely pleading for their lives, the lives of their children, the lives of others trying to escape, who were then killed and stripped of their scalps so Kinman could pose with them while sitting on his fugly chair. There's another photo you can easily find of Kinman, splayed across the floor like some kind of murderous centerfold, where he's also posing with scalps, a tomahawk and his long rifle. His dead eyes are staring just off camera and I imagine somewhere in the room is some photographer's assistant trying not to retch at the hideous chairs scattered about.

One of Kinman's claims to fame is that he gave an ugly chair to Abraham Lincoln. I like picturing Lincoln going, "Wow," all polite, "such an interesting chair." And then getting home and having Mary Todd go, "What is this? No."

Usually when I present this photo I tell people about the first time that I saw it. I was in the archives at Humboldt State University looking at documents discussing the genocide of California Indians and the heinous acts of murder, assault, sexual assault, kidnapping and enslavement of California Indian people. It is well documented, especially in Humboldt County, that the Gold Rush (beginning in 1849) not only brought in thousands of people hoping to find gold, it also included the attempted genocide of California Indian people. This year actually marks the 40th anniversary of "Genocide in Northwestern California: When Our Worlds Cried" by Hupa scholar Jack Norton. Norton set out to prove that the actions of the federal, state and local governments, as well as the everyday citizens of California, amounted to the attempted genocide of Native peoples in California. He was one of the first historians to name what happened to California Indian people as genocide. There is much evidence to support this claim.

Kinman's gun, the Colt Model 1851, was apparently given to him in 1857 by President Buchanan in recognition for giving Buchanan an ugly chair. The gun is engraved with this information. This means that Kinman, returning to Humboldt County with this new weapon, very likely used it as part of his campaign to hunt and kill Native people. Yet, in this short appraisal of this weapon it is described as being owned by a "special guy" who put the "wear and tear" on the gun. They even make sure to point out that the gun was "actually used," which they could surmise because of the modifications made to it to fit Kinman's style of use. The quote that stuck with me the most was this one: "When you know who [the gun] went to there's a reason for all those bangs and bruises."

This is where I always come back to trying to help people understand history, not only from an attempted benign summary of "what happened" but also toward understanding the human cost, response and continued healing that needs to happen. We live in a region where our history is written on the landscape and where people are still being affected by the impact of the destruction of the Gold Rush. During the Gold Rush, settlers poured mercury into our streams and lakes and we still, all of us Humboldt County citizens, have to deal with those repercussions. Our history of a time where people hunted, killed and maimed Native people for sport is not so far away from who we are today. My mother, Lois Risling, often begins her own story with a quote from my great-grandfather David Risling Sr. He said to her, "Remember, Granddaughter, you are alive because some miner was a bad shot." He had very close relatives who lived through the Gold Rush. His uncle, someone he admired and cared for, had been shot several times by settlers during his life. And these were the people that I grew up hearing about.

We are not so far from our "ancestors" who lived through this time, all of us. I think about that as I teach courses in Native American studies. It is very likely that I am teaching the descendants of miners, land speculators, militia men or the everyday citizens of Humboldt County who participated in the massacre and attempted extinction of my peoples. Now their descendants may sit in my class and learn from me about our story of survival, resistance and resurgence. Me, a PhD, professor of Native American studies. Me, who was supposed to be dead according to the "inevitable destiny of the race." Men like Seth Kinman would have thought of me as not worthy or even as less than human. And yet here I am today, teaching and telling our story so that we can move forward as a community.

Recently, Humboldt County demonstrated our capacity for healing that moves beyond apologies and into concrete actions. The city of Eureka voted to return a portion of Tuluwat (Indian Island) to the Wiyot peoples. This was an internationally recognized action, especially considering that Tuluwat was only able to be illegally seized because of an attempted massacre of Wiyot peoples during their world renewal ceremony. Now the Wiyot will restore Tuluwat, especially considering that there is necessary work to be done to restore the island because of how the area has been polluted by previous timber mills and a boat repair shop. The Wiyot Tribe has undertaken the effort of environmental restoration and they are currently asking for donations and help for the cost associated with this type of project. According to the person who brought the gun in for appraisal, he inherited it from his father, who bought it at an estate sale. Now it's likely worth around $50,000. I propose that should the gun be sold the money must be given to the Wiyot peoples for the restoration of Tuluwat. This is the least that anyone who profits off of Kinman's legacy could do.

To learn more about the Tuluwat Restoration Project, visit www.wiyot.us/186/Tuluwat-Project.