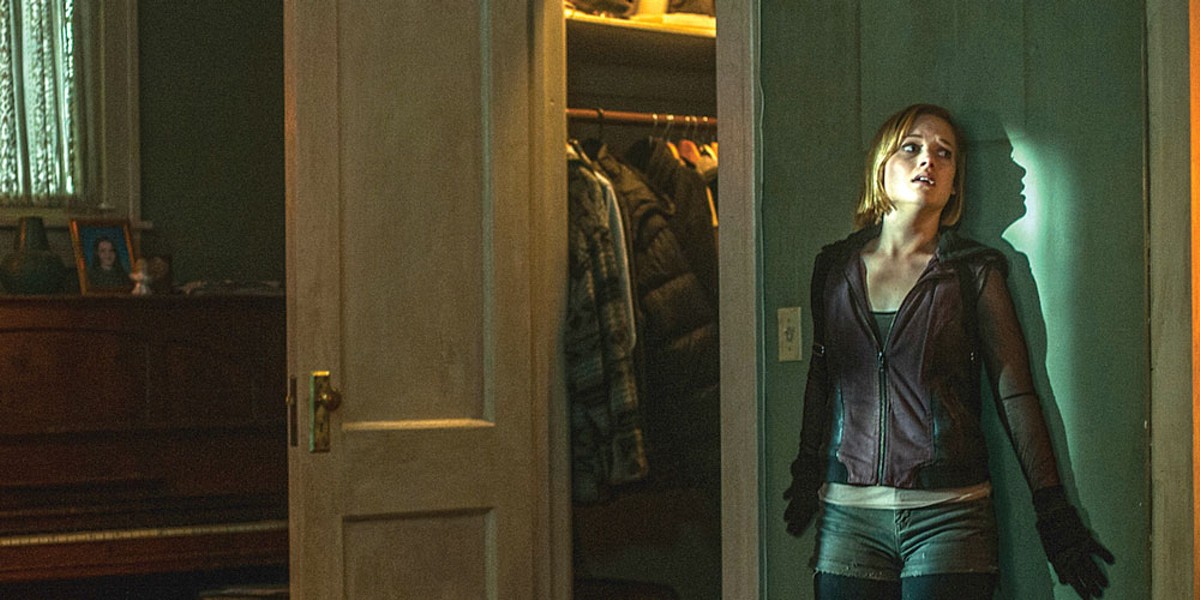 DON'T BREATHE. Director Fede Alvarez weathered the gaze of my red, watery eye when he remade Evil Dead (2013), surpassing my low expectations with skill, imagination and reverence for the source material. I wouldn't have called myself a horror fan then (I've since come to terms), but Alvarez and his talented young cast overcame my resistance to conventions I had unfairly ascribed to most contemporary examples of the genre. Evil Dead did indeed contain cartoonish graphic violence and an incalculable volume of blood. What it helped me realize, though, was that those elements, so frequently mishandled and offered up only to shock, can actually serve a story. Evil Dead's hideousness escalated and elevated the tone of the piece, taking the lo-fi carnage of the original and turning it up to 11 in surround sound. Moreover, it showed how horror movies are a proving ground for writers and directors with genuine talent and a point of view. Because the stakes are low (small budgets, minimal studio scrutiny, a better-than-middling shot at profitability), horror offers freedom to move, challenge and experiment. It's OK to spend a day on an elaborate tracking shot, a crazy lighting design or a complicated stunt when nobody has to pay a movie star's asinine salary. Alvarez impressed me then as one of those talented artists with a point of view. Don't Breathe goes a long way toward proving I was right.

Some (like awards show voters) turn their noses up at "genre" pictures, lumping them based on subject/content rather than on quality or technique. It's critical laziness that's passed over some brilliant cinematic achievements, dismissing them as — what exactly? Too workmanlike? Too accessible? Too focused on storytelling? I've been guilty of it and have overlooked some winners. Don't Breathe is decidedly part of the horror canon but it occupies a different part of the spectrum from Evil Dead or most modern examples.

Rocky (Jane Levy, Evil Dead) feels trapped in a city that is returning to the Earth. Detroit is actively rotting around her. Her dad left years ago and her taunting mom drinks and keeps the company of dudes with Nazi tattoos. Rocky is her little sister's primary caregiver, which provides a glimmer of hope and a sense of urgency: They need to leave. In come Rocky's low-rent, fake-gangster boyfriend Money (Daniel Zovatto) and the tragically enamored Alex (Dylan Minnette). With the unwitting assistance of Alex's security-guard father, the three stage careful burglaries. Alex, the cooler head, takes charge of planning and execution, ensuring that the take never risks serious felony charges. When Money catches wind of an old guy sitting on a stack of cash in a desolate neighborhood, cooler heads do not prevail. Soon the three are breaking into a blind Gulf War veteran's house with him in it — a far more daunting task than expected.

Some moments in Don't Breathe pivot on shock, on things jumping into frame. But these are punctuation marks rather than text; Alvarez cultivates atmosphere and allows the story to breathe and expand within it for a delicious, palpable discomfort that is only heightened when, say, a Rottweiler appears and we jump out of our seats. So yes, this is a genre movie. More to the point, it is a very good movie. It abstains from horrific gore and lazy tricks, using original, intentional techniques, visual and narrative, in their place. And in so doing, it puts most modern movies, much less horror movies, to shame. R. 88m. BROADWAY, MILL CREEK.

MECHANIC: RESURRECTION. Jason Statham used to be my favorite action star, with his heavy hands, weird charisma and equal facility with jokes and more conventional weapons. It was all too good to be true because, lately, he only appears in nonsensical stuff like this.

Arthur Bishop (Statham) is ostensibly retired (following the events of The Mechanic, a circa 2011 remake that was saved by the proficient direction of Simon West and considerable screen presence of Ben Foster). But his nemesis Crain (Sam Hazeldine) effortlessly tracks him to his secret Thailand hiding spot (how's not important, apparently), plants a damsel in distress (Jessica Alba) and gets the two to fall in love (instantly! Kismet is real!). At which point Bishop is willing to kill everybody remorselessly. He's tasked with assassinating three international criminals (including Tommy Lee Jones, who probably got a sweet vacation out of the deal) who, we learn in the least surprising surprise maybe ever, represent Crain's main competition in the international arms trade. It's even stupider than my synopsis, and every line is laden with ridiculous exposition.

I hoped for a big, stupid, fun action movie. All I got was stupid. R. 99m. BROADWAY.

THE LIGHT BETWEEN OCEANS. Drama about a WWI veteran and his wife (Michael Fassbender, Alicia Vikander) who keep a foundling instead of reporting it. PG13. 133m. BROADWAY.