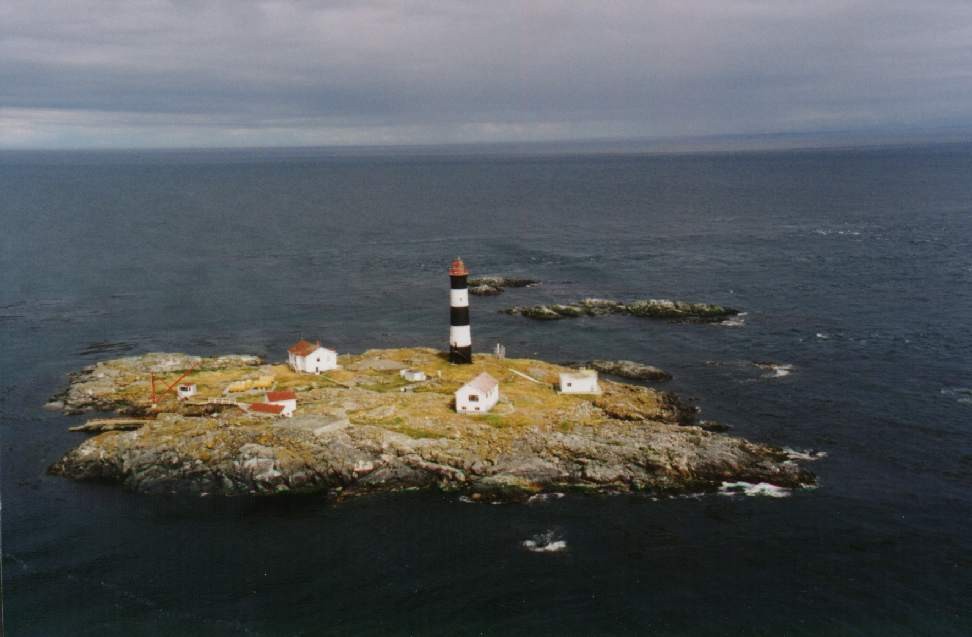 Ready for your holiday geography quiz? Cover the bottom of this column, and we're off:

1. What's the closest foreign land? To avoid Eureka-Arcata favoritism, we'll measure from ACV, a.k.a. McKinleyville airport. How far away is it, to the nearest 100 miles?

2. How about the second- and third-closest foreign countries to ACV?

4. If (when?) the Greenland ice cap and the West Antarctic ice sheet are both completely melted, raising the sea level by 40 feet, would CR be under water? Would Myers Flat still be Where It's At?

5. Is Humboldt County wider (east-west) than it is long (north-south)? How many counties does Humboldt border?

1. Canada is the closest foreign land, eh? (not counting embassies in San Francisco!). Race Rocks (photo) off the southern shore of Vancouver Island, British Columbia are 506 miles north of us, closer than LA.

2. Second is Mexico. La playa at the border, near Tijuana, is just under 700 miles wouth. Russia comes in third. The closest Russian territory is Big Diomede Island (see "Field Notes," April 8), about 2,440 miles north by northwest -- equidistant with, e.g., Jacksonville Fla., and roughly 100 miles short of the next country, Guatemala.

4. CR's parking lot would be submerged, but the campus would be prime waterfront property. Myers Flat is safe; it's between 150 and 200 feet above present sea level.

5. Humboldt County, all 4,000 square miles of it, is about twice as long as it is wide. We border four other counties: Del Norte, Siskiyou, Trinity and Mendocino.

Barry Evans (barryevans9@yahoo.com) defines "winning" as having visited more countries than your age in years. Check out his books at Eureka Books and his travel photos at Old Town Coffee & Chocolates.