Geraldine Goldberg Can Do Anything (2017 Staff Pick) 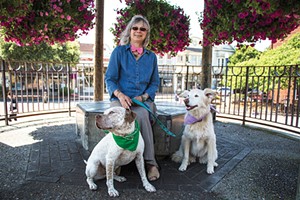 Geraldine Goldberg arrived in Humboldt County on the back of a motorcycle in 1981, soaked to the skin after traveling down from Portland in the midst of a February rainstorm. She fell in love with the place immediately.

"I was ready for an adventure," she says. She found one.

Goldberg and her partner moved into the woods near Whitethorn, a tiny town in Southern Humboldt where everyone hung out under a giant tree. There were no phones. Messages were left at the little store. It was a lot of fun. And there was a lot of drama. Guns were waved, hard drugs floated through the community and pot deals occasionally went wrong. Goldberg says she "didn't know enough to be scared." But then she got pregnant. The couple planned to buy a pistol on the day her water broke. It would be a few more hours before she went into labor and, by that time, it would be the middle of the night. Because her partner couldn't drive their truck (only a motorcycle), Goldberg drove herself to the hospital in Garberville while in labor. Their son Harry was born 10 minutes after she walked into the emergency room. He came home in a cardboard box.

When Harry was 2, the couple split up and Goldberg found work in Arcata. She moved in with another single mom in an apartment on 12th Street. School was cheap in the 1980s, so she enrolled at Humboldt State University, earning a bachelor's in social work at age 40. Being an older student was "exhilarating," she says. She went to work for KHSU, eventually writing a history of the station.

Between working, single-handedly raising her son and beating breast cancer three times, she earned her masters degree in sociology at the age of 50. Her thesis subject was Julia "Butterfly" Hill, whom she visited often during her 738-day sit-in of a redwood tree on Pacific Lumber Co. land. Goldberg still has fragments of the tree's bark in a necklace that she wears daily. She says the thesis has been checked out of the library dozens of times.

Now retired, Goldberg still volunteers at KHSU. She also launched the Arcata Plaza beautification project, helping plant the thousands of flowers that now decorate that space. She was once in charge of removing the garbage and ripped up petals after weekend bacchanals.

"There's a heartbreak of gardening in a public space," she says. "You have to take the heartbreak."

There's beauty sown in with the heartbreak. Geraldine Goldberg persists.