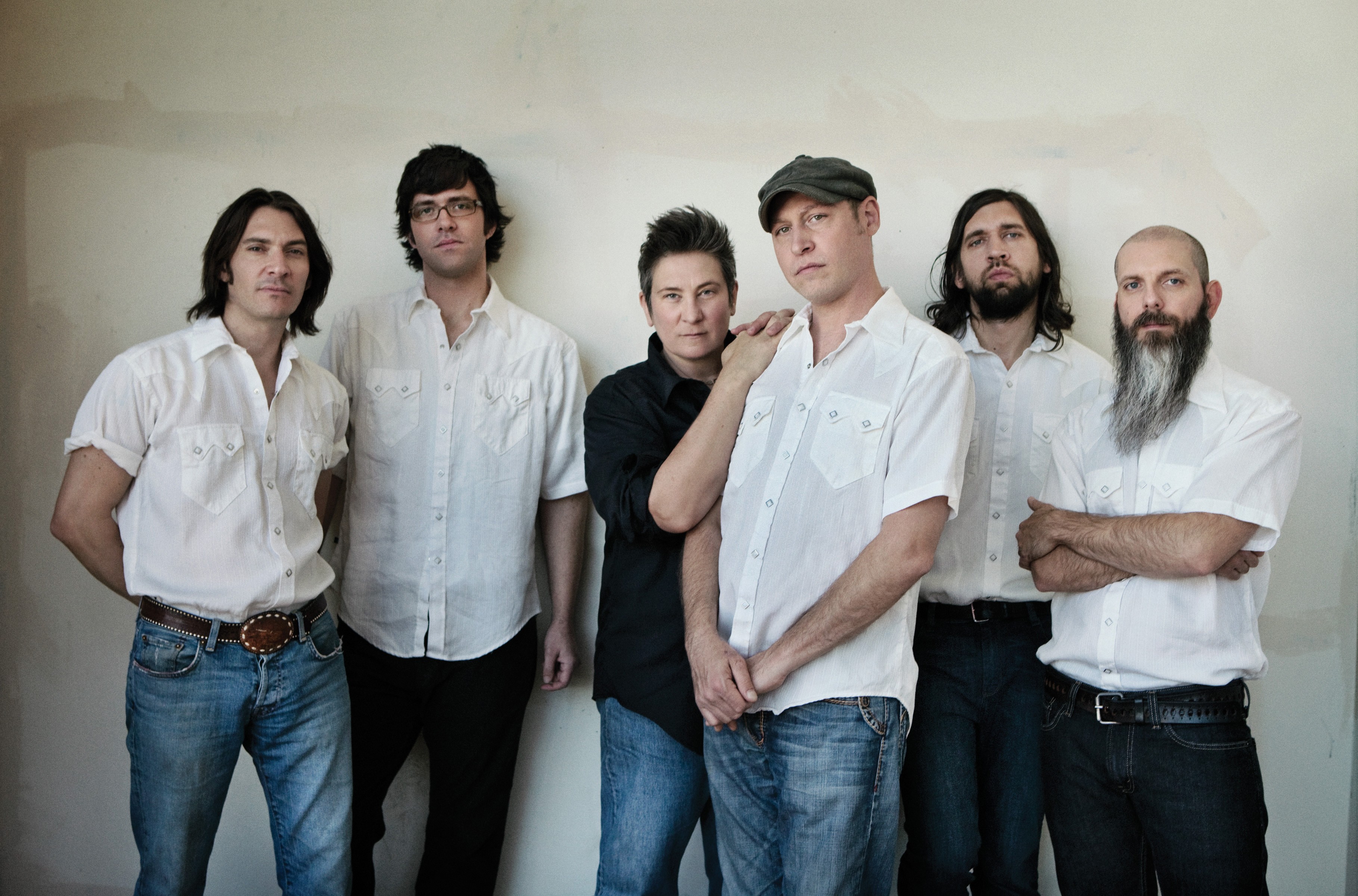 It's official: College is back in session. Are all of you new students ready to party? Better get ready, because the HSU campus music machine has a full slate of shows for you (and the "community") as the new CenterArts season gets rolling with a couple of shows next week, and Associated Students Presents throws no fewer than five dance parties Friday and Saturday.

The biggest name here is k.d. lang, the androgynous alt. country star who stole the show at this summer's Kate Wolf Festival. Lang plays the Van Duzer on Wednesday, Aug. 29. (Athens, Ga.-based alt. folk/country songwriter Lera Lynn opens.) When I showed up at Kate Wolf on a July Sunday, pretty much everyone I spoke with raved about her Saturday night set, usually mentioning Vegas and/or Elvis in the process; "Patsy Cline meets Wayne Newton" was how one friend put it. The few who did not like her show missed her old cow punk material and complained about the Vegasy aspects, that her moves and her voice seemed too studied, even slick. Lang has been working with a new band, Siss Boom Bang, led by guitarist Joe Pisapia, who she met when she played Nashville's Ryman Auditorium, home of the Grand Ol' Opry. She was ready for a new direction. "I love going where I'm not supposed to go," she says in her publicity material. "I love feeling like I'm starting at square zero again. I thrive on it."

Opening the CenterArts season Tuesday night is alt. country singer-songwriter Brandi Carlile, who has been cutting one hit record after another with twin brothers Phil and Tim Hanseroth since 2004. Her latest, Bear Creek, came out earlier this summer. Opening the show: Canadian folkies The Barr Brothers with Andrew and Brad Barr of The Slip.

AS Presents launches its season Friday, with a pair of shows in the University Center: First up the Missing Link All-Vinyl Revue (as in Matt ‘n' Adam, Mantease and DJ Red) in the South Lounge with very special guests from Numero Group. As Missing Link Records owner Adam explained it, ASP booker Michael Moore let them choose anyone they wanted to join them playing records. The dudes from the Chicago-based Numero reissue label were at the top of the list, heroes to soul music crate-diggers. These are vinyl hunters with a mission, according to a press release, "to dig deep into the recesses of our record collections with the goal of finding the dustiest gems begging to be released from their exile on geek street. No longer would $500 singles sit in a temperature-controlled room dying for a chance to be played. No more would the artists, writers and entrepreneurs who made these records happen go unknown and unappreciated." Did I mention there are door prizes? Expect retro soul heaven.

Saturday the ASP action starts at 6 p.m. with a free show on the Quad featuring S.F. neo-psychedelic soul/heavy funk band Monophonics, who play music that sounds like something discovered by a crate-digger. Opening the show is another vinyl spinning record store owner, DJ Zephyr, aka Bandon Wayne, from The Works. Then it's a repeat of Friday's action with variations: The Missing Link DJ crew returns to the South Lounge, this time with DJs from Secret Stash, a Minneapolis reissue label specializing in classic international soul and psyche. In the KBR it's Portland EDM artist Doug Appling, aka Emancipator, with his trippy, organic take on electronica. He's joined by Ninja Tune's Yppah and another Portlander, Anomie Belle, a former classical violinist gone EDM. She'll do her own set, then perform with Yppah.

Friday at Humboldt's EDM central, Nocturnum, WERK productions presents dubstep/drum ‘n' bass artist SICKorWELL, plus Itchie Fingaz, who won last year's Journal readers' poll as "Best Club DJ." (The 2012 poll is under way; look for the ballot elsewhere in this issue). Opening the show is @uDioGa$m, whose moniker reminds me of a well-crafted computer password.

Austin's T Bird and The Breaks play "chunk music" Thursday at Humboldt Brews with a new local funk/rock/etc. combo River Valley Mud. By the Breaks' definition, "chunk" is "a form of 21st century American music consisting of equal parts funk, hip-hop and rock ‘n' roll characterized by its rough sonic quality and energetic, visceral performance. Commonly served hot with a side of girls and brass." While the band is from Texas, there's a touch of New Orleans involved.

The Brothers Comatose are back in town for a Saturday gig at Humboldt Brews. The rollicking post-old-time band first came together in the living room of the Morrison household with brothers Ben and Alex Morrison strumming guitar and banjo respectively, and friends joining the party, among them standup bassist Gio Benedetti, fiddler Philip Brezina and mandolinist Ryan Avellone. A bona fide band jelled with the Bros landing high profile gigs at Hardly Strictly Bluegrass, High Sierra, Strawberry, and most recently, Outside Lands, which I suppose means they can add opening for Neil Young, Stevie Wonder and Metallica to their resume. Impressive.

Are you ready for some hell-bent country? Sunday at Dean Creek Resort it's "That Damn Show" featuring the rip-roarin' grandson of country legend Hank Williams, Hank 3. The all-day show also includes Angel's Cut, Greg Ginn and The Royal We, The Dirt Floor Band, Matt Borden, Wolf Hollow Revival, local alt. country faves Gunsafe, and Butch the mechanical bull (for those with cowboy fantasies).

The Portland onslaught continues: Friday at the Lil' Red Lion it's a PDX two-fer with Dramady, a two-piece with Amanda Wiles on bass, clarinet and saxophone, and Zac Stanley on drums and keyboards (simultaneously) playing what's described as "highly rhythmic danceable pop with groove laden dub bass and melodic horns," on tour with "folktastic" Portlanders The Betwixties. The Bandage provides local support.

At the Alibi Saturday, ViSes, who tell us via email, "ViSes is a post-hardcore/dance-punk band from Portland that blends heavy guitar riffs and fierce female vocals with powerful drums and groovy bass lines to create an extremely volatile Molotov cocktail capable of inciting a riot just as easily as inciting a dance party." Sounds dangerous. Local rockers Indianola open.

More punk Sunday at the Lil Red Lion with L.A.'s Dr. Velvet and The Social Drinkers, who have a split 7-inch out with tour mate Brian Berwind, aka Proof & Proving, a punky guitar-strummer guy from Philly. (They used Kickstarter to raise $3K to press the record and go on tour.) Humboldt comedy rock terrorists Splinter Cell and a new outfit called SFB provide local support.

Drummer Alan Evans of Soulive split off to form his own piano/organ funk/jazz trio, appropriately known as the Alan Evans Trio. The combo jams at Jambalaya Saturday night after an opening set by that new local funk big band, Motherlode.

Persimmons Garden Gallery in Redway has a rare Monday show on Aug. 27, with The Band Of Heathens, a top-flight Americana outfit from Austin fronted by a pair of seasoned songwriters, Ed Jurdi and Gordy Quist. The sound is Texas-style rock with shades of country and blues, good stuff.

Anyone else remember Sarah-Jane Moody, lead singer for the all-girl Southwestern alt. country band The Dolly Ranchers? She's now half of an alt. pop duo called GoGoSnapRadio with Jeremy Bleich, formerly of a band called birth. They play quirky, experimental music on junkyard instruments (a trash can lid, for example) and the occasional guitar and synth. A West Coast tour brings them to Synapsis (same building at Ink Annex/Placebo) for a show on Wednesday, Aug. 29, with local guitarist/songwriter Olin Howabauten opening.