Getting (Back) Into Running with Six Rivers Running Club 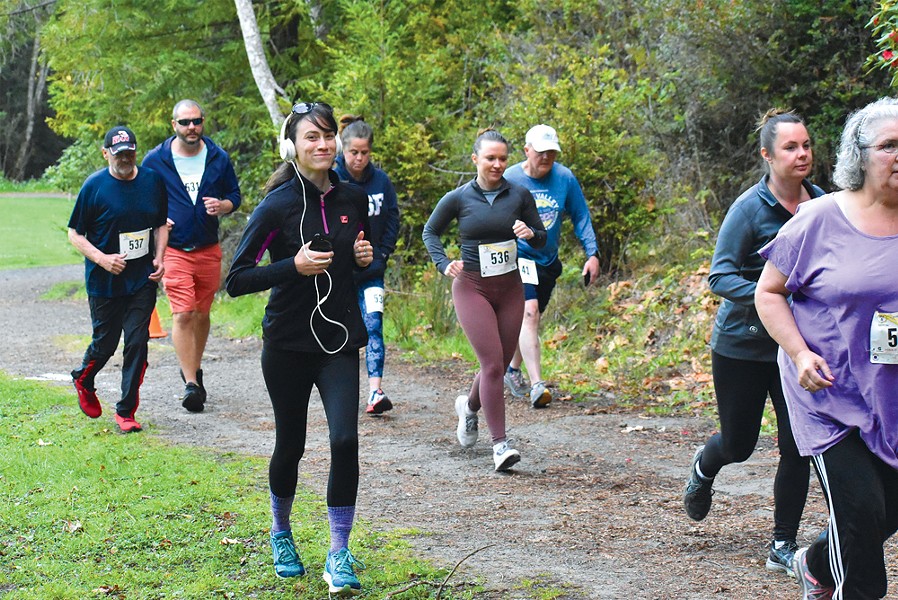 Photo by Yoon Kim, courtesy of Six Rivers Running Club The author cheesing at the camera at the start of the 2-mile Arcata Community Forest Run.

I've been out of the running game for a while. I let my old jogging habits fizzle out during the pandemic, but once I got vaxxed and moved to Humboldt in 2021, it hardly seemed right to let all the scenic jogging spots go to waste. I kicked my feet off the couch and found Six Rivers Running Club.

Pulling myself out of bed last Saturday to run 2 miles straight uphill with other club members was no easy feat but the view of the redwoods was well worth the short trip from Eureka. After resolving to walk the inclines and run the downhill slopes, I realized I could actually do this every weekend. It felt great to talk to new people and have a line of strangers clap for me and offer me water as I wheezed across the finish line.

To learn more about upcoming running events to help get me — and hopefully some of you — out on the trails, I sat down with Gary Timek, president of the SRRC, and Jack West, president of the club's youth branch.

"We just want people to have a good time, get together and stay healthy," West said.

SRRC hosts and participates in a number of all-ages events throughout the year, including the Trinidad to Clam Beach Run, where hundreds of runners splash across Little River in Trinidad. The race was revived in February after being canceled last year due to COVID ("Clam Beach Run Splashes Again," Feb. 3). Another of the county's most famous races, the 50th Avenue of the Giants Marathon, is resuming this year but it's already sold out.

If you missed out on these races, SSRC has more events planned for 2022, including virtual 5Ks for those who want to run on their own time away from crowds ("Running Your Own Race," Nov. 4, 2021).

I participated in my first SRRC run in February: the Arcata Marsh Virtual 5K, a self-guided race run alongside the striking Arcata wetlands. Running a virtual 5K was a great way for me to get a baseline mile-time for myself and see exactly how out of shape I had become over the past couple of years.

The answer is: very. I was outranked by more than 30 women — most notably by a 9-year-old girl named Georgia. I do not know Georgia, but she has made me all the more determined to improve my time and hopefully one day run alongside the scores of infinitely-more-fit 9 year olds.

Speaking of children, a virtual race can be a great activity to do with kids. Humboldt Redwood Running Association for Youth (HRRAY) is the youth branch of SRRC and its website at www.hrray.org has resources to help you get your children up and moving.

"We get kids all the way down from kindergarten, all the way up through eighth grade, which is a lot of fun," Timek said.

The club's next virtual 5K, the Hammond Trail "Virtual" Run 5K, can be completed anytime over the month of April and is free for runners of all ages. You can send your times to the club leaders and view your ranking online. I used the Map My Run app to keep track of my mileage and pace.

While there are fewer races this year than usual, the club is slowly resuming a regular race schedule with no masks or social distancing required. However, SRRC can accommodate people who want a staggered start time to put some space between them and other runners. Virtual races will continue through the end of this year but whether SRRC will continue hosting remote events in 2023 remains uncertain.

If in-person activities are more your speed, here are some upcoming races and three weekly running groups open to all.

The Sunday Morning Run Group meets from 7:30 a.m. to 9:30 a.m. at the corner of L.K. Wood Boulevard and Granite Avenue in Arcata, and runs to the Arcata Marsh.

The Saturday Morning Run Group meets at 9 a.m. on the 700 block of Fickle Hill Road and runs through Arcata Community Forest. Tip: Be prepared for a mostly uphill jog.

The Wednesday Afternoon Run Group meets at 5:30 p.m. at varying locations in Arcata and Eureka.

On Saturday, April 16, SRRC is hosting an in-person 10K Master's Race for runners aged 40 and older. The cost is $10 for nonmembers, free for SRRC members. It will start and finish at Clam Beach Frontage Road.

On Mother's Day, Sunday, May 8 at 10 a.m., there will be a women's-only race: the 39th Atalanta's Victory Run and Walk supporting the Breast and GYN Project. The cost for members and non-members is $15 for the 2-mile race and $20 for the 5-mile race.

The cost to join SRRC is $30 per year for individuals and $40 for a family membership. You can sign up online or find more information on future runs at www.6rrc.com.

Carly Wipf (she/her) is a freelance journalist living in Eureka. She is also a new member of Six Rivers Running Club happily running at the back of the pack.