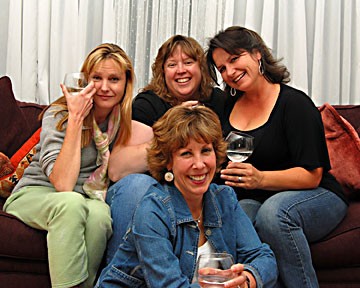 After rescuing Opera Omaha and growing the Sacramento Philharmonic as executive director, Dell'Arte cofounder Jane Hill has returned to the North Coast, where she's also known as a stage performer, dramatist and director. When she first presented her monologues in Getting It, she performed all four characters herself, making her costume changes on stage. In revisiting the piece for the Redwood Curtain production currently on stage at the Arcata Playhouse, she added a new character (as well as other changes to the text) and directs five actors, one per monologue.

Margaret (played by Lynne Horrigan) is a middle-aged married career woman who has a memorably defining moment in a pole-dancing workout session. Lola (Susan Abbey) is a middle-aged divorced woman who describes her post-marriage journey, carrying forward the theme of sexuality and physical identity, but she also moves on to the theory and practice of service as a life commitment.

Linda (the new character, played by Siena Nelson) is a singer-songwriter in her late 20s who describes events leading up to her divorce -- as it happens, from the same man as Lola -- which includes some satisfying tables-turning. The monologue also includes a song by this Nelson sister. Agnes (Christina Jioras) is the self-justifying nursing supervisor at a convalescent care home, and Shirley (Tinamarie Ivey) is one of the patients, a wily 110-year-old (well, 92, really, "but nobody's interested in any old woman unless she's over a hundred"). She's also "the world's oldest living tap dancer," who performs with a walker, living the philosophy of another patient who discovered the reason she's still alive by studying the flowerbed outside her window: because she's "still blooming."

I saw the show in its preview performance, when (ironically perhaps) it returned to being a four-character evening, due to a rehearsal accident that sidelined Christina Jioras, off getting treatment at curtain time. (She returned to perform Saturday, accompanied by a cane to compensate for a torn hamstring. Once again, evidence that theatre ain't for sissies.)

On a relatively bare set with a backdrop of four attractive screens suggesting the seasons, each character makes a public presentation -- at a conference, an award ceremony (for Divorce Recovery Woman of the Year), a support group, a media tour of the convalescent home and entertaining a local service club.

The current phrase "getting it" signals the acquiring of an important and perhaps life-changing understanding. Something clicks, which usually involves recognizing facts in the outside world as well as internal insights. For four of these characters, "getting it" may be sudden, even violent, or the result of a series of experiences or insights, leading to action, usually related to marriage, identity and life purpose. (On the page, the exception is Agnes, the nursing supervisor, who seemingly doesn't "get it" at all. But that's the performance I didn't see.) All five women have a connection (or two) to at least one of the others, and there's a sixth woman we never meet who is important to what several of them "get."

Since the issues are mostly feminist, with a couple of the women taking decisive (even homicidal) action against unfaithful spouses, there is a built-in identity politics appeal to the evening. But it's also replete with theatrical moments, humor and human insight.

All the actors bring personality and dimension to the characters with their assured performances. Through the writing as well as the performances, we also recognize the characters we don't actually see. With Jane Hill's script and deft direction, this production of Getting It pleases and holds the audience's interest, while offering insights and memorable moments to take home.

I have some quibbles. It's a brisk, economical evening; that may exact a cost in clarity and missed opportunities. The light touch that helps to keep it all positive may be too consistent. Themes remain contemporary, but some of the references seem dated. It's awkward to comment on the part I didn't see, but at least in the text, the character of the supervising nurse seems completely different from the others, jarringly one-dimensional and unsympathetic. How it plays in performance may be another matter.

That said, it's an illuminating and entertaining evening of theatre. The performances in particular are impressive and winning -- and it's a special pleasure to see Siena Nelson return to the stage. Getting It plays this weekend (Nov. 13-15) and next (Nov. 20-22.)

This is another Redwood Curtain production at the Arcata Playhouse, and there are three more scheduled next season. Meanwhile the search for a permanent RC home goes on -- including a plea in the program and on their website for anyone with "a spare warehouse? A barn? An extended garage that seats at least 75?" The enticement is "rent money we don't know what to do with!" Given the current realities of real estate, this might be an attractive offer, so the number to call is 443-7688, or www.redwoodcurtain.com.

Coming Up: This Thursday (Nov. 13), North Coast Rep opens She Loves Me, a romantic musical comedy that was the first show ever at NCRT, 25 years ago this season.