The Haunted History tour bumps in the night 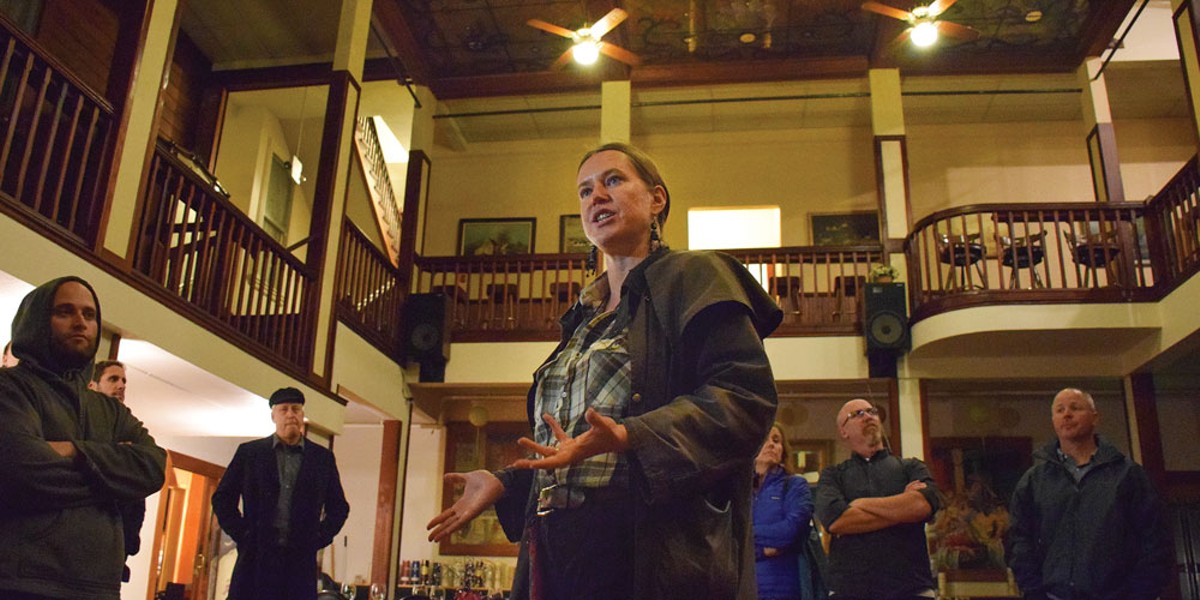 Most of the sky has darkened but for an apricot streak of sunset over the mouth of Humboldt Bay. Alex Service stands with her back to the water at the foot of F Street, her brown, oilcloth duster flared out behind her as she sets the scene for a crowd of 30. She asks them to imagine what this cluster of streets and Victorian buildings looked like 150 years ago in a smaller, wilder Eureka with the redwood forest butting up against G and Fourth streets, the bustling harbor, the Native American village across the water and William Carson in his mansion up the road. She tells them of Hans Henry Buhne, the Danish sea captain who guided the first ship into the bay and the bride he lost to its waters years later, her voluminous dress and petticoats billowing in the water and dragging her twice from his grasp.

The big group for the Old Town Haunted History Ghost Tour turns toward the Hans Henry Buhne building as Eric Volmers picks up the tale. Standing 6 feet 6 inches in a dark wool coat and a Greek sailor's cap over a pate of white hair, his voice is soft and drifts in like a fog overhead. The building is the oldest in Eureka, he explains, housing a private museum upstairs and stories of Captain Buhne's presence. Neighboring shopkeepers and residents, he says, report cups sliding along tabletops on their own, the sound of footsteps after hours and the feeling of being watched.

Volmers and Service are not ghost hunters — there are no night vision goggles or odd instruments — and they welcome skeptics and believers alike. "We're telling stories," says Volmers, an Arcata High School history and government teacher by day. Some six years ago, his sister gave him the idea for the tour after taking one in San Francisco. He was toying with the idea when he stopped by for a drink at Oberon Grill, where he got to chatting with owner Roy Cole about the building's checkered past and accompanying ghost legends. After that, Volmers "went on a bit of a pub crawl," asking questions and listening to tales from owners and regulars. Then he dove into research at local libraries, Humboldt State University and the county's public records offices, looking up census records, court documents and newspapers for stories of real people to see if they matched the whisperings. Before long he had more than enough material for a two-hour tour.

Service, curator of Fortuna's Depot Museum, joined him a year later, putting her historian chops to work recording local lore and researching its origins amid the speakeasies and scandals of Eureka's past. Her medievalist doctorate might seem an odd fit, but she studied at the University of York — York, mind you, bills itself as the title of most haunted place in England — where she continued to feed her childhood fascination with supernatural history. Service says she "would love to see a ghost," but, alas, she's "not sensitive to that." She and Volmers do, however, know how to spin a yarn.

Across from the Waterfront Café, Service stops the crowd — a birthday party and a group of elementary school teachers among them — to recount the history of the Bluebird, one of old Eureka's 30 bygone brothels, which turned a brisk business upstairs. There are giggles over the tale of the headless man seen walking the train tracks at night, but a hush falls as Volmers shares the grim death of an unhappy Swedish boarder. "Imagine," he says, "cutting your own throat." Was this the unseen "angry man" that spoke to a cleaning lady's daughter years later? We cross the street quietly for a pastiche of rumors about the tunnels that supposedly run under the streets — used by bootleggers, publicity-shy Johns, Chinese on the run from an angry mob — before making our way to the Vance Hotel. A passerby listens for a moment and assures us that the Vance is indeed haunted by a woman who just this week has been breaking things.

And the Vance does not disappoint: We crane our necks upward, listening to our guides regale us about the building's former owner, who leapt to his death from one of its windows, salon employees seeing shadowy forms disappearing into walls and plumbers who've run screaming from voices in the basement. Imagining all this and crossing the brick-paved street to trace the rumored tunnel to the brothel at what is now the Oberon Grill, the Old Town where we work, run errands and fret over parking tickets is transformed. The ornate facades that inarguably have character start to feel like characters, witnesses and survivors of more feral generations, unlikely to be shocked at what we have to show them. We cut through the restaurant, the scene of Jack London's brawl, passing beneath both the chandelier people say has spun on its own and the second-floor, where a woman in period dress is said to appear and disappear.

We wind our way through alleys and tree-lined streets, Volmers and Service stopping for snippets of eerie tragedy, speakeasy shootouts, unhappy spirits of harassed women who drift former bank hallways and the handsy bosses who linger to grope the living. (Really, jackass? That's the unfinished business keeping you on this side of the veil?) In the Eagle House we hear of strange goings on in rooms 24 and 25, and workers reporting floating balls of light — we also lose one couple to the bar at Gallagher's. The rest of us pause along First Street to consider Eureka's very real horrors, the massacre of Wiyot people at Indian Island that earned Eureka the title of "Murderville, California" in the national press — a nod to the dark side of the town's wild days.

The tour ends at the gazebo with a final image of bygone Eureka, the real ghost on this tour: the carriages and sailors, the drunks stumbling into the street to be swept up either by the Salvation Army Band or the ladies of the Alpine Hotel. After a little applause, a handful of people head back to Oberon Grill, some to see if they can get upstairs, the guides for a drink at the bar. If you've got a little more time, join them for that drink and ask about the Carson Mansion and the Carson Block Building — they have plenty more stories to tell.

You need to reserve a spot ($20) on an Old Town Haunted History Ghost Tour by calling 672-5012. Tours run with a minimum of five people, so you can either jump in with a group or pony up $100 for a private walk. The tour meets up at Old Town Coffee and Chocolates at 7 p.m., and a hot chocolate on a cold night isn't a bad idea — might even help with those chills.