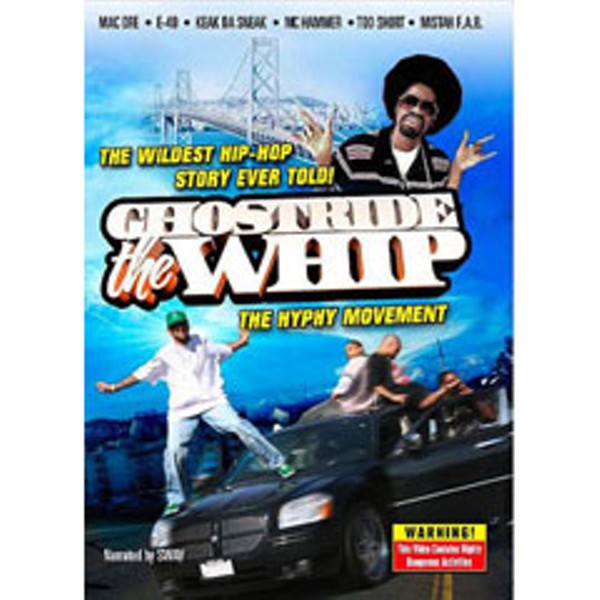 If we were to put the Oakland Hyphy movement and its precursors on a timeline, it would look something like this, according to Ghostride The Whip: Black Panthers social solidarity movement ... city wide crack epidemic of the ’80s ... MC Hammer ... Too Short ... Mac Dre ... Hyphy.

Narrated by MTV anchor and Oakland native Sway Calloway, the 80-minute experience (for lack of a better word) searches to define the Hyphy movement through a series of interviews with Bay Area artists including E-40, Keak da Sneak and Mistah F.A.B., while providing extensive footage of sideshows, Mac Dre and of course, ghostriding.

Whether or not "getting stupid retarded" (the slated goal of "getting Hyphy") can be considered a social phenomenon on par with the Black Panthers movement is terrifically debatable, though linking its roots to the early East Bay hip hop movement is certainly valid. With Oakland's crime level nearly seven times the national average, the city's hip hop scene evolved as the voice of frustrated youth in the early ’80s with two rappers at the forefront: MC Hammer and Too Short. "Too Short showed us everything," states Hyphy interviewee Mistah' F.A.B., "from [selling his work] independent out of the trunk, to freestyling songs for 10 minutes, to being one of the first rappers to say 'Bitch, fuck you goddamn shit-ass ho.' That man is Hyphy."

While Too Short spoke of life on the street "promoting pimpin' to the death," MC Hammer took his music to a larger audience by marketing a dancier sound. With the emergence of Vallejo rapper Mac Dre in ’89 as the proclaimed spokesman for the Bay Area party scene, underground hip hop was soon influencing style and culture beyond Oakland's boundaries. As the scene grew, social gatherings paired with car stunts known as sideshows followed, which soon evolved into the "who's crazier" competition of riding on top of your own moving vehicle: ghostriding.

While some consider the amalgamation of sideshows, thizzing (dropping ecstasy) and ghostriding a uniting social and cultural movement, others, such as the Oakland Police, beg to differ, citing the heinous dangers of the "lawless invincibility" that getting Hyphy promotes. Even Mistah F.A.B., who often cites the "thizz or die" lifestyle in his lyrics, isn't keen on the designer-drug epidemic as a staple of the movement. "A lot of these kids be lookin' up at us sayin', 'Man, I'm thizzin' off your shit right now!' And I be like, 'Man, I don't thizz.' Don't thizz!"

Cultural movement or reckless party scene? You decide. Pick up the vid or see Too Short live at the Arcata Community Center Sunday, March 22, with special guest Traxamillion (who appears in the movie), plus Subliminal Sabotage and more.