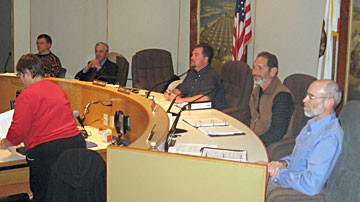 By the staid, bureaucratic standards of the Humboldt County Planning Commission, last week's town hall-style meeting was a wild one. Granted, those standards may be lower on the drama-scale than those of, say, Arcata City Council meetings, but the idea, at least, was to hold a let-your-hair-down, loosen-your-tie brainstorming session (in the midst of more formal scheduled deliberations) on the contentious issues in the general plan's housing element -- issues like how to make homes more affordable and where to house the house-less.

The long-overdue general plan update has been inching forward since 2000, and this public review process is one of the last remaining hurdles before implementation. "This format is intended to be more interactive than our standard process," Commission Chair Jeff Smith explained to the nearly full chamber. "We're going to suspend [the usual] formalities, presuming we can do this without anarchy."

He needn't have worried. Call it an excess of community-minded civility, or maybe simple shyness, but the open public-comment period began with more vague requests than specific suggestions, more polite observations than assertive demands. A few comers literally wore their opinions on their sleeves (OK, lapels) in the form of anti-inclusionary zoning buttons but shied away from such absolutes once they had the floor. If anything, the meeting could have used a little more anarchy.

Then again, maybe reserved deliberation is the best modus operandi when crafting the "county's Constitution," a document that will guide the growth and development of our unincorporated areas for the next 20 years or so. While the housing element of the general plan gets revised on a state-mandated five-year cycle, the planning commission is taking an extra-close look this time around given the concurrent revision of related elements like land use and community infrastructure. Plus, Humboldt County hasn't exactly been meeting its housing goals in recent years.

Taking matters one issue at a time, the commission opened the discussion with market-rate homeownership. "We used to have a very high [homeownership] rate," Community Development Services Director Kirk Girard lamented from his witness-box-like spot beside the commission panel. We don't anymore. The county's housing affordability index -- a measure of wage earners' ability to afford a median-priced home -- has been among the lowest in California in recent years, and California, in turn, has the second-lowest homeownership rate in the country.

This disquieting trend has shown signs of a rebound lately. Our affordability index rose to 18 percent in November (meaning 18 percent of working county residents could afford an average home), then rose again in December to 23 percent -- its highest mark since May 2004, according to Tom Hiller, former president of the Humboldt Association of Realtors. "These are some pretty eyebrow-raising numbers," Hiller said. Still, they're a far cry from the 50-percent affordability Humboldt County enjoyed 10 years ago.

Girard explained how the general plan update could help matters further. Plan Alternative B, which is listed as the "identified proposed project" under the California Environmental Quality Act (CEQA), offers several approaches, most notably the promotion of "infill" development. Since the county's water and sewer infrastructure currently leaves much to be desired, the planning staff (along with anti-sprawl environmentalists) say it simply makes sense to build where those services already exist. Alternative B also calls for the creation of "housing opportunity zones" -- specific geographic areas where low-income housing could be built, thanks in part to relaxed building standards.

Both matters were subjected to reserved, civil debate, but the real hot-(lapel)-button issue was inclusionary zoning. In a nutshell, IZ would require that a certain percentage of low-income housing be included in all major developments rather than confined to certain opportunity zones. Proponents say IZ is a necessary measure to keep low-income families from moving away. Taking the cordless microphone -- which was being passed around the room by Smith's daughter, Sarah, a student at Zane Middle School -- local resident Bill Spencer said he considers long-term low-income housing an essential part of a complete community. "Just saying 'no' isn't going to [help] those just starting on their careers or just ending their careers," Spencer said.

Developers and realtors are adamantly against the idea. Several spoke up Thursday, saying that making IZ a requirement would be counter-productive because it would constrain development and raise home prices overall. Should the county go from barely encouraging to explicitly requiring this zoning, they said, it would be taking two big steps where one might be more prudent.

Girard wasn't buying it. "It is a requirement," he said. "It's intended to rectify the pattern that's occurred under the free market in the last planning period." That five-year period saw the county exceed its minimum targets for moderate and above-moderate housing production while vastly under-producing homes for low and very low income levels. "That was the mix you would get without a requirement," Girard said. In other words, unless you mandate it, low-income housing doesn't get built.

In the spirit of tossing decorum out the window, Commissioner Sef Murguia then took it upon himself to vent. "You know, we're often expected to sit up here like seven brass monkeys -- or however many of us there are -- and think, hear or speak no evil," Murguia said. "And I don't really think that's a planning commission's role. I think a planning commission's role is to not only determine the timing and scope and extent of development but also, based on where the community seems to be going, to incite and in some cases to force a trend." He declined to specify which trend exactly needed forcing but did request people dispense with the pussyfooting and say what they want already. "Give us your opinions," he suggested.

"Thank you for the opportunity, and I'll be happy to do that," responded Julie Williams, representing the Northern California Association of Home Builders. Murguia's rhetorical leg-stretching and Williams' eager reciprocity (the NCHB is against opportunity zones, she said) spoke to a developing consensus: This town hall style is pretty cool. As the topics moved on to the rental market, emergency and transitional housing and land inventory, the microphone traveled from one end of the room to the other, points and counter-points bouncing off the paneled beige walls. Representatives of environmental group Healthy Humboldt called for energy-efficient homes in proximity to transit. Estelle Fennell, executive director of the Humboldt Coalition for Property Rights, spoke up for the rights of rural landowners. A man who traveled through Europe suggested youth hostels or elder hostels be used for the homeless -- "Or how about a giant circus tent?" he said. (Girard wrote that one down.)

On other topics there was either agreement or no point in debating. Encouraging more secondary units was an idea everyone seemed to like: It provides low-income housing in established service areas with little risk of zoning disputes. Girard mentioned the possibility of allowing more rental property development in commercial zones. He also addressed a new state law that requires all jurisdictions to identify zones in their housing elements where emergency shelters and transitional housing are allowed without the usual permitting process, NIMBYs be-damned.

As the meeting was winding down, Kay Backer of pro-development group Humboldt Economic and Land Plan (HELP) echoed the sentiments of many in attendance. "We would really encourage you to have more town halls," Backer said. With all the discussion, the commission ran out of time to address the final item on their agenda (very and extremely low-income housing) and the meeting was continued to Feb. 19, when the usual rules of order will be restored. That meeting and one more on Feb. 26 will be the last opportunities for public input on the housing element.