Photo by Mike Kelly An anemone with a bit of digested and ejected crab. 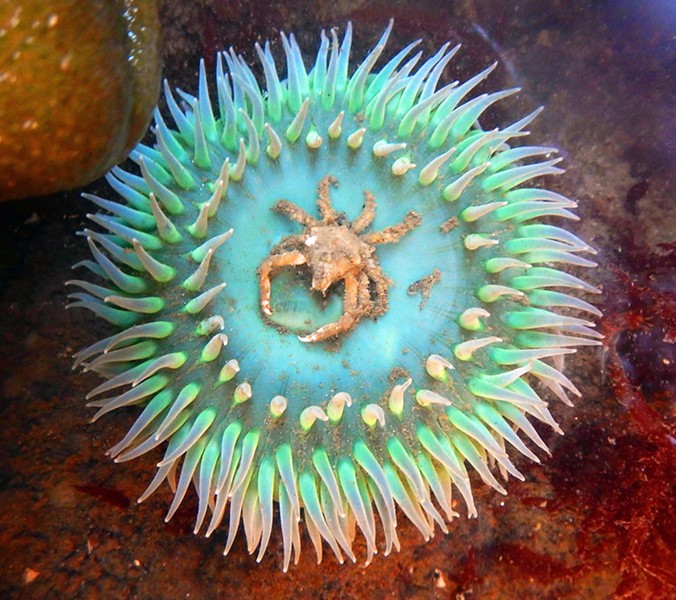 Photo by Mike Kelly A crab with a possible layer of protection. 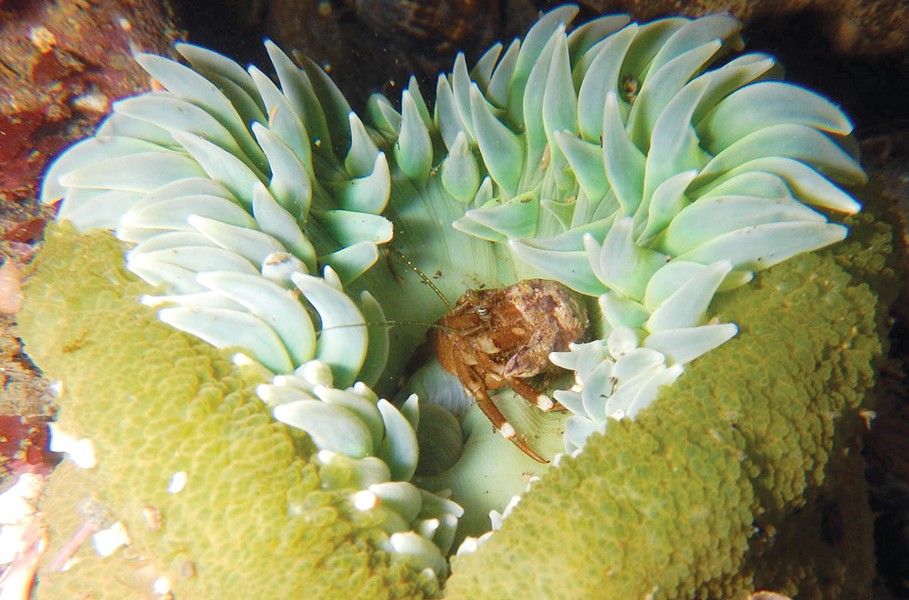 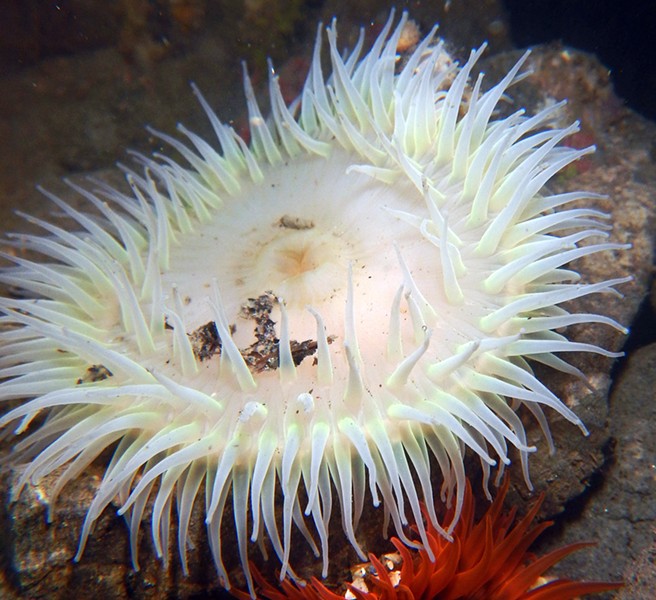 Photo by Mike Kelly A pale giant green anemone in a dark spot at Palmers Point.

Photo by Julie Kelly A cross-section of a microscopic nematocyst thread found in a sea slug.

One drawback of beachcombing is the lack of cheerleaders. So, I assembled my own crew of former NFL and CFL cheerleaders who had been fired for various deviant behaviors.

I said, "Welcome. Here are your pompoms. They are designed to look like the giant green sea anemone, Anthopleura xanthogrammica."

The cheerleaders waved their bright green pompoms and chanted, "Give me an A!" And I shouted, "A!" And they proceeded letter by letter, all the way to: "What's that spell? Anthopleura xanthogrammica! Woo!"

I said, "Giant green anemones range from Alaska to Central America, and they are common in our local tide pools. Despite being squishy, they are tenacious and don't dislodge easily. So, I don't find them washed up very often. And when they do wash up, they look like greenish fleshy lumps, not pompoms."

But because this is my fantasy, I impressed the cheerleaders by immediately finding a washed-up giant green anemone. I said, "Hey, you cheerleaders, this stranded anemone is still alive. Maybe it was knocked loose by an object in the surf."

The cheerleaders said, "Well mister smarty-pants, it's pronounced pom-pon, not pom-pom. You lookin' to get flagellated?"

"Shhh, not now," I said. "Anyway, most washed-up invertebrate animals are difficult to place back into the wild. But anemones are sometimes an exception. This anemone could live 100 years, so we might as well try. I'll place it here in this rocky tide pool, hopefully close to its home. It will happen slowly but if it can attach its foot to these rocks, it can 'walk' around to find the right spot."

I said, "That's right. And did you know that while the giant green anemone isn't a plant, it gains energy through photosynthesis? Yep, its tissues provide a home for symbiotic microalgae called zoochlorellae and dinoflagellates called zooxanthellae. These single-cell organisms contain chlorophyll, so not only do they contribute nutrients to the anemone, they enhance the anemone's color. These organisms don't thrive without sunlight, so giant green anemones living in dark areas may turn pale."

"Dino ... flagellates?" shouted the cheerleaders. "Now we're talkin'. Dinoflagellate zooxanthellae! If you don't like 'em, you can go to hell, eh! Woo!"

I said, "Anemones are carnivores that eat mussels, crabs, fish, urchins or anything else unlucky enough to encounter their tentacles. Like its relatives the corals and jellyfish, the anemone's tentacles contain many stinging cells called nematocysts, which can immobilize prey before closing around it and transferring the meal to its stomach."

I continued, "Touching a nematocyst triggers an explosive firing of a tiny, barbed thread that penetrates and holds the victim while delivering venom. However, some sea slugs that eat anemones can swallow the nematocysts without triggering them, and then the sea slugs incorporate these weapons into their own bodies for self-defense. Also, some fish and crabs develop a slimy layer that prevents the nematocysts from firing. Some slimed-up hermit crabs can even feed on anemone tentacles. Other slimed-up creatures hide among anemones, which form an impenetrable defense from predators.

They had offense and defense backwards, but I let the cheerleaders oil me up anyway. They pumped their pompons and things were getting good. But then a bunch of linebackers tackled me.