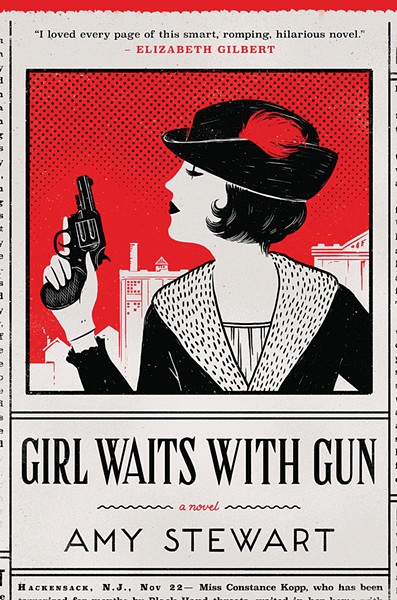 Amy Stewart is familiar to most people in Humboldt County as A) co-owner of Eureka Books and B) a successful author of nonfiction, most recently the bestselling The Drunken Botanist. (She's also a former Journal columnist.) Now she has decided to try her hand at fiction with the historical novel Girl Waits with Gun.

But GWG is not set on the North Coast, or even in California; instead it takes place in New Jersey early in the 20th century. Based on real newspaper accounts of the era, it tells the story of one Constance Kopp, who took up arms to protect herself and her sisters from the ne'er-do-well scion of a textile manufacturing family.

The action starts with a bang, when the horse-drawn buggy carrying Constance and her sisters Norma and Fleurette collides with a recklessly driven automobile. Behind the wheel is Henry Kaufman, a wealthy "silk man": exploiter of workers, defiler of women and general menace to society. When the Kopps demand restitution for the damage, Kaufman begins a campaign of harassment against them and we're off.

The sisters live alone on a farm, much to the chagrin of their brother, who doesn't think they can look after themselves. And herein lies the central question of the novel: can they or can't they? It's no spoiler, I don't think, to say that Constance — who narrates — emerges as the heroine. There she is on the cover, looking a bit more glamorous than you might think from the way she's described inside (marketing's call, no doubt). Constance is formidable but vulnerable, bold and forthright, yet tender-hearted. She also has a "shameful" secret, but that's not going to stop many readers from rooting for her.

She makes for a compelling and sympathetic protagonist, a woman hemmed in by the circumstances of her times but unwilling to meekly accept the limitations imposed upon her by society. Refreshingly, romance is not one of her major concerns; she just wants for her sisters and herself to be able to live lives of their own choosing. Her code of conduct is simple and straightforward: "We have to be part of the world in which we live. We don't scurry away when we're in trouble, or when someone else is. We don't run and hide."

"Simple and straightforward" would describe Amy Stewart's prose style as well. She communicates clearly and directly, mostly avoiding $10 words and complicated locutions. This book will not be filed in the Young Adult section, but young people could easily read it, and may be entertained enough not to notice that they're being taught some history and absorbing messages of female empowerment.

Girl Waits with Gun wears its feminism on its sleeve and also dabbles in class conflict. A recent, violently suppressed strike by silk workers figures in the plot, as does Kaufman's habit of taking advantage of his female employees. There's not a lot of moral ambiguity here — as with the cover illustration, there's black and white and a bit of red, but not many shades of gray. That could be a weakness or a strength depending on what you're looking for in your reading material.

Meticulously researched and plotted, this book is almost too perfectly constructed, but enlivened by its characters. In addition to Constance, we meet dour, stubborn, pigeon-loving Norma and innocent, flighty Fleurette. White male villain Kaufman is counterbalanced by kindly Sheriff Heath, who not only encourages the sisters to defend themselves, but even provides them with revolvers. (Apparently "community policing" meant something a little different in the 1910s.)

In the end, though modern in its outlook, Girl Waits with Gun is thoroughly old-fashioned in form as well as setting. It tells a clear story with a beginning, middle, and end ... though the end hints broadly at sequels to come. That means spending more time in New Jersey, something I generally try to avoid, but in this case it's a welcome prospect.