Love and dating in your 30s and beyond 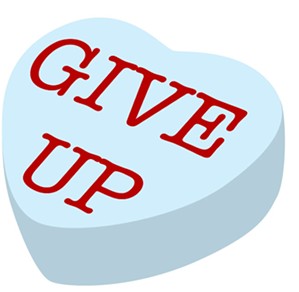 When you reach a certain age and are still unattached, saying the words "I believe in love," sounds affected and masochistic. Love is a rough deal, and if — like me — you're still dating in the third decade of your life, the following things have probably happened to you:

Your heart has been melted and then stretched into some new and interesting shapes by good people who — for whatever reason — didn't make it for the long haul.

You have also put yourself out there enough to have had the aforementioned heart trampled on by a whole smorgasbord of sociopaths and losers.

Singles of Humboldt, I suggest you give up. Not on love, just on all the things that make love such a pain in the ass.

Give up on trying to figure out why someone hasn't called you back. Give up on dating people you're not really attracted to. Give up on chasing around people you're attracted to but who aren't attracted to you. Give up on bad sex. Give up on whining. Give up on drama. Give up on squinting and tilting your head until the person you're considering looks like a viable choice. Give up on ignoring large, glaring character flaws (drug abuse, possessiveness, narcissism) because so-and-so has a job and a car and might somehow change someday if you find a way to love them enough. Give. It. Up.

The best thing about dating in your 30s (and later) is you know the score. You've seen some crap. You know what you're willing to put up with and what the real thing feels like. Real love doesn't keep track of who called whom first, require you to be completely hairless from the neck down or make you constantly afraid that you're going to screw it all up by being yourself. That's some 20s shit.

The worst thing about dating in your 30s and beyond is that you've realized the limitations of second acts. No New Year's resolution or overdue bouquet can substitute for what's missing if what's missing is character and integrity. That takes serious inner work, often with the aid of a professional. It's worth it. It's worth it because your character, integrity and emotional health determine the kind of person who's attracted to you. You want to attract better people? Be a better person. OK? OK. Now on to the lightning round.

You're not allowed to give up on love. If you're reading this, you are voluntarily accepting my guidance and I'm ordering you to go ahead and say those awful, hackneyed words: "I believe in love." Say them out loud. Make your coworkers uncomfortable. Do it.

Love is like that: It is ugly and uncomfortable and embarrassing and unfashionably sincere. It's a bright, rare flower that grows up out of the fertilizer of vulnerability and honesty and courage — the good shit. There's someone out there who needs it, your vulnerability, your honesty, your courage, your cooking, your touch, your affection, your support, your history and, yes, your soul. How fucking dare you deprive them of it because you'd rather play it cool?

If love is really what you want (and there's nothing wrong with that) take a deep breath and ask for it. Is love really what you want — this terrible, messy, scary thing? Are you really ready for all of the possibilities: rejection, reciprocation, honesty, compromise, a family phone plan, menopause, mourning and regular sex?

If the answer is yes, ask for it. Go places. Talk to people. Be awesome.

If the answer is no, give up. Bah humbug. Fine. Just don't sit there and expect some poor, patient soul to dig you out of your misery and reconstruct you into a whole person. That's work you've got to do on your own.

You can figure it out. I'm never going to give up on you.