Thick accents, wild and crazy hijinx in the holiday show 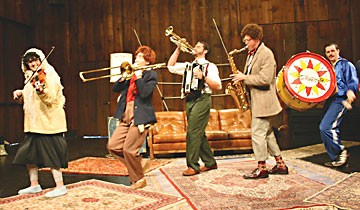 If you've ever been mooned by gypsies in the Les Halles shopping mall in Paris, as I was, you'd know how much fun they can be. In Dell'Arte's Christmas show, the Glasnost family first appears pulling a gypsy cart, which contains, among other things, the set. As the family members decorate the bare stage, they introduce themselves and explain their purpose: They're strangers in America, and they'd like to stay. So they're putting on a show.

That's about as straightforward as The Glasnost Family Holiday gets. The rest is music, storytelling (both with Christmas themes) and comic family brawls. The Glasnosts appear to have learned how Americans like their entertainment from TV reruns of 1950s variety shows, Rose Bowl Parades and 1980s music videos. The younger family members also adopt rapper poses. The result is reminiscent of everything from musical Borat and those Two Wild and Crazy Guys from the old Saturday Night Live, to an eastern European Fellini movie about a demented Lawrence Welk Christmas special.

This hour show was created by the ensemble with director Joan Schirle, plus choral director Tyler Olsen and music director Gregg Moore. The actors all create and maintain individually defined characters, and they are all musically accomplished. The comic fights are more sophisticated and acrobatic versions of the Three Stooges, suitable for children.

In this style of holiday entertainment, any subtext may be mostly in the eye of the beholder, but I especially noted those moments in which the weirdness of American customs and customary entertainments are revealed by these earnest but off-kilter outsiders, "maximizing their minimum skills." For example, the family is enthusiastic but perhaps not always clear on the appropriate effect, as when they push the rhythm of a particular Christmas song to make it sound more threatening than festive.

The ethnic stereotypes are relatively gentle, although the accents are sometimes impenetrable. The onstage narrative is more a pastiche than a story, but it all adds up to a good time, particularly for children -- though there didn't seem to be many in the opening night audience at the Carlo, that's very likely to be remedied when the show hits the road this week.

Rumor has it that there's a lot more about this ensemble elsewhere in this issue, so let's move on.

On a recent Saturday night, Jeff DeMark brought his particular brand of storytelling to an overflow crowd at Muddy's Hot Cup in Arcata. He told some new stories along with selections from his fully-formed shows, accompanied by the UKEsperience ukulele band. The combination was often magical. DeMark's stories are funny, and they seem to touch a chord with the local audience as shared experience and nostalgia. But they also penetrate with a poetic humanity, and this versatile ensemble of two ukes, electric bass and drums added to all these effects, but particularly the warmth.

Some of the stories were a little rough in presentation but the final one perfectly summed up the potential of this combination. DeMark's story about giving his mother her first marijuana high (at her request) was hilarious, backed at one point by the marching chords of Jefferson Airplane's "White Rabbit." Then the images of his mother the day after, relaxed and liberated into a youthful freedom, dancing to her favorite recording of Patsy Cline, got just the right accent from the band playing "I Fall To Pieces" as DeMark remarked that he never saw her happier than on that day.

In my previous column I noted that although the musical She Loves Me was the first show ever done at the North Coast Repertory Theatre, there is a dearth of documentation about that 1983 production. I've since heard from one of the principals.

"I was one of the leads in the NCRT premiere, directed by Roby Agnew," writes Lisa Monet of Bayside. "My husband Rick St. Charles and I had recently moved here from San Luis Obispo, where we'd been active in community theater ... During the period of rehearsals, (which took place in the remodeled Eagle House) I learned I was expecting our first child, Matt St. Charles. After that production, my musical focus turned to albums for children. We now have two children, and two national award-winning CDs, Circle Time, songs and rhymes for the very young, and Tingaleyo, a bilingual treasure trove of songs in Spanish and English, and plans for the upcoming release of four more titles."

More information can be found at www.lisamonetmusic.com. Meanwhile the current production of She Loves Me continues at NCRT in Eureka.

Also continuing is Ferndale Rep's stage version of the cult holiday film, A Christmas Story, which is celebrating its 25th anniversary.

Coming Up: The North Coast Prep production of Shakespeare's King Lear plays Wednesday through Saturday, Dec. 10-13 at 7:30 p.m. at the Gist Hall Theatre on the HSU campus in Arcata, with a Saturday matinee at 2. Tickets at Arcata Plaza Design or call 822-1670.

The annual North Coast Dance production of The Nutcracker begins on Friday, Dec. 12, at the Arkley Center in Eureka. Information at www.northcoastdance.org.