Behind the scenes at the Dell'Arte holiday show 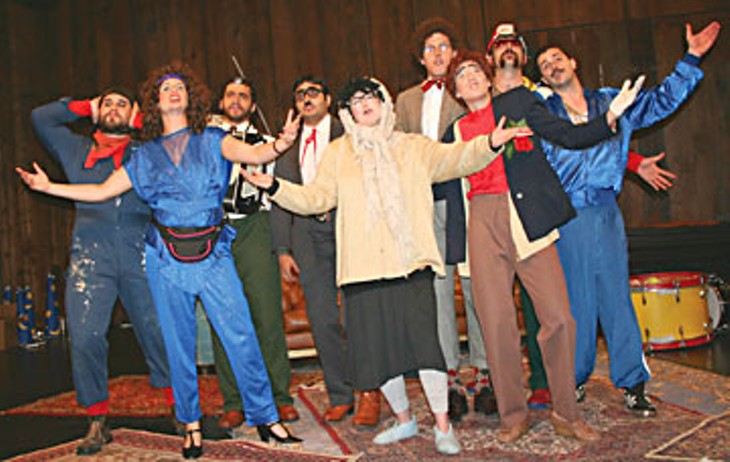 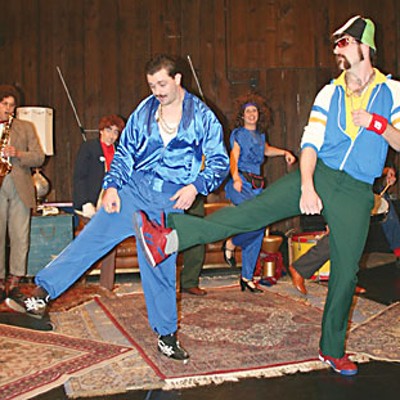 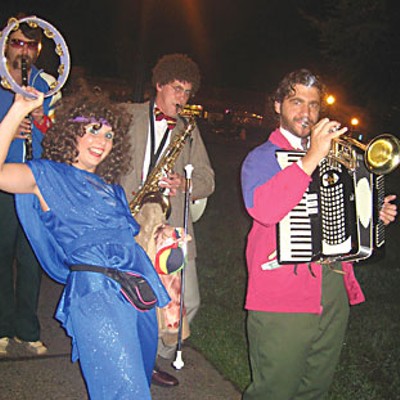 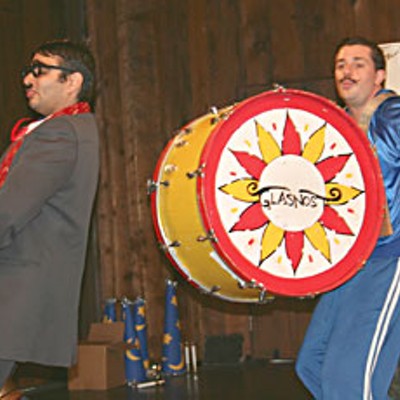 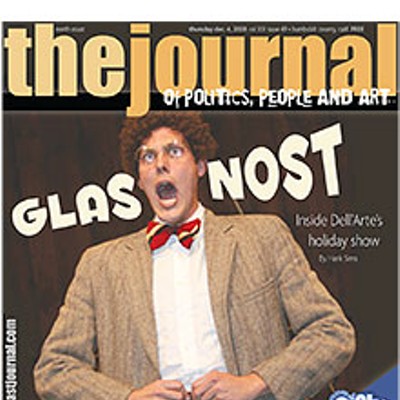 A tall man in costume runs up and down the aisles of the theater at something near full speed, blowing a saxophone in time with the brass-and-percussion chorus on stage. They're performing the raucous, upbeat finale -- "We're in the spirit. The holiday spirit!" -- and the saxophonist's impressive foot speed doesn't seem to affect his musical timing.

Cut. The kinks have been worked out of that scene, apparently, and the young actors who comprise the tuneful Glasnost family, impoverished new immigrants to this country, are ready to do a full run-through. Opening night is just a few days away, and there are still big holes in the script. And the props have malfunctioned. Stage Manager Kristin Shumaker, a staff member at Blue Lake's world-renowned Dell'Arte Company, informs the cast of the latter fact in a strangely sorrowful voice.

"Tonight, we do not have the PVC top," she says. "We'll just have to pretend as if we do." The piece of equipment in question -- victim of an experimental glue -- is meant to attach to the Glasnost couch, which apparently travels with the family on their peregrinations around the world. The failure of the glue means that the audience (just one person, apart from the crew) will miss one of the play's early visual jokes.

The run-through starts, and the actors make do without. They're just like their characters in that sense. The nine members of the Glasnost family wander the world, kicked out of one country after another. They're gypsies, or Slavs, or something ... it's not clear. They're all related to one another, but they can't keep straight exactly how. They arrive at your neighborhood in December, and set up camp. And then they introduce themselves, playing you some music in the meanwhile.

Such is the premise for Dell'Arte's 28th annual holiday show, which takes the Dell'Arte International School of Theatre's third-year students all over Humboldt County and up into Oregon, giving free family performances at schools, theaters and community centers. The show is funny and moving, the music surprisingly tight. But there's something else, something barely noticeable until the end, that peeks around the corners of the play, and of the fictional backstory of the Glasnost family. It speaks to the anxiety people are feeling this year.

It's in keeping with the reigning ethos at Dell'Arte, where the comedy is always served with a strong sense of purpose. The holiday show marks the last ensemble piece to be produced by this crop of MFA students, and when they scrub off the face paint and sit down to talk it's clear that they have absorbed the spirit of the place. Or else they had it before they arrived.

"Dell'Arte is where you go when you're looking for something different," says Matthew Walley, who came to the school from Joliet, Ill. (Walley plays Swerv, the big, bearded "baby" of the family.) The nine members of this year's graduating class come from all over -- Norway, India and Canada, in addition to various corners of the United States. One thing that connects them is an entrepreneurial drive to get out there and get their art made.

Each year, a panel of Dell'Arte eminences selects the holiday play from a list of proposals. It is always performed by the third-year students. This year, the students submitted their own proposal. It was based on a side project they have been working on for a year or so -- the Glasnost Family Band.

A tradition at the Dell'Arte school dictates that the second-year students welcome the incoming class with a performance. So when their turn to entertain rolled around, this year's class, who had various levels of musical talent, dreamed up the Glasnost band. It stuck. They started playing impromptu gigs around town, including one at the Arcata Farmers' Market. They spent a day busking guerilla-style in San Francisco, and made enough to pay for their travel expenses.

So when it came time to submit ideas for a holiday show, they proposed to structure one around the band. Dell'Arte went with the idea, and this year's holiday show director, Joan Schirle, has been working with them to develop the band's history and internal dynamics.

It turned out that the story of the band would have resonance beyond what the students could have imagined when they first devised it a year ago. Suddenly, financial insecurity is at the back of everyone's mind (if not the front). The ragtag camp the band sets up when they come to town isn't just the image of a gypsy camp -- it's the image of America's Great Depression.

But the show that the actors and crew have devised is full of abundance. Even the endless, buffoonish bickering that tears apart the orderly proceedings from time to time seems like a gift. And though the family is poor, they give more than they receive. ("We're a street band," says actor Liza Bielby, a native of Marquette, Mich., emphatically. Their shows are free.)

The show comes to a head around a monologue delivered by the beloved grandmother of the family (who is played by the youngest actor, Norah Sadava). She tells the story of a time the family had no food, and the event that allowed them to have a (meager) holiday feast. It's the spirit of the show, and of the season, this year especially: Food. Miracles. Family. Hijinx ensue, and close the show, but the quiet moment lingers.

When next semester starts, the students will be working in small groups with community groups, such as the Raven Project, a nonprofit that serves homeless teenagers. They'll develop theater pieces to help these groups with their work. After that, they'll be off on their own again. Deepal Doshi plans to return to his native Bombay, there to continue the political theater work he had done before he came to Dell'Arte. Ida Fugli will return to Norway, and she'll be bringing her classmate Jamie Van Camp along with her. They want to start a physical theater program in one of that country's magnet schools for the arts. Other students say they're not sure what their next step will be. But they all have fire in their eyes.

Go see the show. Take your kids. You won't be sorry.