The only proven method for curbing population growth is to eradicate extreme poverty and give people better lives, including education and contraceptives.

Quick quiz to get us started. There are 2 billion children under 16 alive today. According to the United Nations, how many under-16-year-olds will be alive in the year 2100? Pick one: (a) 2 billion; (b) 3 billion; (c) 4 billion. Does it help if I tell you that only 10 percent of people answer correctly? (I sure didn't.) Or you can cheat and look at the accompanying graph.

Before I get to the answer, let's consider the global population in general. At the time of "Our Worst Mistake" (Field Notes, April 4), when agriculture was invented roughly 10,000 years ago, about 5 million people lived on the planet. Fast forward to our second big jump, the Industrial Revolution: In 1800, there were about 1 billion of us. Today, it's nearly 8 billion. In 2100, it'll be 10-12 billion. 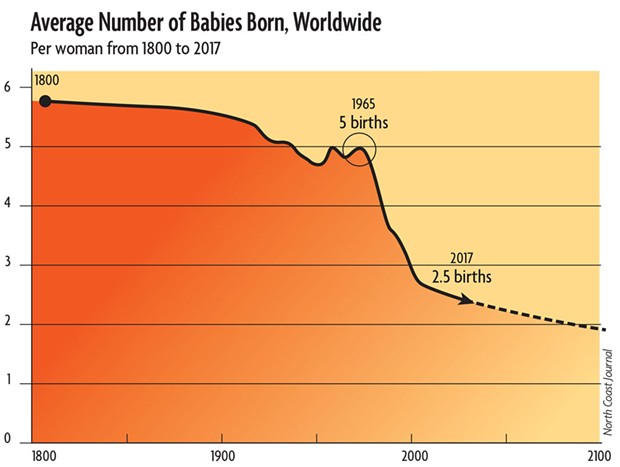 Here's the surprising fact that 90 percent of us get wrong: The number of children will remain about the same, at 2 billion. According to the United Nations Population Division, the correct answer to the question above is (a). It'll be adults who make up the vast bulk of the increase. At this point, if you picked (b) or (c), you're supposed to be saying, "But women in developing countries have huge families, so the number of kids in the world has got to increase, amirite?"

You would have been right 70 years ago. After World War II, women were, on average, having five babies apiece, for obvious reasons: In most parts of the world, only half of kids survived to age 5. Several factors have combined to bring the birth rate down dramatically.

Thanks to vaccination, sanitation and clean water, less than 4 percent of children die before their fifth birthday worldwide. (In 1800, it was 44 percent).

Global rates of extreme poverty (per the UN definition) are plummeting, from 50 percent in 1966 to 9 percent today.

Education, in particular that of girls, has soared. Today, 90 percent of girls and 92 percent of boys of primary school age attend school.

The wide availability of contraception means that parents can choose to limit how many children they have, while still enjoying sex.

The net result is that the average number of babies worldwide has plummeted from five in 1965 to half that today. It's true that in the poorest 10 percent of the world's population (places like Somalia, Niger and Chad) women still have an average of five babies, but in the rest of the world — including Mexico, India, Bangladesh and Indonesia — couples are having two children on average.

The bottom line is this: If you are concerned about the exponential growth of the number of humans on this planet, you'll support every effort to improve the lives of the 1 billion people still living in extreme poverty. Key factors to accomplish this include girls' education and women's rights, good nutrition, availability of contraception, vaccination and healthcare, clean water and sanitation and microloans. And peace. Don't forget peace.

Take another look at the graph showing that astonishing decline in birth rates. If that doesn't give you hope for the planet, nothing will.

Barry Evans (barryevans9@yahoo.com) believes things are bad, but that many of them are getting better.