Go On Sing It 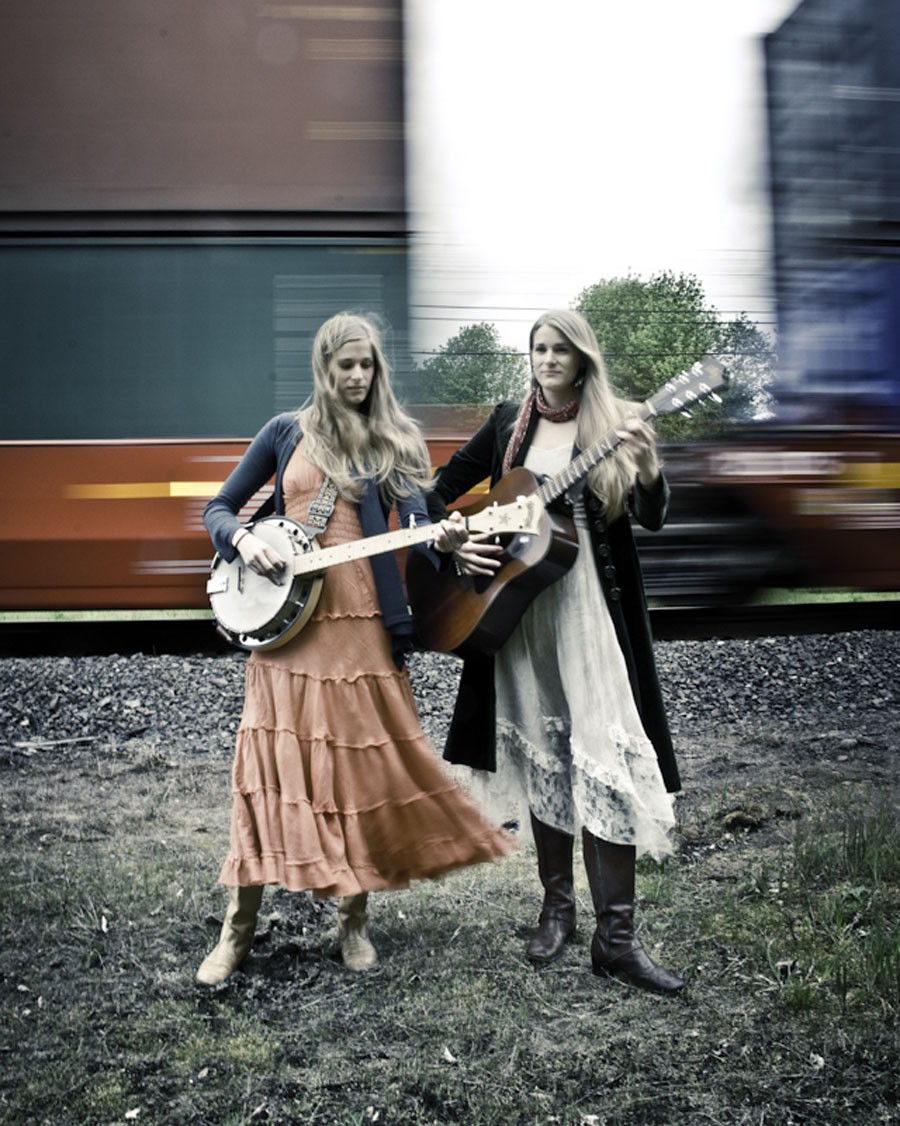 The scene at the Arcata Playhouse was electric. The Bucky Walters had just finished a rollicking set and their friends from Portland, The Shook Twins, were ready to close the show. Not that The Buckys had all left the stage -- they hung out to play along -- and more friends from PDX and elsewhere filled the dance floor. At some point identical twins Laurie and Katelyn Shook began strumming one of their newer songs, a crowd favorite called "Toll Free."

"I sure love my friends. And I'm happiest with them. Smile lines in fashion, fears to ashes. Front porch laughin', music happens. Yeah, freedom takes no toll. So go on, sing it ‘til we're old."

The Twins started singing when they were young. "We've been singing forever, in school choirs at first, but we didn't learn to play instruments until we graduated high school," said Katelyn in a call from Portland. "We started playing guitars when we were like 18, but didn't really do anything serious with it until after college. Then we just started playing music. That was it."

Growing up, high school and college were all in and around Idaho. Post-grad they moved in with their parents ("because they're awesome") and formed a band with a couple of guys. "We all lived at our parents' for years -- it was like a hippie commune -- it was wonderful," Katelyn recalled happily.

In 2009 the girls moved to Portland to pursue musical dreams. Bass played Kylee Volkman joined the combo last spring. Other friends sometimes sit in. "We're definitely open to collaboration and letting the songs become what they are in the moment," said Katelyn, with an enthusiasm that just bubbles. "It always turns out fun."

The songs, with lyrics mostly by Katelyn and melodies mostly by Laurie, veer from gently political ("Eye to the Polls" for example) to surreal tales like "Time to Swim," the opener on the Shook's Window album. It tells of a very rainy day in Portland that finds them on an underwater shopping trip to town. Laurie's looped banjo weaves an intricate pattern with Katelyn chiming in on a toy glockenspiel, while their voices harmonize in something like a round. The overall effect is simply stunning.

"Toll Free" came later. "We were inspired to write it after we first connected with The Bucky Walters and Bryan [Osper] at the Oregon Country Fair," said Katelyn. "It's about being on the road, playing music. The chorus, ‘Freedom takes no toll,' is about being gypsies, successful gypsies."

Bryan joined in on mandolin when the Twins last played the song at the Playhouse; when friends gathered for a memorial after he was lost in an auto accident, the Twins were there for another heart-wrenching take on the tune, full of joy. It was a healing moment.

"There's certain music that's just for partying, but I'd like to think that our music and our energy does more," said Katelyn. "When we really connect with the audience and have one of those real circle moments, we may not flat out say it, but it's our way of changing the world. The energy of people experiencing something together -- joy and love -- putting that into the world at that moment has to help. We like to think it does anyway. The whole notion of being positive in one moment and connecting with people, I think that does something."

Last year's Shook Twins tour paired them with their friend John Craigie, a raconteur/songwriter whose funny between songs patter is as entertaining as his songs. He's on the road with them again for what they call the "He Said She Said Folk Tour." "We've been touring with him like every six months for a couple of years. He's an awesome guy, a great storyteller and really fun," said Katelyn. I would have to concur on all points.

The Shook Twins and John Craigie return to the Arcata Playhouse on Thursday, Feb. 24. Doors open at 7 p.m. showtime is 8, with Humboldt's own Lonesome Roses opening. Tickets are $12, $10 in advance at Wildwood Music or The Works. More info at 822-1575.