by Charlie Myers and Ryan Burns 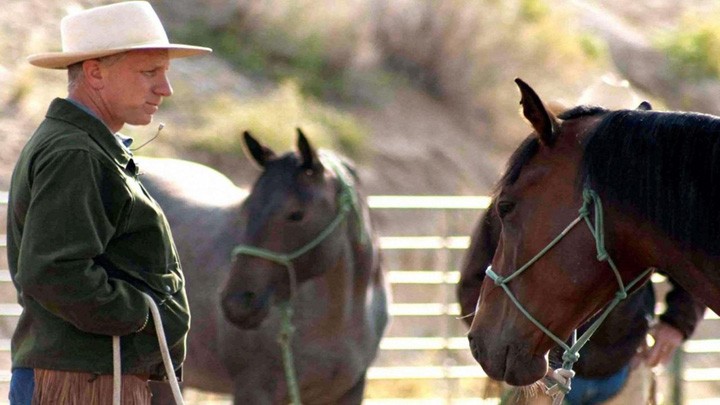 BUCK. This gorgeous documentary, which profiles a sage-like Montana horse trainer named Buck Brannaman, comes cantering into the Minor Theatre Friday, just in time to alleviate your summer blockbuster fatigue. My wife and I caught Buck in Santa Rosa a few weeks back; I urge fellow movie lovers to reward Coming Attractions Theatres -- and yourselves -- by purchasing tickets to this little gem.

Director Cindy Meehl follows Brannaman as he travels across the country putting on four-day horse clinics. It's inside the arena that the mild-mannered cowboy sets onlookers' jaws to dropping. "Rather than helping people with horse problems," he says, "I'm helping horses with people problems." And indeed he seems to communicate telepathically with the the large animals, calming nervous broncs and fillies with little more than eye contact and body language. (Brannaman was the inspiration for Nicholas Evans' novel The Horse Whisperer, and Robert Redford, who directed the movie version, appears in Buck.) The historic practice of "breaking" horses, Brannaman argues, is both cruel and wrongheaded -- there's some heartbreaking archival footage to hammer the point home.

Brannaman knows plenty about wrongheaded cruelty. His father was an abusive tyrant who forced Buck and his older brother to perform trick roping. Their act was popular at fairs and rodeos and even landed them a spot in a Sugar Pops commercial. But it was built on fear. Brannaman was eventually rescued by an observant high school coach, and with the help of his foster mom and a cowboy mentor he learned to channel his childhood trauma through his love for horses, becoming more than a mere trainer.

Brannaman's stoic composure breaks just once in the film -- during a harrowing sequence toward the end in which he encounters a brain-damaged stallion who, through neglect and mistreatment, has become, in his estimation, a predator. "The horse didn't fail us," he angrily lectures its owner. "We failed him." Even if you're not a horse person -- or a horse, for that matter -- Buck inspires respect and admiration. PG. 88m. At the Minor.

CRAZY, STUPID, LOVE. I knew almost nothing about this film when I went to see it, as if the studio just slipped it into distribution in the middle of the summer blockbusters. But there have been a few surprises this season amidst the normal dismal fare and, happily, Crazy, Stupid, Love is a modest one.

This romantic comedy with a dollop of bromance has a solid script, some very good acting and a few genuine surprises in its narrative. A particular delight was the unknown (to me) Analeigh Tipton (whose scant film credits include Green Hornet and an episode of The Big Bang Theory), a former pairs figure skating competitor who stands out as the babysitter Jessica.

The narrative setup is not particularly unusual. At a restaurant, Cal Weaver's (Steve Carrell) wife Emily (Julianne Moore) tells him she has been sleeping with co-worker David Lindhagen (Kevin Bacon) and wants a divorce. So suddenly, Cal's "perfect" life comes crashing down.

Having married at 17 and slept with only one woman, he is ill-equipped for the current dating game, plus he dresses atrociously. To the rescue comes the experienced and confident Jacob Palmer (an urbanely cocky Ryan Gosling) who takes pity on Cal and offers to teach him the dating ropes after a wardrobe makeover (the bromance strand).

Complications ensue: 17-year-old Jessica (Tipton in a memorable performance), who babysits for Cal and Emily's two children, is in love with Cal while 13-year-old son Robbie (Josh Robo) thinks Jessica is his soul mate. Meanwhile, Jacob becomes seriously involved with law school graduate Hannah (a wonderful Emma Stone, Easy A; Friends with Benefits) and seems ready to abandon his one-night-stand lifestyle. Okay, in regard to the main plot line, viewers will know that Cal and Emily have made a mistake and need to find each other again. But in getting there, the script has some clever surprises.

Crazy, Stupid, Love will no doubt get lost in the company of Cowboys and Aliens and Captain America, but the film will reward the viewer who seeks more interesting material and better acting. PG-13. 118m. At the Broadway, Mill Creek and Fortuna.

COWBOYS & ALIENS. Despite having watched the trailers for this film many times, I was still unsure how Cowboys & Aliens intended to marry its two genres. As it turns out, the film is at heart a tongue-in-cheek send-up of both genres, particularly the Western. In fact, the first part of the film is almost exclusively a catalog of every Western cliché and character type you know and love if you are a fan of the genre. It also borrows substantially from the plot of the 1950s classic Shane, which starred Alan Ladd as the mysterious stranger who rides into town one day, saves the ranchers, and rides back out again.

Here, the Shane character Jake Lonergan is played by the much better actor Daniel Craig. When we first see Jake, he wakes up alone with no memory of who he is and with a strange metal band around one wrist. But he soon establishes his bona fides by making short work out of three riders who threaten him and wanders into town only to learn he is a wanted man.

Then the aliens attack, kidnapping some of the townsfolk, and Jake and his bracelet are called to duty. Fortunately, he has the help of the equally mysterious Ella Swenson (Olivia Wilde), whose prairie outfit with a gun strapped around it provides a running visual joke, tyrannical cattleman Woodrow Dolarhyde (Harrison Ford in typical grump mode), and Sherriff John Taggart (Keith Carradine).

Unfortunately, the script, by Roberto Orci, Alex Kurtzman and others from a graphic novel, is mediocre at its best and just silly otherwise. And, for this viewer at least, the humor became repetitive and forced. In fact, the whole film seemed designed to give savvy genre viewers constant chances to congratulate themselves on recognizing the film's genre references. Surely, the film could have been more imaginative in its genre mixing.

Wilde, unhappily, is given only limited range for her character, but she does have a memorable moment. When Cal needs to stop thinking to remove the bracelet, he is unable to until Ella leans over and gives him a lingering kiss. Works for me. PG-13. 118m. At the Broadway, Mill Creek, Minor and Fortuna.

RISE OF THE PLANET OF THE APES. While messing around with science, a genetic engineer (James Franco can do anything!) makes gorillas too smart for our own good. I tell ya, if we're not careful these knuckle-draggers are gonna deface the Statue of Liberty. Not a sequel to the 2001 remake; this is a re-imagined origin story. PG-13. 110m. At the Broadway, Mill Creek, Minor and Fortuna.

THE CHANGE-UP. A married father (Jason Bateman) and his playboy pal (Ryan Reynolds) magically swap bodies after urinating simultaneously into a fountain. This, according to IMDb.com, leads to "a series of wildly complex difficulties." Might these difficulties prove hilarious? R. 113m. At the Broadway, Mill Creek and Fortuna.

FRIENDS WITH BENEFITS. "Friends" Justin Timberlake and Mila Kunis have sexual intercourse. Or their characters do. R 110m. At the Broadway, Mill Creek and Garberville.

HARRY POTTER AND THE DEATHLY HALLOWS: PART 2. The boy-wizard becomes a man-wizard in the final installment. PG-13. At the Broadway and Mill Creek.

THE SMURFS. We couldn't get anyone on staff interested in reviewing this movie. But it's about Smurfs, if you're wondering. PG. 102m. At the Broadway, Mill Creek and Fortuna.