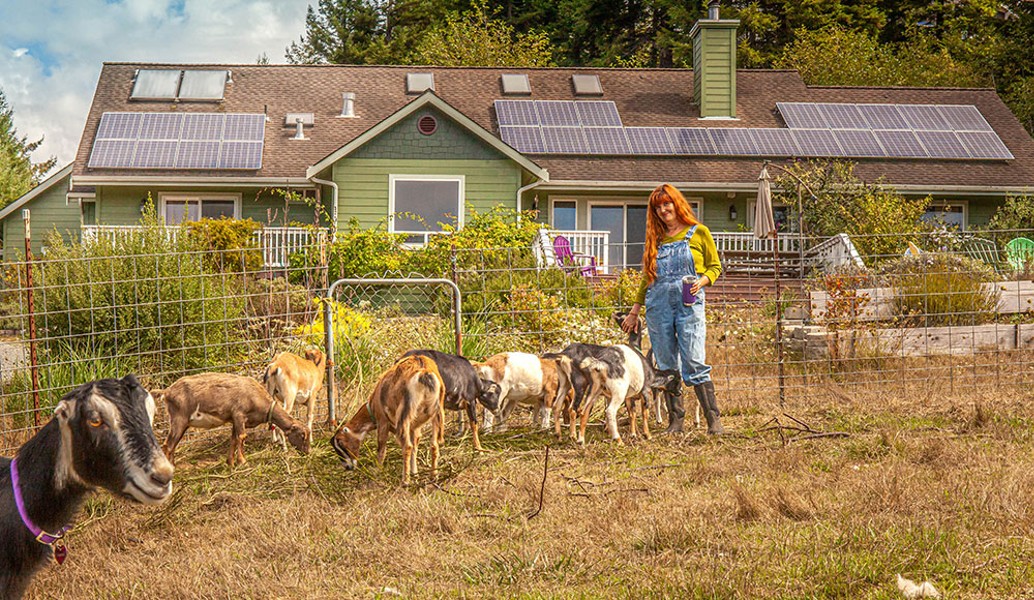 Photo by Alan Workman Karin Eide at the farm, in front of the solar-powered cheese-making facility.

Photo by Alan Workman Chef Olivia at the Friday Night Market picking up her fresh cheese order from Eide for The Carter House's Restaurant 301.

Somehow, lavender is not the first scent you expect on a goat farm. But Karin Eide, owner and operator of Spring Hill Farmstead Goat Cheese in Bayside, is probably not what you imagine when you think of goat farmers, either. With a mane of fiery red hair, a love of bright colors and seemingly-endless tolerance for the amount of red tape involved in commercial cheese-making in California, she definitely makes for a fun and informative host when one visits her farm.

A self-described "little hippie chick" in her youth, Eide headed to Humboldt after high school to study art and business at College of the Redwoods — a yin-yang balancing act that followed her for many years. Her relationship with CR was short-lived, and at 25 she followed her paternal genes to Norway, where the farming dreams began. But rather than marrying a Norwegian farmer and living on a fjord, she studied traditional weaving and co-ran creative textile studio Free Fantasy.

At 30, Eide returned to the U.S., took a trip to Reggae on the River and decided Humboldt was going to be home. In short order, she started work as a bookkeeper at Aalfs, Evans & Co, gave birth to a daughter and started keeping horses. But the agricultural lifestyle continued to beckon and, 18 years later, she acquired the land in Bayside she'd been renting for the horses (originally a dairy farm). When the sale was in escrow, Eide idly said to her father, "Hey – I should get goats and make cheese!" He reminded her she would have to milk them twice a day, to which her response was "Ewww, I don't want to do that!" But a year later she was milking a La Mancha goat and making cheese.

In the early days, the goats were milked outdoors under a beach umbrella before graduating to a small shed. For a few more years, Karin continued with her day job as she expanded her herd and learned the craft of cheesemaking. But at the age of 57, she decided enough was enough and she needed to be a full-time goat farmer and cheesemaker. After a year of construction, certification and courses at the North Coast Small Business Development Center, Spring Hill Goat Farmstead Cheese LLC was born on April 1, 2017.

Today Karin maintains a herd of around 30 goats, affectionately known as the La Mancha Ladies, who all have Mexican names in honor of her mother; the herd size is, she feels, about right for the six fields of organic native grasses she rotates them through. Nature's food is supplemented by alfalfa twice a day, plus custom grain and mineral mixes, all organic. The goats are milked daily, two at a time, which takes two to three hours, depending on the goats' moods — as Eide notes, "There is no such thing as an average goat." The herd is guarded around the clock against roaming wildlife (mountain lions, foxes, coyotes and the like) by Opal and Jade, two gentle giant livestock protection dogs who are assisted enthusiastically by border collie Ruby. Three barn cats, Scout, Benny and Monster Kitty, are responsible for rodent control and visitor entertainment.

The human team consists of Eide, her right-hand man Alan Workman, a small number of interns, several housemates, maintenance man Marvin Rishoff and a local network of helpers and farm sitters to help out when things get super-busy. The farm makes extensive use of the WWOOF (World Wide Opportunities on Organic Farms) educational and cultural exchange for volunteer help — that's Eide and her goats right there on the WWOOF USA homepage. The next group of WWOOFers, arriving in September, will tackle fence maintenance, brush control and helping with the endless (and expensive) paperwork and testing that have to be completed to stay in compliance with the five different licenses for the different processes involved in milking and cheesemaking. They'll also get to do some fun stuff like leading goat walks for visitors. (Hit Eide up on the Spring Hill Facebook page and go. Goat walks are fun.)

This is where the lavender and other plants in the herb/flower garden come in. The Blanca (plain chèvre) is at the heart of the fresh cheeses, and every week you'll also find at least two sweet (usually with honey and/or berries) and savory at the farmers market – often named after individual goats. One of the savories is usally Pepita, a blend of market peppers, herbs and spices. Then there's feta, Mexican cheddar, whole-milk ricotta and the delightful heart-shaped, pepper-coated Besos and Besitos.

Once in a while you'll also find Karin's very tasty drunken goat cheese at the market — fresh cheese wrapped in fig leaves that have been macerated in local red wine for six months, then aged for another two weeks. Watch out for a golden curd cheese with turmeric and ginger, as well as blue and/or stinky cheeses next year. All the cheeses are made using a thistle-based rennet, so everything is vegetarian.

Sauté diced seasonal vegetables with feta cubes, remove from the heat and mix with ricotta, then stuff the mixture into pasta shells. Place stuffed shells in a baking dish, add your favorite pasta sauce and top with grated Mexican cheddar. Bake at 375 F until browned and bubbly on top.

Spread the Blanca on good bread and top with cucumber and smoked salmon as Eide does, or put it on pancakes for breakfast and top with fresh fruit.

Eide keeps a jar of feta cubes in olive oil by the stove and tosses a few cubes into quesadillas.