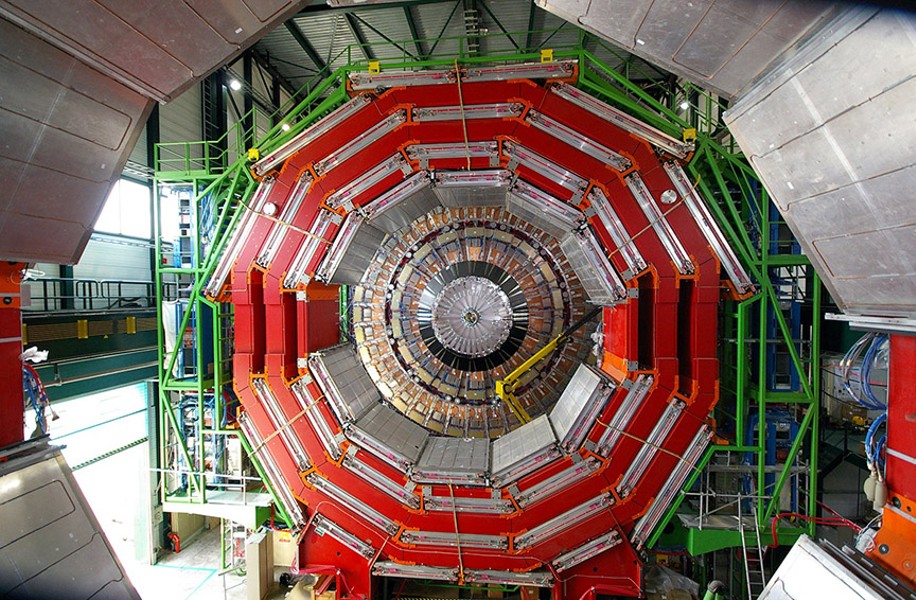 european council for nuclear research. The Large Hadron Collider's Compact Muon Solenoid under construction in 2005. The 50-foot-diameter, 12,500-ton detector was key to the discovery of the Higgs Particle in 2012.

Just a month ago, the Royal Swedish Academy of Sciences announced that this year's Nobel Prize for Physics would go to two of the original six researchers who proposed the existence of the so-called "Higgs particle" in 1964. The Higgs is named after Scotsman Peter Higgs, one of the two laureates, the other being the Belgian François Englert. Last year, the Higgs was created and detected at the Large Hadron Collider (LHC) in Europe.

What is the Higgs? Technically, it's a boson: an elementary particle that carries a force. More prosaically, the Higgs particle is the face of the Higgs field, which you can think of as an omnipresent "glue" that gives other particles mass. Without the field, particles would zip around the universe at the speed of light. No you and me, no smell of fresh coffee, color of a rose, wind in your hair or Twitter. No nothing. In trying to explain just what the Higgs is, and why it matters, the New York Times' science correspondent Dennis Overbye hit the metaphor on the head in these politically-charged times. He wrote: "According to this model, the universe brims with energy that acts like a cosmic molasses, imbuing the particles that move through it with mass, the way a bill moving through Congress attracts riders and amendments, becoming more and more ponderous and controversial."

So why did it take nearly 50 years after being predicted for the Higgs to be actually found? Because it's "rarely seen" (maybe one in a trillion particle collisions contains a Higgs boson) and it's heavy, as elementary particles go (130 times the mass of the proton, for instance). Such a massive particle can only be detected by a very high-energy machine. In fact, it took the world's most powerful particle collider, the LHC, two years to find the Higgs. The LHC was constructed in a deep tunnel, 17 miles in circumference, straddling the Swiss-French border outside Geneva.

The announcement of the discovery was something of an anticlimax, since it fit the theoretical model perfectly, essentially completing the "Standard Model" of particle physics. Much more exciting, from the point of view of physicists, would have been not finding the Higgs, or finding it lighter or heavier than predicted. The discovery, pessimistically speaking, may be the last gasp of particle physics. Physicist and Nobel laureate Steven Weinberg wrote some years ago, "My nightmare ... is that the LHC discovers the Higgs boson and nothing else."

Weinberg's fear may be prescient. Far from being the "God Particle" described in the popular book of that name co-written by physicist Leon Lederman in 1993, the Higgs may turn out to match Lederman's alternative moniker, the "Goddamn Particle" (reflecting the cost and effort it took to find it). Now that it's been found, the Standard Model looks rock-solid as the "theory of almost everything." It's the "almost" that's the problem, since discovery of the Higgs gets us no closer to incorporating gravity into the theory, and we're as far away as ever from finding a universal Theory of Everything. Absent gravity, the Standard Model is, in physicist Michio Kaku's words, "a theory only a mother could love."

It's the opposite of the problem that great Danish physicist Neils Bohr faced many years ago when nothing seemed to fit. Far from being despondent, he enthused, "How wonderful that we have met with a paradox! Now we have some hope of making progress."

Barry Evans (barryevans9@yahoo.com) would settle for a Theory of Anything.