Yo Tango! battling bands and lots of jazz 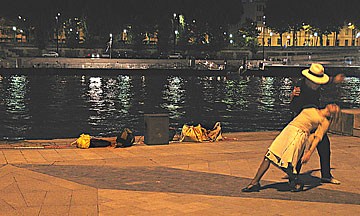 The note from Lisa B was straight to the point: "Performing at Jambalaya in Arcata on Thursday, April 17, is Yo Tango!, Humboldt's new Tango band, from 7-9 p.m. $5 cover. Come dance the Tango or just enjoy the music."

Being a tango fan, I was intrigued. I actually learned to tango, a little bit, when I took social dance in college long ago. Discovering Argentine master Astor Piazzolla and his oft-times brutal tango nuevo revived my interest as a listener. What cemented my love for the dance was a summer eve in Paris, when my wife and I came across a small group of tango dancers doing dips and turns to music from a boom-box in a small amphitheater along the Seine.

I knew there was a Humboldt tango scene, but not that a local band playing the form. I wrote back to Lisa asking for details.

What I got was a long letter from Bruce Marrs, the Dellartisan maskmaker who served as a movement consultant when they remade Godzilla 10 years back. (He even played one of the frightening baby Zillas.) It seems Marrs has been teaching acro-tango (acrobatic tango) at Dell'Arte for 15 years.

"We basically bastardize the style to turn it into a dramatic physical narrative style," he explained, adding, "It became evident that I would need to become a better tango dancer. About the time of that realization, an Argentine tango band from San Francisco came up to play: Tango No. 9. We were all knocked out."

I saw the band play too, and was equally impressed by the dancers who showed up and showed off. Marrs went on with a history of the local tango world: visits from Argentine experts, Stephan and Becky Fisher teaching classes, all leading to formation of the Humboldt Tango Club. (Bruce gives a shout-out to Lee and Jackie Turner for club work.) Meanwhile Marrs and dance partner Leslie Odleberg were choreographing tangos and performing here and there (at the Arcata Playhouse, for example). At this point Leslie and her husband, Allen, are teaching beginning and intermediate tango in Arcata on Fridays; The Humboldt Tango Club teaches three levels in Eureka on Sundays.

"At one of Humboldt Tango Club's milongas[dances], a local accordion player, Guy Smith, and a violinist, Sara Borok, played a few tangos," said Bruce. "My wife, Anna Marrs, is a violinist and asked Guy if she could get together with him to work on a few tangos. Sara, Guy and Anna met at our house and tried to rope me into playing piano with them as they worked on songs to play at a club dance. All my life I have had a choice between dance and music, and have chosen dance. At this time of my life, late 50s, it seemed fun to go with the music. There was no piano at the place we would be playing, so I grabbed a guitar." Guy's Mostly Tango Band was born, later to change names when Guy left the band for family reasons. Lorna Brown(aka Madame de Squeeze) stepped in and Yo Tango!was born. Their repertoire ranges from old traditional tangos to nuevo,whatever has the proper beat. Marrs quotes the Argentine Patron Saint of Tango, Carlos Gardel, who said, "Tango is sad music you can dance to." The club's goal is to get non-dancers to come out, "and to not be put off by the very good dancers in the community, but to get up, let their bodies listen to the music and move with the feel of it. Or, if they just want to come, have a beverage, make goo-goo eyes, sigh romantically and just listen, we will play for you, just you." And they'll be playing those tangos for you at the Jambalaya the third Thursday in each month, starting this Thursday, April 17.

Later that night, same club, it's the KRFH Battle of the Bands 2008, with battlers including comedic rockers Anslinger, melodic pop band Dreamgoats, country/surf band Svelte Velvet (all from Arcata), Shay's Rebellion from McKinleyville and Sour Cream, the Eureka kids you hear every Arts Alive! playing Cream, Hendrix and Doors songs in the alley behind Bon Boniere. As noted last week, winners get cash money ($300 for 1st, $200 for 2nd) and get a slot at SLAM-fest, on April 27, at HSU. The bummer about Thursday's show is that many (if not most) KRFH staffers are under 21, and thus will not be able to attend.

It's a good week for jazz. The Redwood Jazz Alliance is at it again with a show Tuesday evening at the Morris Graves Museum*with*theDavid Berkman Trio.Pianist Berkman is bringing his usual rhythm section — Ed Howard on bass and Ted Poor on drums. "We'll do some of my music, some standards, some free music, the whole range of piano trio jazz," he said, calling from his home in New York City. And as usual with RJA, he's scheduled to lead a clinic the following day — not a stretch for Berkman, who is the author of The Jazz Musician's Guide to Creative Practicing. At 49, he sees himself moving from the role of learner to mentor, a tradition he sees as paramount in jazz. "It's an important thing to preserve so that jazz doesn't become this desiccated academic discipline where you take your jazz classes the same way you take counterpoint or some classical theory exercise," he opined.

For a slightly different take on jazz, catch Das Vibenbass later on Tuesday at the Red Fox. As you might guess, the Seattle quartet includes vibes and bass, but also sax and drums.

HSU's Music Department has declared this "Jazz Weekend" with two shows in Fulkerson Recital Hall: Friday it's three jazz combos, two quartets and a trio (named for the days they have class) playing various strains of modern jazz. Saturday the HSU Jazz Orchestra offers a program with a Latin twist and a Piazolla tune.

Then on Sunday afternoon at the Graves, it's the monthly Open Jazz Jam, this time led by bassist Shao Way Wu and The Inkling Quartet.

Jonesing for some gypsy-jazz? Hop on your bike and wheel over to the Arcata Veterans Hall Friday where The Absynth Quintetplays for a Green Wheels Gala.

Jazz or jam? You decide. Jazzy electro jammers Lotus play Friday at the Red Fox with special guests Gram Rabbit, a darkish band from Joshua Tree with an electric bagpipe player. They describe their sound as "other."

They're calling Saturday's jam-a-thon at Portuguese Hall "Countdown to 4/20," which says something about the crowd they're trying to attract. The band dubbed the Avalon Allstars is a changeable collection of jammers. This edition includes Ike Willisfrom the Mothers and Will Bernardfrom TJ Kirk, etc., both on guitars, Chip Rolandfrom Zero, etc., on organ, Robin Sylvesterfrom Ratdog on bass, and Alan Hertzfrom KVHW, Garaj Mahal, etc., on drums.

Around the corner at the Jambalaya that night it's the return of The Rubberneckers, who apparently did not actually play their "last show ever" as promised. The always-dynamic Dynamite Sweateropens. (Advance tix recommended.)

How about the polar opposite of all of the above: Saturday at Arkley Center barbershop vocalists The Humboldt Harmonaireshave their spring show withSoCal quartet Hi-Fidelityup for the occasion.

Sunday is April 20, aka 4/20. Down at the Mateel they have the Humboldt 420 Blowout, areggae blast with Jamaican dancehall star Fantan Mojaha, plus locals Jah Sun, Elhadji, Ras Indio and the Demolition Squad.

Also on the reggae front you have Dezarie from St. Croix playing Tuesday at Six Rivers. And, this coming Wednesday' Reggae Night at the Jam goes live with Outpost, a reggae/hip hop/funk outfit from Portland. (Yes, Portland.)

Returning to Sunday and 4/20: If stringy jams are your thing, check Greensky Bluegrass, who are coming all the way from Kalamazoo to play at the Red Fox.

And at the Van Duzer, all the way from Ireland, it's the stellar Celtic quintet Solas with Deirdre Scanlan handling lead vocals. (Don't expect any 4/20 anthems there.)

As her record company tells it, Cleveland-born Colleen Duffy "created Devil Doll one late, smoky evening, many blue moons ago, with the mission of putting sex back into rock and roll. Deciding that the world of music had not heard the truth since Joan Jett and Johnny Cash and hadn't blushed since Mae West, she grabbed her bass, a microphone, and hit 'record.'" What she played was her own take on rockabilly with a punky twist. Now living in L.A. she has a new album just out, The Return of Eve, and a pair of local gigs coming up: Sunday she's at the Pearl, Monday at the Jambalaya.

The two Associated Students shows this week have been sold out for weeks. (Don't say I didn't warn you.) Canadian alt. folk-rockstars the Quin sisters, Tegan and Sara (identical twins), play Saturday in the Kate Buchanan Room. Monday it's Death Cab For Cutie at the Van Duzer, with fellow Seattle residents The Cave Singers opening. Death Cab, on the verge of releasing a new disc, Narrow Stairs, played an unusual gig in Seattle last Friday, sharing the stage with Dave Matthews and His Holiness the Dalai Lama, who was interviewed by Matthews about music and compassion among other things. Let's hear it for compassion.