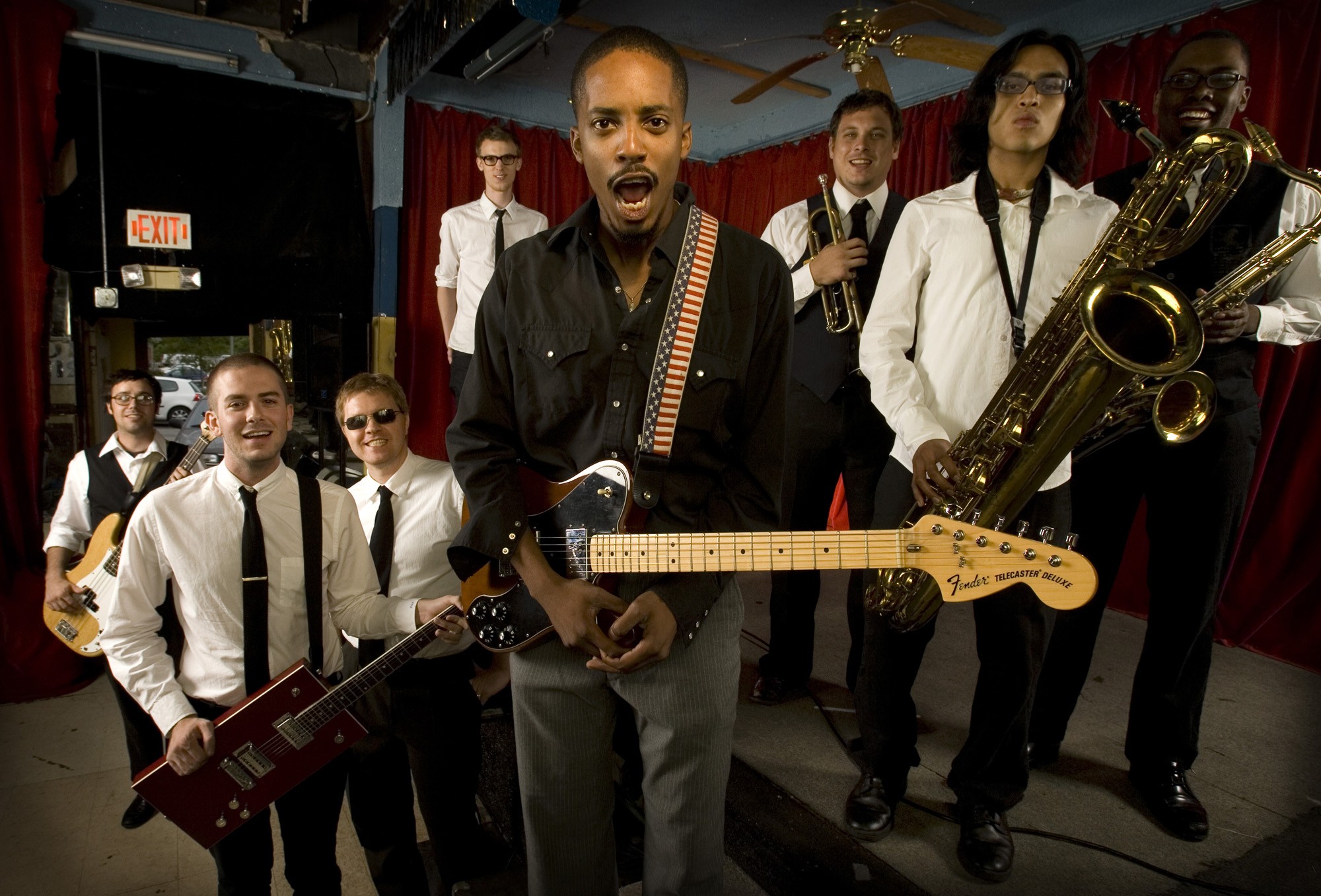 It's a classic scenario that pretty much ignores the new digital paradigm in the music biz. The red hot band from Austin has a new record out and is marking the occasion by barnstorming its way around the country in a crowded van: Texas to Colorado, through Utah up to Idaho, over to the coast for gigs in Seattle and Portland, a stop in Arcata on the way to Frisco. From there it gets a bit more 21st century. Next weekend Black Joe Lewis and The Honeybears join a whole lot of other bands, big names and rising stars alike, at The Coachella Valley Music and Arts Festival, better known as simply Coachella. For bands like The Honeybears, the massive gathering in the desert outside of Indio is a shot at the big time, or at least a jump in recognition.

As Lewis notes in his website bio, "We've grown a lot as a band, and so has our fan base. Hopefully it's still going up, but it will ultimately be what we make of it. As the shows get bigger and we get bigger, we have to keep improving to meet the demand. If we can't do that, it won't go anywhere."

Scandalous, the new album on Lost Highway, is a fine calling card for Black Joe's neo-retro Texas rhythm and blues sound, launching with "Livin' in the Jungle," a full throttle blast with soulful Memphis-esque horns driven by chicken-scratch guitar, all in the service of Joe's serrated vocals and guitar. "People call us a soul band, but we're more of a rock 'n' roll band," says Joe, almost complaining. That was clear when I caught the band live at The Depot awhile back: The blues and soul are ever-present, but shot through with punk energy and a taste of funkadelia. Good stuff. Catch them at Humboldt Brews Monday night, and be prepared to sweat. Don't come too late. Another Austin band opens: former local Mario Matteoli's latest, The Preservation, playing "cosmic American music."

That's not the only band stopping here on the long road to Coachella. Black Joe's competition across town that night is the massively successful Animal Collective, whose Monday show was moved from HSU to the Arcata Community Center. (More on A.C. in the Calendar section; they also play the Mateel Tuesday.)

Then there's the Sunday show at the Arcata Community Center with alt. folk combo Bright Eyes, founded by and featuring songwriter/guitarist Conor Oberst with Nate Walcott on trumpet and keys, Mike Mogis on various other instruments. Oberst's rise out of the Omaha music scene is an indie success story. In the '90s, he and his brother Justin founded their own label, Saddle Creek Records, releasing plaintive Bright Eyes records, then expanding and getting distro from Sony. When Obama was running for prez, Bright Eyes toured with Springsteen and R.E.M. on the Vote for Change tour and Oberst shared the stage in duets with Bruce and Neil Young. Oberst and Mogis are also part of Monsters of Folk, an alt. supergroup with Jim James from My Morning Jacket and M. Ward from She & Him. A glance at the news page on the Bright Eyes site shows where they're at now: The band played Letterman in February, NPR streamed their set from SxSW, and all the other shows on the way to Coachella are sold out. Somehow I doubt they'll play Arcata again soon. SoCal alt. folky Farmer Dave Scher from Beachwood Sparks opens.

Got a package in the mail the other day with the new CD by Elephant Revival, a truly fine Colorado-based neo-acoustic quintet playing music they call "transcendental folk." Twin fiddles intertwine with guitar and newgrassy banjo with voices in tight harmony -- very nice. Especially the opening track, "Point of You," where Bridget Law and Bonnie Paine take the lead singing a transcendental song about how you and I are pretty much the same thing. The album is called Break in the Clouds and that's what it's like, a ray of sunshine on an otherwise rainy day, warmth in a cold world. Elephant Revival is on the road and should roll into Arcata some time Saturday for a show at Humboldt Brews with The Bucky Walters opening, providing their own brand of heat.

Way back in the '50s the Bulgarian State Television Female Vocal Choir came together singing unusual not-quite-traditional East-Euro music with polyphonic and diaphonic harmonies. The 1966 record Le Mystère des Voix Bulgares brought them attention from a wider world. When that record was revived by the hip Brit label 4AD in the '90s, the haunting singing inspired a new generation. Fast-forward to now and you have Kitka, an all-woman a cappella ensemble based in the Bay Area, exploring the same sort of harmonic territory but making it their own. The ladies are in town this weekend for a show Saturday evening and a workshop Sunday morning, both at the Arcata Playhouse. Prepare to be haunted.

Portland band-o-the-week is Truckstop Darlin, a honky tonk alt. country quartet with crying pedal steel. They play songs about "Tired Old Prom Queens" and the like Saturday night at the Alibi with like-minded locals Side Iron opening.

Still recovering from the massive 2nd anniversary party with Z-Trip and Kraddy, Nocturnum gets mellower Saturday with Djiin, a cool Django-gypsy-jazz/funk outfit out of Santa Rosa. The recently ubiquitous opening act Berel Alexander Ensemble plays first. Fans of Absynth Q (who are off somewhere on a U.S. tour) should dig this show.

The Red Fox rolls on with World Famous presenting Ott and Phutureprimitive and a big stack of bass on Thursday. Friday That's How We Roll brings the hip hop with Scarub from Living Legends, Toki Wright from Rhymesayers and Humboldt's own Never Die. Mushroom jazz man Mark Farina is back spinning acid jazz-ish electronica at the Red Fox next Wednesday, April 13.

Strix Vega returns to Blue Lake on Friday for another free show, this time at the Logger Bar, joined by their friends The Trouble, who tell me this is the start of their dive bar tour. Ah, the long, hard road to Coachella.

Friday at the Eureka Inn's Palm Lounge catch vocalist Christina D'Alessandro with St. John Hunt on acoustic guitar and breezy Jenifer Breeze on piano. "My first performance on the keys," says Jenifer. We're getting grief on Facebook for missing St. John's Mirage F-Mac tribute last week (coupled with a pitch for Saint's other cover project, Creamed, a tribute to, well, it's obvious. Coming next Thursday).

Tribute madness continues this week with House of Floyd back in town Saturday bringing their laser-powered take on all things (Pink) Floyd to the Arcata Theatre Lounge.

Friday night the ATL has a different sort of cover band as the venerable Humboldt State Marching Lumberjacks present their Spring Concert, offering rollicking versions of all sorts of songs from Hendrix tunes to the classic Muppet Ernie cover that somehow became the L-Jacks signature, "Rubber Duckie."