Organized chaos in the garden 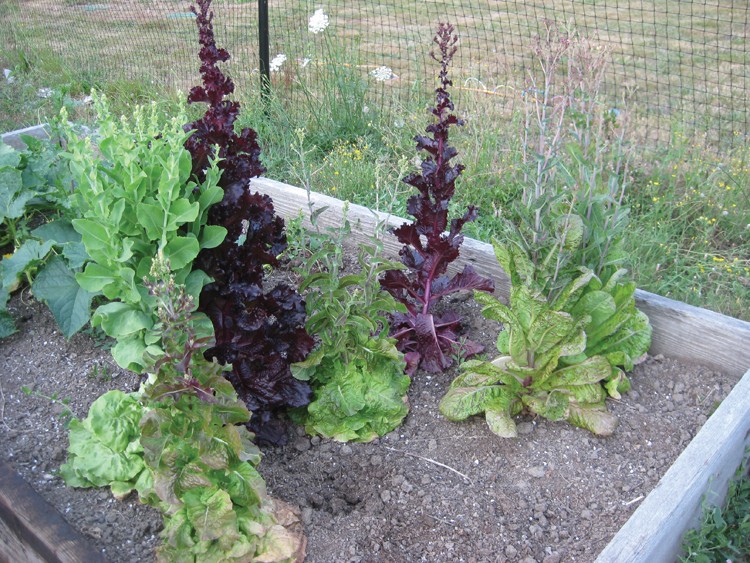 The expression "gone to seed" usually has a negative connotation, meaning disheveled, declining or otherwise post-prime. When vegetable or herbs go to seed, or "bolt," they quit being what you planted and become gangly towers looming over the garden. In this respect they're more like teenagers than elders, but anthropomorphisms aside, the plant's formerly edible parts are now shriveled, bitter and woody. While this can understandably look like a bad end for your endive patch, crops that are going or have gone to seed can still play an important role in the garden.

A garden plant that has run its course and produced seeds is, naturally, a source of seed. Depending on the plant's propensity to crossbreed, the seeds it produces might be true to the parent, or a mix of parent and some similar plant. (For this reason it's inadvisable to replant seeds from garden squash, because squash hybrids can be foul tasting or poisonous.) Or the seed might be sterile and not sprout at all.

Seed saving is another discussion, full of complexity and art, and it's more commitment than I care to take on personally. [See editor's note.] Instead, when the greens bolt I simply let the seeds fall where they may. If any of them happen to sprout next month, or next spring, great -- any time a yummy plant wants to grow up between my garlic or tomato plants is fine with me. I'd much rather have edible crops volunteering themselves than many of the weeds I know.

The first plants to bolt are generally the leafy cold-weather plants like spinach, lettuce, escarole and cilantro, and they make their moves when spring turns to summer. The newly aged old farts crowd the garden with their blossomed stalks, providing cooler, moist shade that allows the later blooming plants to maintain their tender youth a little longer. Newly sprouted plants are thus sheltered as well.

Perhaps most importantly, the flowers attract pollinators. The nation's bee population is currently plagued by mites, viruses and neonicotinoid-based pesticides, all of which have been implicated in die-offs, and may play roles in colony collapse disorder. This dire situation is alleviated, if only slightly, by a pesticide-free garden gone to seed, which can provide a safe, nourishing haven for imperiled bees. My bolted garden is practically a gridlock of bee traffic, which helps the garden become a place of interaction between interdependent segments of the greater ecosystem. Watching bees patronize the newly opened blossoms is hardly a buzz-kill.

A garden gone to seed, with young plants growing in the shade of old-growth annuals, is a diverse ecosystem, but diversity has its drawbacks. Bees aren't the only critters that prefer dense polyculture to boring monoculture. Disease and pest problems may increase. As your plants fill out and crowd together, they won't be able to grow as large as they would if they had more room. If your singular goal is to pull as many pounds of food from the garden as possible, then letting plants bolt might not be the game for you.

Few gardens, however, are about production alone; they feed more than just your belly. A diverse garden, with different types and ages of plants, is interesting. A garden gone feral can blur the line between growing food and gathering it. A trip to the garden starts to feel like entering the forest with your basket to see what you can find. When you push the bolted radicchio aside to find a young head of hidden lettuce, it feels like a gift.

I take care throughout the season to create this kind of luck, by casting handfuls of seeds every which way, in both spring and summer. Mostly I toss seeds for greens, herbs and carrots, all of which can be planted throughout the summer for a fall crop, and all of which do well in partial shade. When I happen upon an unexpected parsley patch or grove of carrots, the fact that I had scattered their seeds there, or allowed their parents to bolt, doesn't diminish the thrill of discovery. But as you'd expect, hurling seeds randomly at the garden won't result in orderly rows. Those who like their garden linear and neat should avoid this tactic.

There's a fine line between letting your garden go to seed and simply abandoning it. I call the former "managed chaos." You may need to pull some plants that are crowding or shading certain other plants. Bolted plants might block a sprinkler or attract unwanted pests or draw birds that shit on your parsley as they eat cilantro seeds. You may choose to let only a select few bolted plants stick around, like islands in an otherwise orderly garden.

Managed chaos probably doesn't fit most people's idea of what a well cared for garden should look like. And to be honest, while it looks good to me, I often find myself slightly embarrassed when I show my garden to others, and feel compelled to blurt out why I actually intentionally chose to let the garden go to seed. In the end, gardens, like pets, often come to reflect their owners. Some value appearance above all else. Others care more for an interesting personality. Some, like me, use the garden to explore the greater ecosystem, as a source of adventure and surprise. Gardening, especially bolted vegetable and herb gardening, may not pay for itself in the cold economic calculus of input versus return. But as entertainment it's a lot cheaper, and more enlightening, than a trip to Disneyland.

Editor's note: For those who want to learn about saving seeds locally, Jared Zysto of the Organic Seed Alliance presents an introductory workshop, Seeds For Life, walking you through the basics including harvesting, cleaning and storing your seeds, self pollinators, cross pollinators and isolation techniques. The workshop is on Sunday, Aug. 20, from 1-3 p.m. at Beneficial Living Center, 148 South G St., Arcata; cost $15. Further details at 449-9103.